A line disclosing added sugars with a corresponding percent-Daily Value on updated Nutrition Facts labels should help consumers reduce their risk of obesity, type 2 diabetes, and heart disease, according to the Center for Science in the Public Interest. First Lady Michelle Obama will announce today that the Food and Drug Administration has finalized its long-awaited rule for the revised labels in a speech in Washington at the Partnership for a Healthier America’s annual summit. 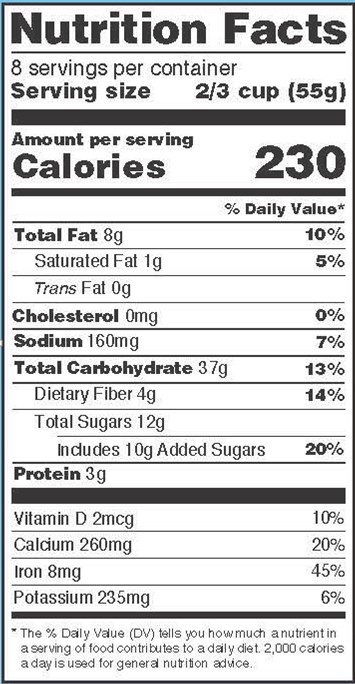 The new Daily Value for added sugars on the revised labels will be 50 grams, or about 12 teaspoons—an amount representing 10 percent of the daily 2,000 calories recommended for many adults. Once the rules are implemented, the Nutrition Facts label on a 20-ounce bottle of Coke, for example, would likely show that it had 130 percent of the added sugars limit for a day. The new labels will help consumers looking at labels for things like yogurt, jams, or cereals know how much of the sugar comes from fruit or milk, and how much comes from high-fructose corn syrup or other added sugars.

"Right now, it's impossible for consumers who look at a Nutrition Facts label to know how much of the sugar in foods is added and how that amount fits into a reasonable daily diet," said Michael F. Jacobson, president of CSPI, which first petitioned the FDA to put added sugars on Nutrition Facts labels in 1999. "Besides helping consumers make more informed choices, the new labels should also spur food manufacturers to add less sugar to their products."

The revision announced today represents the first comprehensive overhaul of the Nutrition Facts label since its appearance on packaged foods in 1994 as a result of the passage of the 1990 Nutrition Labeling and Education Act. Besides spearheading efforts to pass the NLEA, CSPI also petitioned the FDA to make the only other change to the labels since its inception — a line for trans fat that became mandatory in 2006. When the FDA first proposed revising Nutrition Facts labels in 2014, the proposal included a line—but no Daily Value—for added sugars. In comments on the proposed rule in August of 2014, CSPI argued that without a percent DV, consumers wouldn’t know how much of a day’s worth of added sugars a serving of a food contained. In July of 2015 the FDA proposed a Daily Value for added sugars.

The new Nutrition Facts labels also give more visual emphasis to calories and will no longer have a reference to “calories from fat,” reflecting the new understanding that saturated and trans fat increase the risk of heart disease, while polyunsaturated fats and oils can reduce that risk. The labels will make voluntary the declarations for vitamins A and C, of which most Americans get plenty, but declarations for potassium and vitamin D will be required. The new rule lowers the Daily Value for sodium slightly, from 2,400 mg per day to 2,300 mg per day (CSPI would have preferred a more protective Daily Value of 1,500 mg per day).

The FDA also adjusted some serving sizes to reflect amounts typically consumed. Thus, the serving size of ice cream will be two-thirds of a cup instead of half a cup and labels will show proportionately increased calories, saturated fat, added sugars, and so on. The serving size for soft drinks will increase from eight ounces to 12 ounces. The serving size for bagels, toaster pastries, and muffins (except English muffins) will increase from two to four ounces. And single-serving packages of foods that weigh up to (but not quite) twice the standard serving size will be considered just one serving. Hence, a 20-oz. bottle of soda will have to be labeled as one serving.

"Americans concerned about nutrition and their health owe a special debt of gratitude for the role played by the First Lady of the United States," Jacobson said. "Michelle Obama's leadership accelerated these updates to Nutrition Facts labels, and the helpful changes will be a major part of the Obama Administration's food policy legacy, along with improving school foods, eliminating artificial trans fat, putting calorie counts on chain restaurant menus, and spurring positive progress by the food industry."