More than 15 years after the Center for Science in the Public Interest worked with a Maine state legislator to introduce the first menu labeling policy, and eight years after the passage of the national menu labeling law included in the Affordable Care Act, calorie counts will become mandatory on menus and menu boards, and for food on display in chain restaurants, supermarkets, convenience stores, and movie theaters, on Monday.

The milestone caps a campaign started by the nutrition and food safety watchdog group in 2002 to help consumers make informed choices when eating out—which has become increasingly important at a time when Americans are getting a third of their calories away from home. 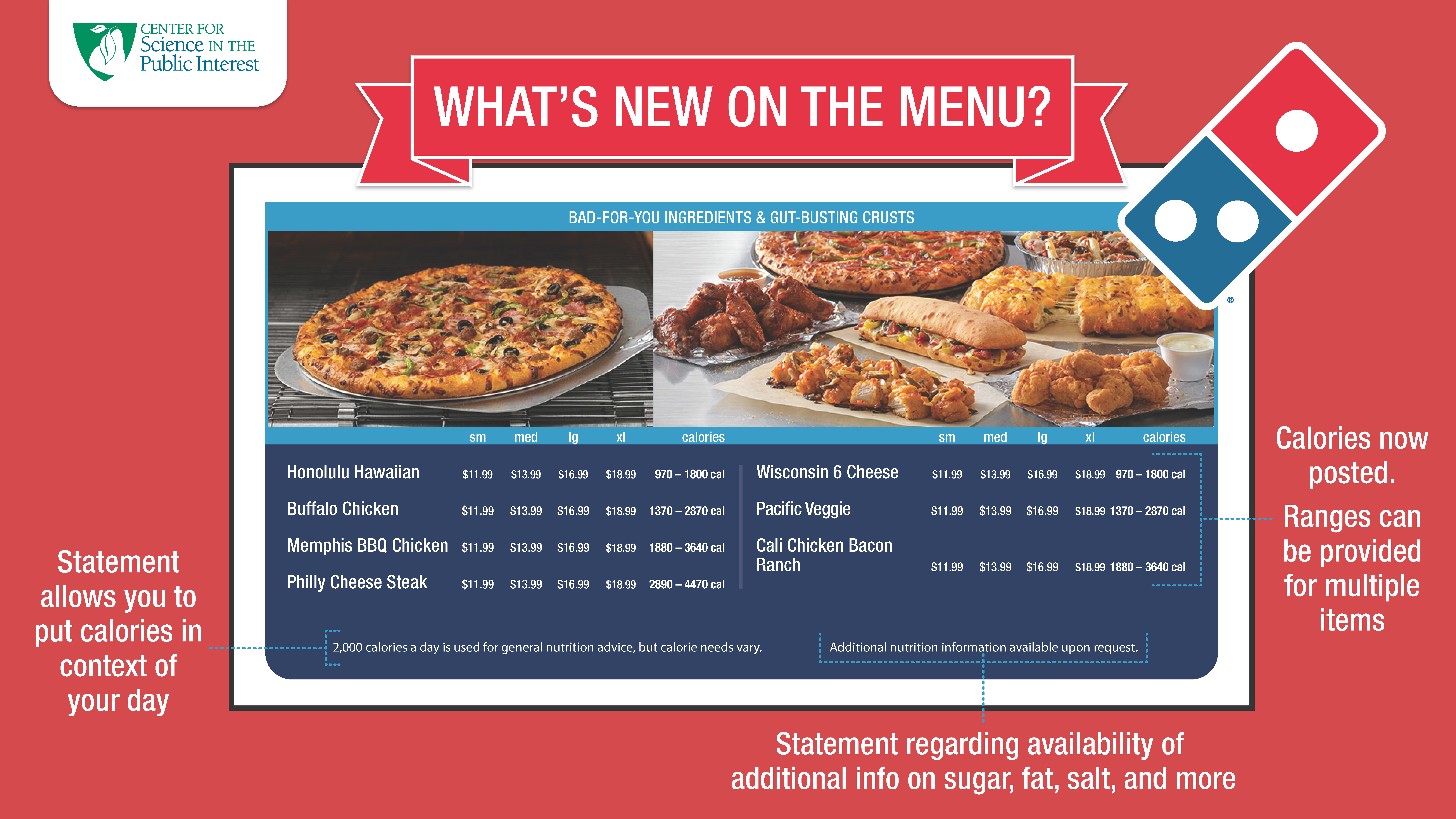 An example of what consumers can expect to see on menus that comply with the menu labeling rule. Click to enlarge.

In 2006, New York City became the first jurisdiction to adopt calorie labeling on chain restaurant menus and menu boards. After several court challenges, the law was implemented in 2008.  Later that year, California passed the first state-wide menu labeling law.  In all, more than 20 states, counties, and cities have enacted menu labeling policies.

In 2010, CSPI lobbied for, and the National Restaurant Association supported, the inclusion of national menu labeling in the Affordable Care Act.  FDA regulations implementing the law faced several years of delay before and after being finalized in 2014. CSPI and the National Consumers League, represented by lawyers at the nonprofit group Earthjustice, filed suit in 2017 challenging the most recent delay of menu labeling regulations, resulting in a court-approved agreement with the Trump administration securing Monday, May 7, 2018, as the implementation date.  The law also requires calorie labeling on more than 99 percent of the nation’s five to six million vending machines, which went into effect on December 1, 2016.

“Americans deserve to know what they’re getting when ordering for themselves and their families at chain restaurants, supermarkets, and other food establishments,” said CSPI vice president for nutrition Margo G. Wootan, who was named by Eating Well magazine as an “American Food Hero” for her leadership of CSPI’s menu labeling campaign. “Menu labeling allows people an easy way to cut hundreds of calories or more with simple, split-second decisions.  Choosing the Four Cheese Pasta, with 1,190 calories, over the Louisiana Chicken Pasta, with 2,330 calories, at The Cheesecake Factory, for example, saves more than 1,000 calories. At Starbucks, a grande Caffè Mocha with whole milk and whipped cream has 400 calories—five times as many as a grande nonfat Cappuccino, with 80 calories.”

The full impact of menu labeling will be clearer once the national menu labeling policy goes into full effect.  A recent review of nearly 30 studies from the well-respected Cochrane Collaboration found that menu labeling helps people reduce their calories by about 50 calories per meal, on average.  Menu labeling also has been shown to spur restaurants to reduce the calories in their foods.

In addition to seeing calories on menus, people can ask for information about sodium, saturated fat, sugar, and other nutrients, which must be made available in writing.  Menus and menu boards must also put the calorie numbers into context, by posting a statement that “2,000 calories a day is used for general nutrition advice, but calorie needs vary.”

A number of restaurant chains, including McDonald’s, Panera, and Starbucks, rolled out menu labeling nationally as more state and local policies passed, and by May 2017 (the original national implementation date), all of the top chains were providing calorie information in-store or online.  Yet some less cooperative chains, notably Domino’s, and the supermarket and convenience store industries have sought to weaken menu labeling via legislation. 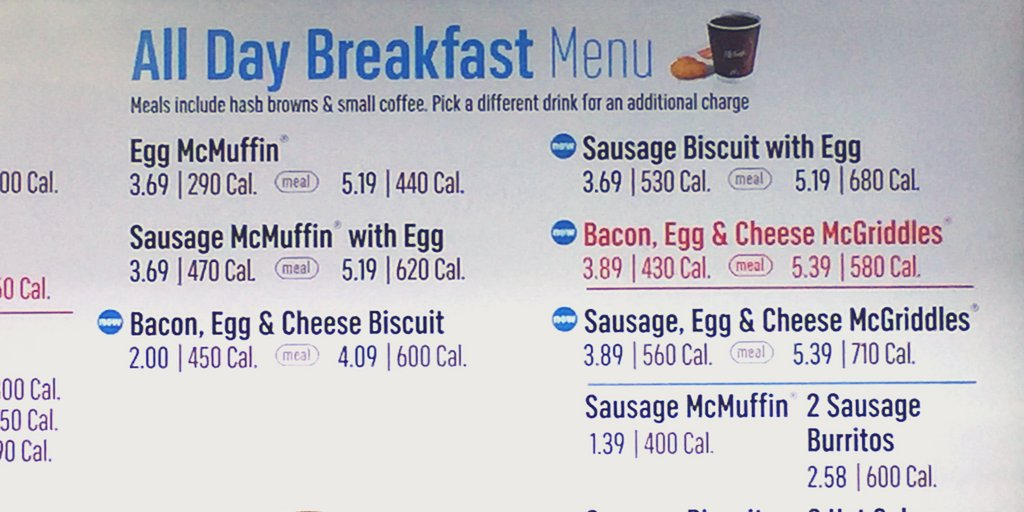 A portion of a McDonald’s breakfast menu showing options ranging from 290 to 710 calories.

“Consumers want better information about decisions that affect their health, and that’s why calorie counts have been so popular since we first introduced them in New York City,” said former New York City Mayor Michael Bloomberg, under whose administration the first menu labeling requirement was adopted, and who currently serves as the World Health Organization’s Global Ambassador for Noncommunicable Diseases.  “The Center for Science in the Public Interest helped spearhead menu labeling from its infancy, and thanks in no small part to their leadership, it’s now the law of the land.”

“One of my proudest moments serving the people of Connecticut and our nation was getting common-sense menu labeling included in the Affordable Care Act,” said Rep. DeLauro.  “The changes going into effect next week give Americans the tools they need to make healthy choices. With rates of obesity and diabetes at crisis levels across the country, consumers deserve to know how many calories are in the food they are buying. After eight years of delays, industry pushback, and lawsuits, this pro-consumer policy is long overdue.”

“Just as Nutrition Facts labels ushered in a new era of transparency in the supermarket, menu labeling brings new transparency to America’s chain restaurants,” Harkin said.  “Besides encouraging chains to offer healthier options—which they continue to do—calories on menus will reduce both the physical and financial costs of diet-related disease.”

“Menu labeling is the first step in bringing nutrition into restaurants, which are a big, and all too often problematic, part of Americans’ diets,” said Wootan.  “Next up is improving restaurant children’s meals.  We’ve worked with half a dozen restaurant chains and a dozen communities to drop sugary drinks from kids menus, with bills moving in Vermont, California, Hawaii, and cities around the country.”