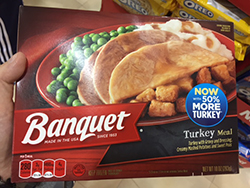 If fully achieved by the food industry, the voluntary sodium-reduction targets released today in draft form by the Food and Drug Administration could help prevent tens of thousands of premature deaths annually from heart attacks and strokes and tens of billions of dollars in medical costs, according to the Center for Science in the Public Interest. The guidance to industry proposes appropriate levels of sodium in 150 categories of processed and restaurant foods. Once finalized, interim targets are set to be met in two years, and more ambitious targets are set to be met in 10 years. The guidance proposes maximum sodium levels for each of the categories of foods, as well as sales-weighted average levels for companies to meet.

The targets are part of the FDA’s response to a lawsuit that CSPI had filed against the FDA last October seeking action on a 2005 petition in which CSPI asked the agency to reduce excess sodium—mostly from salt—in the food supply. In addition to the draft guidance, the FDA today formally denied CSPI’s petition that asked for mandatory, instead of voluntary, standards. Representing CSPI in court are Public Citizen attorneys Julie Murray and Allison Zieve.

“We hope that industry will work cooperatively with the FDA and health experts to achieve the proposed reductions, which would benefit the health of all Americans,” said CSPI president Michael F. Jacobson. “While this is a voluntary approach as opposed to the mandatory approach we asked for and that the Institute of Medicine endorsed, it provides clear goals by which companies can be held accountable. And, it helps level the playing field for those companies that are already trying to use less salt in their foods.”

CSPI’s 2005 petition asked the FDA to revoke salt’s status as a “generally recognized as safe,” or GRAS, substance, and to treat it as a food additive under the law. The petition specifically asked the agency to require manufacturers to gradually reduce the amount of sodium in different categories of processed food, and to require health messages on retail packages of table salt one-half ounce or larger. Countries from Argentina to South Africa to Turkey have set limits on major sources of sodium, while Finland requires a warning notice on high-sodium foods. In the United States, New York City requires restaurants to place warning symbols next to menu items that provide at least a whole day’s worth of sodium.

“The Obama Administration has led many public health initiatives that will improve the way Americans eat for many years to come,” Jacobson said. “If industry takes these targets seriously, this initiative could have the biggest impact.”

CSPI has been calling on the FDA to protect Americans from excess sodium consumption for decades. In 1978, it first urged the agency to revoke salt’s GRAS status. After several years of inaction and a 1983 lawsuit by CSPI, the agency promised to consider additional regulatory actions to reduce sodium if the food industry failed to reduce sodium sufficiently on its own. The court in that case indicated that the FDA would be required to make a decision on salt’s GRAS status after voluntary efforts had been given sufficient time to be assessed. In 2005 CSPI discovered that sodium levels had remained essentially unchanged over the previous 20 years so again sued the agency in February of that year for its failure to act to protect public health, but the court said that the organization would need to re-file a petition before the court would consider the case. CSPI filed its 2005 petition in November of that year.

An April 2016 market basket survey conducted by CSPI of 451 packaged and restaurant foods found a slight four percent reduction in sodium over a 10-year period. It found dramatic variations in sodium content among different brands of a given food. Arnold Stone Ground 100% Whole Wheat bread had 49 percent more sodium than Pepperidge Farm’s Farmhouse Soft Whole Wheat bread, for instance. Hunt’s Diced Tomatoes had 60 percent more sodium than Del Monte Diced Tomatoes. General Mills, Mars, McDonald’s, Nestlé, and Walmart have each made concerted commitments to reduce sodium across their product lines. Mars, Nestlé, PepsiCo and Unilever have all shown leadership by calling on the FDA to release the targets, according to CSPI.

While a few widely criticized researchers have opposed the lowering of sodium, the Institute of Medicine, Dietary Guidelines for Americans, American Heart Association, American College of Cardiology, and the World Health Organization have recommended that companies reduce sodium levels in their products and that people eat lower sodium diets.