Letter Submitted to FDA and FTC 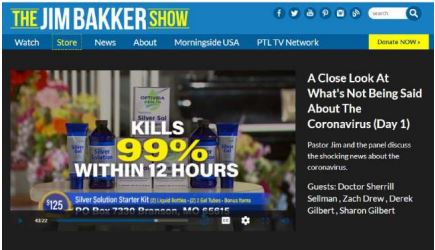 Televangelist Jim Bakker is using his show to advance the claim that the Silver Solution dietary supplement products available in his online store can now cure the coronavirus “within 12 hours.” The preacher previously claimed the same product cures “all venereal diseases” and HIV. The nonprofit Center for Science in the Public Interest today called on the Food and Drug Administration and the Federal Trade Commission to take immediate enforcement action against the marketing of the products.

The jimbakkershow.com store advertises several varieties of gels, lozenges, and liquids that ostensibly contain a “patented nano-silver solution” or “purified silver,” ranging in price from $80 to $300 in various amounts. There’s no evidence that the element silver prevents or treats any condition, according to authorities such as the National Center for Complementary and Integrative Health, part of the National Institutes of Health, and the Food and Drug Administration. Silver taken orally also poses the risk of argyria, a condition that can cause skin to permanently develop gray or blue discoloration. The FDA and the Federal Trade Commission have previously sent warning letters to other companies marking colloidal silver as disease cures.

“When a new public health threat arises, set your watch,” said CSPI president Dr. Peter G. Lurie. “Whether it's anthrax, SARS, or swine flu, hucksters will emerge like clockwork to promote worthless pills and potions. Regulators at FDA and the FTC should act quickly to protect consumers from any supplement maker who claims their product will prevent, cure or ‘deactivate’ coronavirus.”

Because Bakker’s silver products are marketed for the prevention or cure of a disease—including coronavirus, HIV and venereal disease—the FDA should treat Bakker’s silver products as unapproved drugs, according to a CSPI letter to the agency. The FDA should also consider the products to be “health frauds,” triggering an FDA policy making such frauds a higher enforcement priority for the agency. Bakker spent a little more than five years in federal prison following his conviction in 1989 for mail fraud, wire fraud, and conspiracy.

The clip of Jim Bakker and his show’s regular contributor, naturopath Sherrill Sellman, was circulated by the @RightWingWatch twitter handle maintained by People for the American Way.

“This influenza, which is now circling the globe, you’re saying that Silver Solution would be effective,” Baker asked Sellman. “Well let’s say it hasn’t been tested against this strain of the coronavirus but its been tested on other strains of the coronavirus and has been able to eliminate it within 12 hours,” replied Sellman. “Totally eliminates it; kills it. Deactivates it.”

Despite being identified as “Doctor Sherrill Sellman,” Sellman is not a physician. Rather, she holds a “Doctor of Naturopathy” from Trinity College of Natural Healing, an unaccredited organization in Warsaw, Indiana. That means her endorsement of the product runs afoul of FTC regulations prohibiting the implication that a product’s endorser is a medical doctor when she or he is not, according to CSPI’s letter.

“Given the nature of the public health threat posed by the coronavirus and the attendant public concern, we urge immediate action by both agencies to halt this fraud on the public,” wrote Lurie and CSPI policy director Laura MacCleery to FDA Commissioner Stephen M. Hahn and FTC Chairman Joseph J. Simons. “We urge the FDA and FTC to issue warning letters and bring other enforcement actions that require cessation of sales of these and other such products and that would allow inspectors to seize products.  In addition, we urge the FTC to pursue refunds for customers who have purchased these products and to alert them of the health risks of consuming them.”

Promoting better policing of the loosely regulated dietary supplement industry is a recurring theme for CSPI. In recent months it has urged the FDA or the FTC to crack down on manufacturers of supplements selling pills marketed as opioid-withdrawal, smoking-cessation, or fertility aids. In September 2019, CSPI urged the FTC to take enforcement action against the supplement brand Relief Factor, which similarly identified a holder of a non-medical Ph.D., Sebastian Gorka, as “Doctor” in an ad for fish oil pills marketed for back pain—a violation of the same FTC rules governing “expert” endorsements.