According to the nonprofit Center for Science in the Public Interest, using toys to lure small children into McDonald’s is unfair and deceptive marketing and is illegal under various state consumer protection laws. CSPI today served McDonald’s a notice of its intent to sue, fulfilling a legal requirement of several states in which CSPI might bring the lawsuit.

“McDonald’s is the stranger in the playground handing out candy to children,” said CSPI litigation director Stephen Gardner. “McDonald’s use of toys undercuts parental authority and exploits young children’s developmental immaturity—all this to induce children to prefer foods that may harm their health. It’s a creepy and predatory practice that warrants an injunction.” 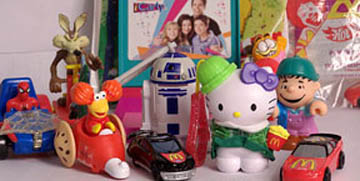 McDonald’s is currently offering children toys related to Dreamworks’ latest Shrek movie. (CSPI’s action is unrelated to the recent recall of McDonald’s Shrek drinking glasses contaminated with the toxic heavy metal cadmium.) While Shrek may appear on packaging for low-fat milk and Apple Dippers, when children or parents order Happy Meals they are given French fries 93 percent of the time, according to a CSPI study.

In 2007, McDonald’s made a pledge to an industry-funded self-regulatory group not to advertise to children meals that have more than 600 calories and no more than certain percentages of fat and sugar. Thus, the brief glimpses of actual food in McDonald’s youth-directed advertising, show Apple Dippers and low-fat milk as part of either a 4-piece Chicken McNuggets Happy Meal or a Hamburger Happy Meal. But toys, a powerful temptation for kids, are included with all Happy Meals, regardless of nutrition.

Of the 24 possible Happy Meal combinations that McDonald’s describes on its web site, all exceed 430 calories (430 is one-third of the 1,300- calorie recommended daily intake for children 4 to 8 years old). A Happy Meal of a cheeseburger, French fries, and Sprite has half a day’s calories and saturated fat (640 and 7 grams, respectively), about 940 milligrams of sodium, and about two days’ worth of sugar (35 grams). And even that meal might have come with a toy related to Star Wars, iCarly, How to Train Your Dragon, Night at the Museum, or, of course, Shrek. Getting children accustomed to eating burgers, fries, and soda puts them at greater risk of developing obesity, diabetes, or other diet-related diseases over the course of their lifetimes, according to CSPI.

"But regardless of the nutritional quality of what’s being sold, the practice of tempting kids with toys is inherently deceptive,” said CSPI executive director Michael F. Jacobson. “I’m sure that industry’s defenders will blame parents for not saying ‘no’ to their children. Parents do bear much of the responsibility, but multi-billion-dollar corporations make parents’ job nearly impossible by giving away toys and bombarding kids with slick advertising.”

“We know from scientific research that young children—and even older ones—do not have the ability to understand how marketing has been designed to influence them,” said Kathryn Montgomery, professor of communication at American University and an expert on media and children. “In the era of digital marketing, these vulnerabilities are magnified even further. McDonald’s use of these techniques raises troubling questions, for health professionals, parents, and policy makers.”

The practice of using toy promotions to promote fast-food to children is under scrutiny elsewhere, too. In May, the Santa Clara County, Calif., Board of Supervisors passed an ordinance preventing McDonald’s and other restaurants from including toys or other kid-oriented incentives with the purchase of unhealthy meals. And the Federal Trade Commission may have something to say about toy promotions when it releases a set of voluntary standards for food marketers later this year. According to a 2008 report from the FTC, food companies spend more than $350 million on toy giveaways each year.

“McDonald’s makes my job as a parent more difficult,” said Sheila Nesbitt, 36, a project manager from Champlin, MN, and a parent of a six-year-old boy and a three-year-old girl. “They market cheap toys that appeal to kids and it works. My kids always want to go to McDonald’s because of the toys. I try my best to educate my kids about healthy eating but it's hard when I am competing against the allure of a new Shrek toy.”

“McDonald’s marketing has the effect of conscripting America’s children into an unpaid drone army of word-of-mouth marketers, causing them to pester their parents to bring them to McDonald’s,” wrote Gardner in a notice letter to McDonald’s vice chairman, CEO, and president Jim Skinner, and McDonald’s USA president Jan Fields.

CSPI’s litigation unit has taken on food marketing to children before. In 2006, CSPI notified Kellogg that it would be sued for marketing sugary cereals and other junk food directly to children. After negotiating for more than a year, CSPI and Kellogg reached a historicsettlement agreement that set nutrition standards for the foods the company may advertise on media with young audiences. Since then, Kellogg only advertises to young audiences if a serving of the food has no more than 200 calories, zero grams of trans fat and no more than 2 grams of saturated fat, no more than 230 milligrams of sodium, and no more than 12 grams of sugar.

This is the first time that CSPI has planned to take McDonald’s to court.