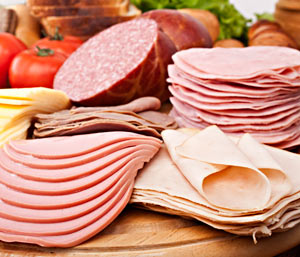 In a petition submitted to the U. S. Department of Agriculture (USDA) today, the Center for Science in the Public Interest and Consumer Reports called on the agency to stop requiring the terms “Uncured” and “No Nitrate or Nitrite Added” on labels for meat processed with nitrates or nitrites from non-synthetic sources, such as celery powder. The groups urged the agency to revise its rule because the labels are misleading and may give consumers the false impression that these products are healthier.

New tests of deli meats by Consumer Reports show how misleading the labels can be.  CR tested 31 packaged deli meats – name brands and store brands – including chicken, ham, roast beef, salami, and turkey. CR’s tests showed that nitrates and nitrites, which have been linked to cancer, are found in processed meats labeled “Uncured” or “No Nitrates or Nitrites Added” at similar levels to those prepared with synthetic curing agents such as sodium nitrite.

“The ‘Uncured’ and ‘No Nitrate or Nitrite Added’ labels could make people think these meats are healthier, but our tests show they are not,” said Charlotte Vallaeys, senior policy analyst at Consumer Reports. “Deli meats carrying these labels pose the same health risks as traditionally cured meats because the nitrate and nitrite levels are essentially the same.”

While the nitrate and nitrite levels found in CR’s tests fall below government limits for meat, labeling such products as “No Nitrate or Nitrite Added*” misleads consumers trying to avoid these substances.  The label on these meats also includes a statement “*Except those that are naturally occuring in [name of ingredient that is a source of nitrates or nitrites],” but that language is usually buried in fine print and doesn’t explain that those compounds are chemically identical to synthetic ones.

“Federal rules need to be updated to avoid misleading consumers,” said Sarah Sorscher, deputy director of regulatory affairs at CSPI.  “The USDA should end the confusion and help consumers make healthier choices by requiring accurate labeling of meats processed with nitrate and nitrite, regardless of the source.”

The groups are petitioning the USDA to revise its rules so that the “Uncured” and “No Nitrate or Nitrite Added” claims can only be made on meats prepared with no nitrates or nitrites from any source. Instead, the groups are urging the agency to require a disclosure stating “Nitrates or Nitrites Added,” with the source indicated in the ingredient list so consumers can take appropriate steps to protect their health.  They are also asking the USDA to take steps to minimize levels of residual nitrate, nitrite, and nitrosamines in meat processed with nitrates or nitrites, regardless of source.

“Curing” meat involves the addition of salt, nitrate, and/or nitrite to fresh-cut meats, which enables preservation by removing moisture and gives meat its distinct color, texture, and flavor.  Synthetic nitrites have been used since at least the 1920s to speed up the curing process. However in the late 1960s and early 1970s, it became clear that nitrate and nitrite could result in the formation of nitrosamines, some of which have been shown to be carcinogenic in animal studies.

In the 1990s, companies began developing new ways to cure meats with celery or other natural nitrate/nitrite sources.  Federal labeling rules require the new processed meats to bear the term “Uncured” and the statement “No Nitrate or Nitrite Added,” simply because they do not use synthetic curing agents, like sodium nitrite.

Many health-conscious consumers are now seeking to purchase meats prepared without the use of nitrates and nitrites. Consumer Reports conducted a nationally representative telephone survey of 1,000 U.S. adults in April 2019.  This survey asked Americans who eat deli meats if they typically try to buy ones labeled as “no nitrates added.” Forty-six percent say they look for this label claim when purchasing deli meats.

CR also asked respondents what best describes their feelings about the current “no nitrates added” label using the fine print stating that only naturally occurring nitrates are used. Forty-two percent of Americans say they would be confused about if or what type of nitrates are added in deli meats with this label.

The Center for Science in the Public Interest is America’s food and health watchdog.

Consumer Reports is an independent, nonprofit membership organization that works side by side with consumers to create a fairer, safer, and healthier world. For 80 years, CR has provided evidence-based product testing and ratings, rigorous research, hard-hitting investigative journalism, public education, and steadfast policy action on behalf of consumers’ interests.