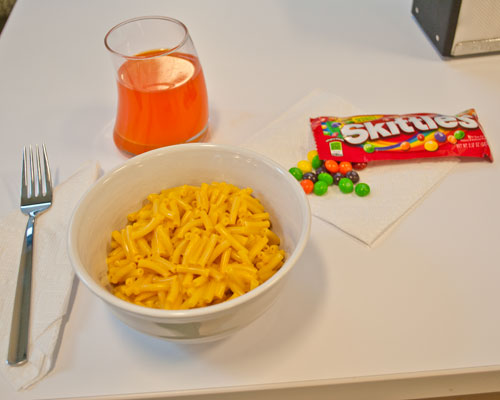 Many studies have shown that food dyes can impair children's behavior, but until now the amounts of dyes in packaged foods has been a secret. New research by Purdue University scientists, published in the journal Clinical Pediatrics, reports on the dye content of scores of breakfast cereals, candies, baked goods, and other foods. According to the nonprofit Center for Science in the Public Interest, the findings are disturbing since the amounts of dyes found in even single servings of numerous foods—or combinations of several dyed foods—are higher than the levels demonstrated in some clinical trials to impair some children's behavior.

General Mills' Trix cereal lists Yellow 6, Blue 1, and Red 40 on its ingredients list. But until now, no one would have known that Trix had 36.4 milligrams of those chemicals. Fruity Cheerios had 31 mg of food dyes, also some combination of Red 40, Yellow 6, and Blue 1. Of all the cereals tested, the one with the most artificial dyes was Cap’n Crunch’s Oops! All Berries, with 41 mg.

Target Mini Green Cupcakes, which have Yellow 5, Blue 1, Yellow 6, and Red 40, had 55.3 mg of artificial dyes per serving, the highest level found in any food. Red 40, Yellow 5, and Yellow 6 are the three most widely used dyes in the United States.

Skittles and M&M's, which are dyed with Blue 1, Blue 2, Yellow 5, Yellow 6, and Red 40, had the highest levels found in candies. Skittles Original had 33.3 mg per serving; M&M's Milk Chocolate had 29.5 mg per serving. Both candies are made by Mars, Inc.

The Purdue researchers noted that one of the largest sources of artificial dyes in the American diet is beverages. They found high levels of dyes in 8-ounce servings of some, including 18.8 mg in Full Throttle Red Berry energy drink, 22.1 mg in Powerade Orange Sports Drink, 33.6 mg in Crush Orange, 41.5 mg in Sunny D Orange Strawberry, and 52.3 mg per serving in Kool-Aid Burst Cherry. The beverage data were published in Clinical Pediatrics last September.

"Until now, how much of these neurotoxic chemicals are used in specific foods was a well-kept secret," said CSPI executive director Michael F. Jacobson. "I suspect that food manufacturers themselves don't even know. But now it is clear that many children are consuming far more dyes than the amounts shown to cause behavioral problems in some children. The cumulative impact of so much dyed foods in children's diets, from breakfast, lunch, dinner, and snacks, is a partial reason why behavioral problems have become more common."

According to the Purdue researchers, the amount of artificial food dye certified for use by the Food and Drug Administration has increased five-fold, per capita, between 1950 and 2012. The researchers estimate that a child could easily consume 100 mg of dyes in a day and that some children could consume more than 200 mg per day. Studies that tested much smaller amounts could easily have downplayed or missed entirely the effect of dyes on behavior.

"In the 1970s and 1980s, many studies were conducted giving children 26 mg of a mixture of dyes," said Laura Stevens, research associate in the Nutrition Science Department at Purdue and lead author of the study. "Only a few children seemed to react to the dyes, so many doctors concluded that a dye-free diet was pointless. Later studies using larger doses showed that a much larger percentage of children reacted. But some researchers considered those doses unrealistically high. It is now clear that even the larger amounts may not have been high enough. The time is long past due for the FDA to get dyes out of the food supply or for companies to do so voluntarily and promptly."

In 2008, CSPI petitioned the FDA to ban Yellow 5, Yellow 6, Red 40, and five other artificial food dyes, and in 2011, as an interim measure, urged the FDA to require front-of-package disclosures on packages of dyed foods. The British government and the European Union require warning labels on most dyed foods, which has almost eliminated the use of food dyes in Europe.

In 2011, the FDA acknowledged that food dyes (and other ingredients) cause behavioral problems in some children, but has done nothing to protect children. Still, mounting public concerns about dyes has spurred several major companies to remove dyes in some of their foods. Kraft has removed food dyes from some child-oriented varieties of its Macaroni & Cheese but not the most popular one. General Mills has removed dyes from Trix and Yoplait Go-Gurt yogurts. Chick-fil-A removed Yellow 5 from its chicken soup. Frito-Lay has removed dyes from Lay's seasoned and kettle-cooked chips, Sun Chips, and Tostitos. Pepperidge Farm has removed dyes from its Goldfish Colors crackers.