In comments filed today with the Food and Drug Administration, the Center for Science in the Public Interest (CSPI) argued for immediate implementation of the menu labeling final rule requiring calorie counts and other nutrition information on menus.

CSPI was also joined by nearly 50 other organizations in a letter opposing the administration’s delay or potential weakening of menu labeling.

Citing the 80 percent of Americans who support menu labeling, the comments suggest that more delay is both unnecessary and harmful to consumers who have a right to know how many calories are in their food, particularly since one-third of our calories come from foods we eat away from home.

On Tuesday, Aug. 1, CSPI and allies also delivered—with the help of children dressed as fruits and vegetables—more than 25,000 comments on the regulation to members of the U.S. Senate from concerned citizens of their respective states.  The comments opposed the administration’s delay and any changes to weaken menu labeling. 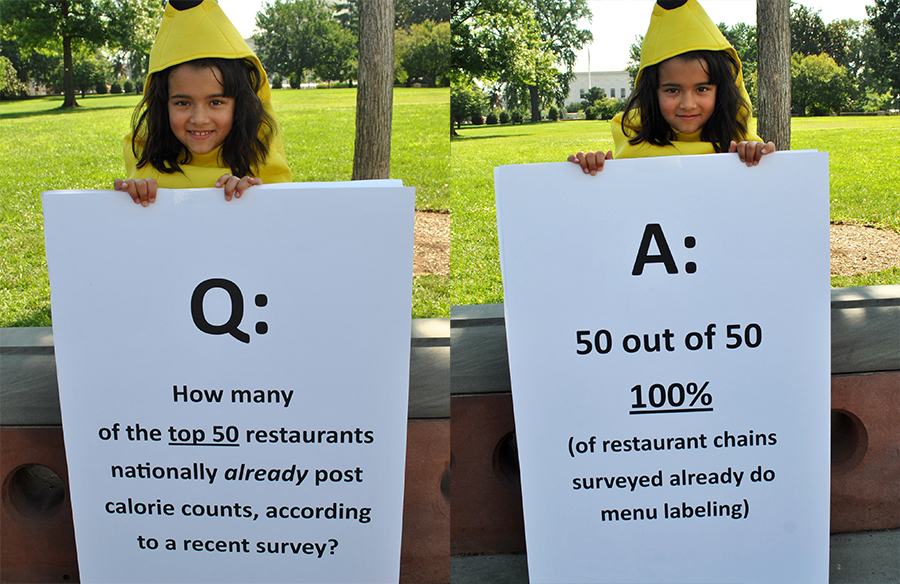 Interest by the public is intense: More than 60,000 comments from consumers were estimated to have been submitted to the FDA to date in opposition of further delay.

The vast majority of the top restaurant, supermarket, and convenience store chains already are labeling calories.  A recent survey of the top 50 restaurant chains in 2016 (by revenue, according to Nation’s Restaurant News) found that all 50 had calorie information either online or in the restaurant.  Many covered establishments, including supermarkets and convenience stores, are already complying with the menu labeling regulations as finalized, showing that posting calories is feasible and already widely prevalent.

In addition to the administration’s delay, industry continues to push its anti-menu-labeling bill, which was voted out of the House Energy and Commerce Committee last week.  The bill would let chains obscure nutrition information by using arbitrary and unrealistic serving sizes, and would let them put the information where few customers will see it.  If the anti-menu-labeling bill passes the House, we hope the Senate will reject it.

CSPI is a nonprofit organization supported by approximately 500,000 members and subscribers to its Nutrition Action Healthletter.  CSPI supported passage of the national menu labeling law, which was a bipartisan compromise supported by public health organizations and the restaurant industry that built on the momentum of more than 20 state and local policies.