The nonprofit Center for Science in the Public Interest and private law firms filed the suit charging that General Mills falsely markets Cheerios Protein as a high-protein alternative to Cheerios, when in fact the main thing that distinguishes Cheerios Protein from Cheerios is that the former has 17 times as much sugar.

Cheerios Protein boasts on the front of its box that it has 11 grams of protein; four of those grams come from the milk, leaving seven grams from the cereal. Original Cheerios has three grams of protein. That four gram difference represents a small amount of protein— just five percent of the average American’s intake. But much of that difference is attributable to differences in serving sizes. Cheerios Protein has a bigger, 55-gram serving size, whereas Cheerios uses a 27-gram serving size. Two ounces of each cereal have just about the same amount of protein.

The far larger nutritional difference between Cheerios Protein and Cheerios is sugar. A 1¼ cup serving of Cheerios Protein contains 17 times as much sugar as original Cheerios, which only has one gram of sugar per one-cup serving. In fact, Cheerios Protein Oats & Honey has eight forms of added sugars, including brown sugar, sugar, corn syrup, corn syrup solids, molasses, caramel (containing sugar and caramelized sugar syrup), honey, and refiner’s syrup.

And for a cereal with only a bit more protein but a lot more sugar, General Mills is charging a premium: Consumers pay about 70 cents more per box at stores like Walmart, Giant Foods, and Safeway.

CSPI’s complaint also says that General Mills’ marketing on television and the Internet for Cheerios Protein is false and misleading. One ad featuring NASCAR driver Austin Dillon takes a child into a Cheerios Protein stock car and has him “fueled up” and racing off to school.' 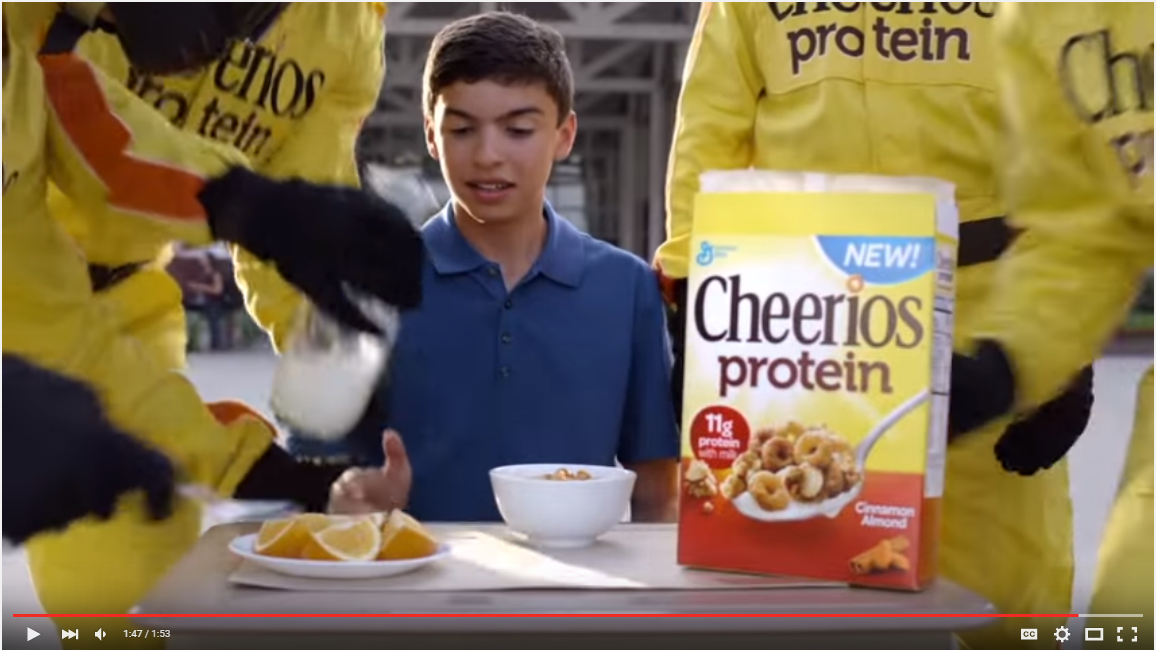 “A serving of Cheerios Protein, with its four teaspoons of sugar, has much more sugar than a typical cereal marketed to kids, such as Trix or Frosted Flakes,” said CSPI president Michael F. Jacobson. “They really ought to call the product Cheerios Sugar.”