"As you get older, [your brain] naturally begins to change, causing a lack of sharpness or even trouble with recall,” said a Prevagen TV ad. “In clinical trials, Prevagen has been shown to improve short-term memory." 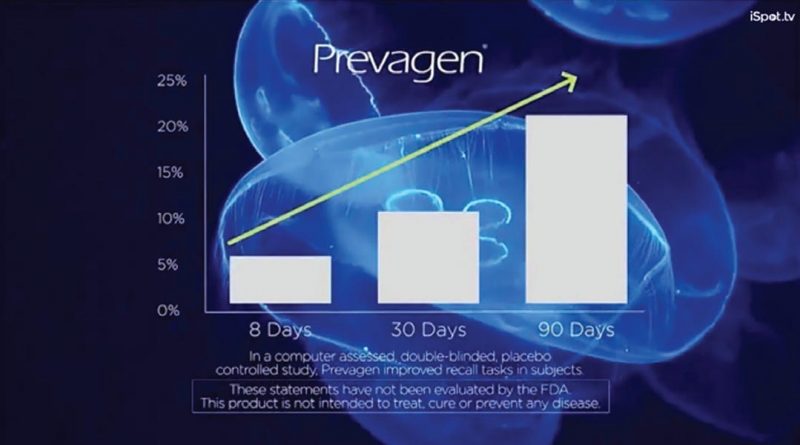 Wow. And just look at that steadily rising arrow on the ad’s graph! (It shows the Prevagen takers’ scores on a recall test after 30 and 90 days.)

The Federal Trade Commission steps in

In January 2017, the Federal Trade Commission and the New York State Attorney General sued the maker of Prevagen for its misleading ads.

“The marketers of Prevagen preyed on the fears of older consumers experiencing age-related memory loss,” said Jessica Rich, then-director of the FTC’s Bureau of Consumer Protection.

“But one critical thing these marketers forgot is that their claims need to be backed up by real scientific evidence.”

What about that graph in the Prevagen ad?

It comes from a study by Quincy Bioscience, which sells Prevagen.

Quincy’s employees randomly assigned 218 people to take either a placebo or 10 milligrams of Prevagen a day. After 90 days, the researchers found no difference between groups on the nine tests of memory or other thinking skills they originally planned to measure.

So they kept slicing and dicing the data, doing more than 30 additional analyses in subgroups of participants.

Finally, the researchers dug up the data for the graph in the ad (though they had to omit the results at 60 days, when the Prevagen takers did worse than the placebo takers, said the FTC).

What’s more, said the agency, Prevagen’s key ingredient “is rapidly digested in the stomach and broken down into amino acids and small peptides like any other dietary protein.” Translation: It never even reaches the human brain.

So why is Prevagen still on the market?

In September 2017, a federal judge dismissed the government’s lawsuit. But in February 2018, the FTC and New York State appealed. A year later, they won.

That means the lawsuit continues. Meanwhile, the ads keep running and people keep buying Prevagen. From 2007 to 2015, Americans bought about $165 million worth of the supplement.

Don’t waste your money on Prevagen.