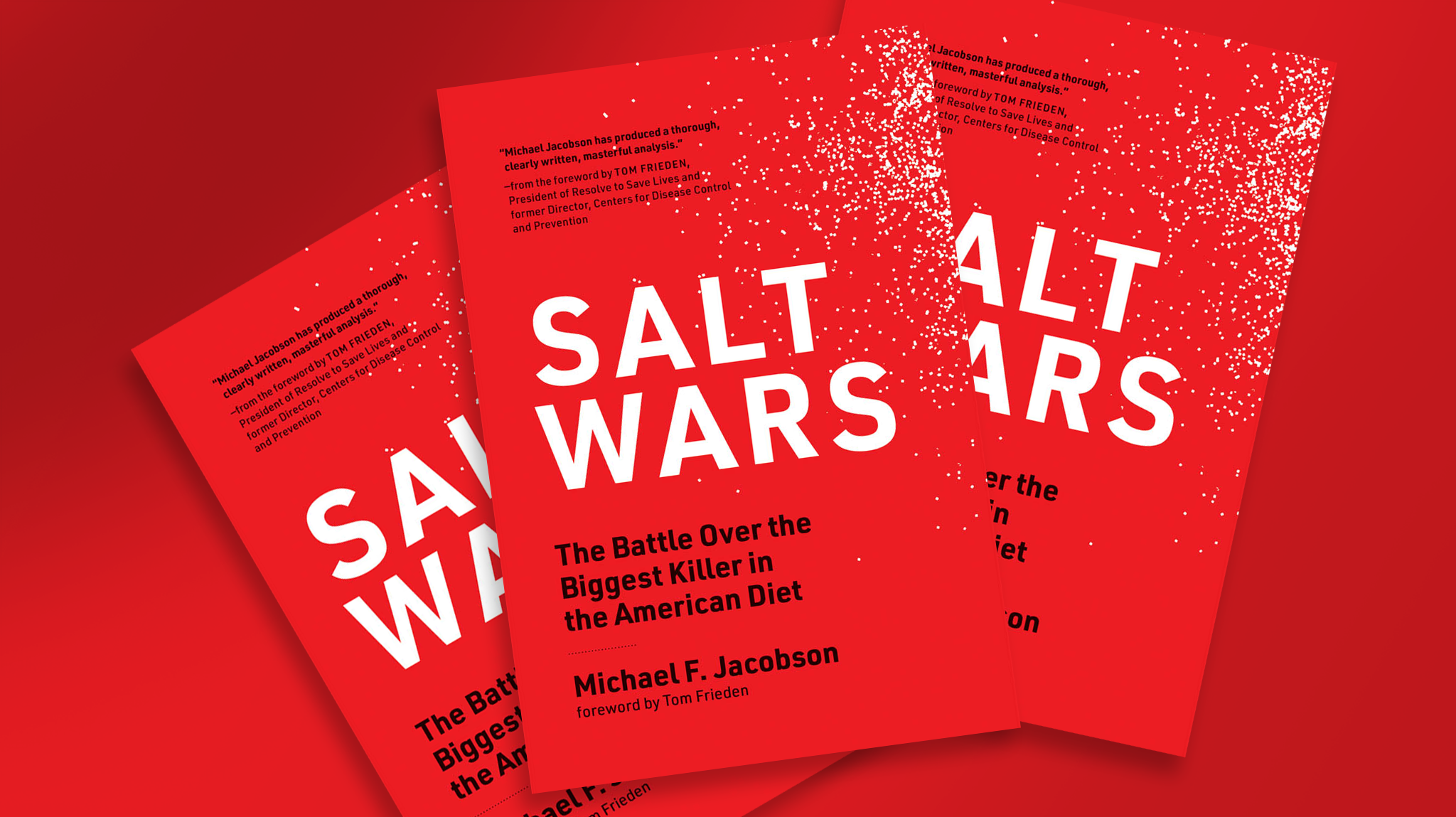 The story behind the staggering—and deadly—salt content in America’s processed and restaurant food, and our policymakers’ failure to curb it, is the subject of a new book by Michael F. Jacobson, Ph.D., the co-founder and former executive director of the Center for Science in the Public Interest.

Salt Wars: The Battle Over the Biggest Killer in the American Diet, will be published by the MIT Press on October 20. It both lays out a path to reduce sodium, mostly from salt, in the food supply to safe levels and, in the absence of action by government and industry, to enable consumers to cut salt on their own.

In Salt Wars, Jacobson explains how the food industry and a small group of scientists questioning the science of salt have successfully fought government efforts over the decades to reduce dangerous levels of sodium in our food. Their success has led to about $20 billion in unnecessary health-care costs and about 100,000 deaths per year due to preventable high blood pressure, heart attacks, and strokes. According to an unpublicized government memo that Jacobson obtained through the Freedom of Information Act, the Department of Health and Human Services estimated that the economic value of longer, healthier lives from lowering sodium consumption to about the recommended level would be $3.6 trillion over 20 years.

Jacobson, who holds a PhD in microbiology from MIT, is well-known for his nutrition advocacy over nearly half a century that helped eliminate artificial trans fat from the food supply, expose the enormous calorie counts of movie theater popcorn and many restaurant foods, and make Nutrition Facts mandatory on food packages.

Beginning in 1978, Jacobson has informed the public about the dangers of high-sodium diets and waged a campaign to persuade industry and the U.S. Food and Drug Administration to lower sodium levels in packaged and restaurant foods. Those efforts led to a 2010 National Academy of Sciences report calling for mandatory limits on sodium. Salt Wars gives a behind-the-scenes look at why it took six years for the FDA to propose voluntary, not mandatory, targets. Four years later, the Trump administration still has not finalized those targets.

The Trump administration has actually reversed progress by allowing more salt in school meals. However, a federal judge sided with CSPI, which argued that the administration acted unlawfully when it jettisoned the U.S. Department of Agriculture’s sodium targets.

And the salt wars continue.

For consumers, keeping sodium to safe levels is tough when some foods are shockingly high in salt. Salt Wars points out that Red Lobster’s Admiral’s Feast meal, with 5,000 milligrams (mg) of sodium, has more than twice the recommended daily intake (2,300 mg). The Cheesecake Factory’s Breakfast Burrito has 3,640 mg, or 1⅔ the recommended level. And AMC movie theaters’ Bavarian Legend Soft Pretzel is bulging with 7,600 mg, or 3⅓ days’ worth. It is foods like those that lead the average American to consume 3,400 mg of sodium per day—about one-third greater than the Department of Health and Human Services’ recommendation of 2,300 mg.

Likewise, reading labels and choosing packaged foods more carefully could help people cut their sodium intake, according to Jacobson. For instance, just switching from American cheese (470 mg per ounce) to Swiss cheese (50 mg) would save over 400 mg. Much poultry and red meat is infused with salty broth, which results in sodium levels several times higher than unsalted counterparts. On the other hand, a growing number of companies are cutting sodium by one-fourth or more by replacing some regular salt with potassium salt.

Salt Wars includes a foreword by Dr. Tom Frieden, former director of the Centers for Disease Control and Prevention, who called the book “a thorough, clearly written, masterful analysis.”

“Public health authorities advise eating less salt as a way to prevent high blood pressure, but a few scientists disagree,” said Marion Nestle, Professor of Nutrition, Food Studies, and Public Health, Emerita, New York University and author of Let’s Ask Marion. “For anyone confused by these arguments, Salt Wars is a must-read. Michael Jacobson has been fighting these wars for decades, and his assessment of the research on both sides—and the policy implications—is exceptionally fair, balanced, and fascinating.”