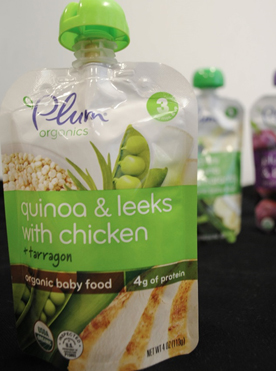 Plum Organics, a leading premium, organic baby and toddler food brand, today announced that it will modify the names of its baby and toddler pouches as well as tots snack bars, in response to feedback received from parents and a letter from the nonprofit Center for Science in the Public Interest.

In May 2015, CSPI contacted Plum with concerns that its labels were misleading. At that time, Plum was actively working to identify opportunities to refresh its labels. Since May, Plum has worked collaboratively with CSPI to accelerate its production timeline.

“Since Plum’s inception, we’ve focused on delivering the very best food from the very first bite and our work with CSPI helps us further that mission,” said Ben Mand, senior vice president, brand marketing and innovation at Plum Organics. “We’re constantly optimizing our portfolio based on consumer feedback and these changes are a direct reflection of that commitment.”

As part of the agreement with CSPI, Plum Organics will name its baby pouches in order of predominance of major ingredients. Imagery on product labels will also reflect predominance. The changes will be made on a rolling basis, to be completed by October 2016.

“Plum’s label improvements will be of enormous help to parents, who want to know at a glance what’s in the food they buy for their infants and toddlers and don’t have time to authenticate information on the front package by reading through every ingredient and disclosure on the back of the package,” said CSPI litigation director Maia Kats. “By naming its pouched products based on the predominance of major ingredients, Plum will help push the marketplace in the right direction. We are pleased with the seriousness and dedication with which Plum addressed the concerns we brought to them in May. We hope other baby and toddler food companies follow Plum’s leadership.”

The Center for Science in the Public Interest worked in conjunction with the law firm Reese LLP.

About CSPI
The Center for Science in the Public Interest (CSPI) is a nonprofit health-advocacy group based in Washington, D.C., that focuses on nutrition and food safety. CSPI’s Litigation Department focuses on false and misleading advertising of food products. CSPI is supported largely by the subscribers to its Nutrition Action Healthletter and by foundation grants.

About Plum Organics
Plum Organics is a leading innovator with the mission of inspiring a lifetime of healthy eating from the very first bite. Recognized for unique, culinary-inspired recipes and a modern approach to family nutrition, Plum offers a complete line of premium, nutritious organic baby food, toddler and kid snack products. Plum has dedicated its social mission to delivering nutrient rich, organic food into the hands of little ones in need across America.