Americans are eating too much of everything, and it’s not just how much, but what we eat, that needs work, according to a report card on the changing American diet published today in Nutrition Action Healthletter.  The average American consumes about 2,500 calories per day, according to the U.S. Department of Agriculture estimates.  That’s up from about 2,000 calories a day in the 1970s.

(Ed. note:  CSPI is hosting a quiz about America’s Changing Diet. Take it now, if you like, since spoilers follow.)

CSPI gave the American diet a D+ in the category of Meat, Poultry, & Seafood.  Chicken began edging out beef starting in 2004 but Americans still eat more red meat (beef plus pork, lamb, and veal) than white meat.  Red meats, especially processed meats like bacon, ham, hot dogs, and sausage, raise the risk of colon cancer, heart disease, and stroke.  CSPI gave Americans’ Fruit & Vegetable consumption a B-.  It’s clear that Americans are ignoring experts’ advice to fill half their plates with vegetables and fruits.  Vegetable consumption (minus white potatoes) climbed in the late 1980s but has been inching down since.  Fruit (minus juice) has been fairly flat.

CSPI gave Americans’ diet a C- on Grains, since we’re still eating far more (mostly white) flour in bagels, buns, tortillas, muffins, cupcakes, doughnuts, cookies, pasta, and pizza crust than in the 1970s. And although soft drinks—and added sugars—are down from their peak, CSPI issued a D+ on Beverages because sodas (which are mostly sugary, not diet) are still the dominant beverage. 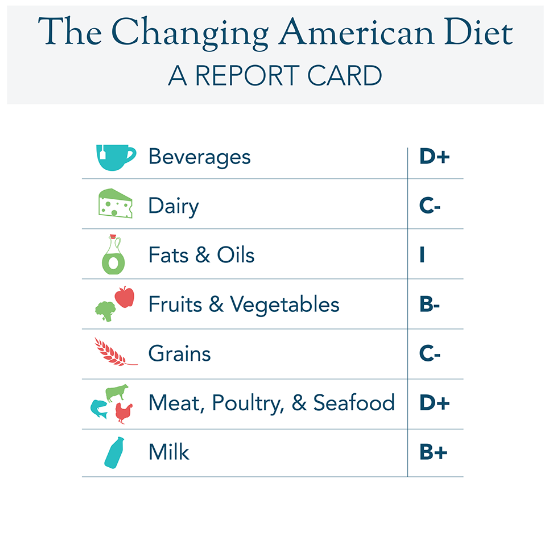 “It’s clear that Americans aren’t now following, nor have they ever followed, the advice dished out by the Dietary Guidelines for Americans and other health authorities,” said CSPI nutrition director Bonnie Liebman, author of the Nutrition Action article.  “Americans are eating the diet recommended by food manufacturers and restaurants’ marketing departments, which encourage overconsumption of everything except for fruits and vegetables.”

CSPI was forced to give the American diet a grade of “Incomplete” on Fats & Oils.  But that’s not consumers’ fault:  In 2011 the Census Bureau stopped collecting data on fats and oils—data that the USDA relied on for its estimates.  On the dairy front, cheese consumption is at an all-time-high with no sign of slowing down.  On the upside, yogurt consumption has doubled since 2000 and has quadrupled since 1985.

CSPI last graded the changing American diet in 2013.  Nutrition Action is published 10 times a year, and print and digital subscriptions are available at NutritionAction.com.