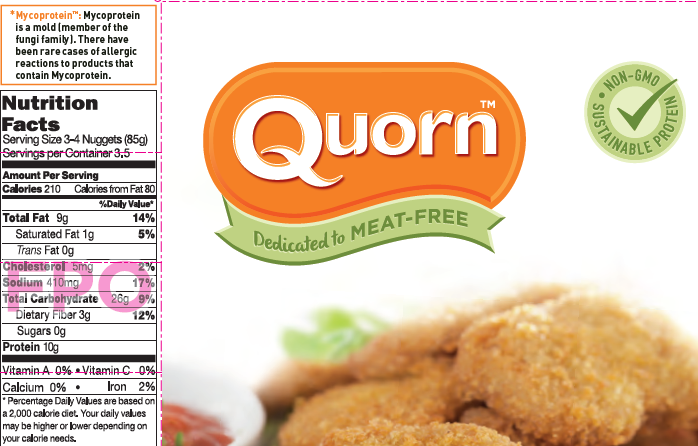 The maker of controversial fake meats comprised of vat-grown fungus will make several modifications to its labels, including a prominent disclosure that the principal ingredient in the products, mycoprotein, is processed mold.

Quorn’s mold is combined with other ingredients to make artificial “chick’n” or “turk’y” “cutlets” or “roasts,” as well as other products aimed at simulating ground beef.

The improvements to the label resolve class action litigation brought in federal court in the Central District of California accusing Quorn of deceptive marketing.  The nonprofit Center for Science in the Public Interest, which was not a party to the suit, filed an objection to a proposed settlement agreement in that case, Birbrower v. Quorn Foods, Inc.  CSPI argued that the proposed settlement would have judicially condoned continued deceptive labeling of Quorn by letting the company use the euphemism “mycoprotein” to disguise the fact that the main ingredient of Quorn is mold.  CSPI withdrew its objections after Quorn agreed to additional material labeling changes; the court then approved the settlement.

Labels for all Quorn products will now state that “Mycoprotein is a mold (member of the fungi family).  There have been rare cases of allergic reactions to products that contain mycoprotein.”

Some consumers have reported adverse reactions after eating Quorn, including vomiting, diarrhea, and, in rarer cases, life-threatening anaphylactic reactions.  CSPI raised concerns about Quorn’s unique main ingredient in the early 2000s and asked the Food and Drug Administration to remove the products from the marketplace.  CSPI has received approximately 2,500 reports from consumers of adverse reactions to Quorn products.  At least one death is alleged to have been caused by consumption of a Quorn product and is the subject of a wrongful death lawsuit.  Another death attributed to Quorn occurred in Sweden.  Both victims suffered from asthma.

Labels for all Quorn products will now state that “Mycoprotein is a mold (member of the fungi family).  There have been rare cases of allergic reactions to products that contain mycoprotein.”

“Consumers deserve to know that Quorn comes from mold, which sometimes causes serious gastrointestinal and breathing problems,” said CSPI litigation director Maia Kats.  “The labeling improvements we’ve negotiated with Quorn will help consumers understand what ‘mycoprotein’ is and that it sometimes does trigger adverse reactions.”