Jamba Juice smoothies are not what Jamba Juice claims and advertises them to be, according to a class action lawsuit filed in federal court. The company is facing allegations that it is tricking consumers by marketing its beverages as “whole fruit and vegetable smoothies” when, in fact, they often include juice blends made mostly from cheap pear and white grape juices from concentrate. Despite using statements like “Jamba blends whole fruits & veggies” and “Whole fruit! That’s how we blend” on marketing materials, Jamba Juice uses large quantities of juice blends, sherbet, and other non-whole fruit and non-whole-vegetable ingredients in its smoothies, according to the complaint. 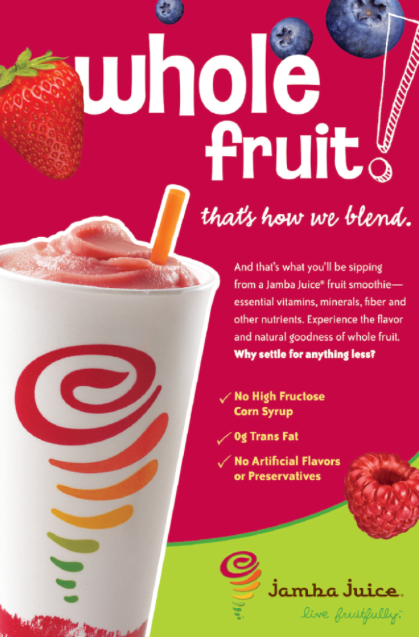 Jamba Juice represents on menu boards that its Caribbean Passion smoothie, for instance, contains five whole-fruit ingredients: mango, strawberry, peach, orange, and passion fruit. In fact, that smoothie appears to have no whole mango, no whole orange, and no whole passion fruit. Instead of those advertised fruits, Caribbean Passion has as its first ingredient a “Passion Fruit-Mango Juice Blend,” according to the company’s website.  And the blend is mostly pear and white grape juices from concentrate, according to the complaint. A large Caribbean Passion has 440 calories and a whopping 95 grams—or approximately 24 teaspoons—of total sugars. 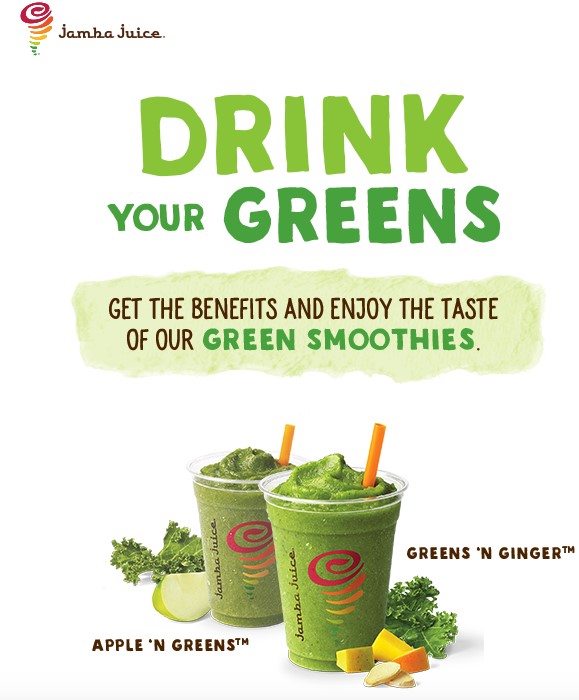 The company also makes prominent mention of “super ingredients” like kale in its marketing for its smoothies, when in fact, other cheaper ingredients predominate, according to the complaint. Advertising on social media and in emails urges consumers to “DRINK YOUR GREENS” and features images of kale and ginger root alongside Jamba’s Greens N’ Ginger smoothie. The menu board categorizes Greens N’ Ginger as a “Fruit & Veggie” smoothie and lists mango, peaches, kale, lemon, and ginger as ingredients. Yet despite abundant images of kale, “lemonade” is the first listed ingredient in Greens N’ Ginger, according to the company’s website. Even that un-advertised “lemonade” is largely comprised of white grape juice from concentrate.

“Jamba Juice’s advertising and marketing is aimed at giving consumers the impression that their smoothies will be mostly whole fruits and vegetables, like mango, passion fruit, or kale,” said Center for Science in the Public Interest litigation director Maia Kats. “In reality, consumers are paying premium prices for products that are primarily made of unadvertised, less nutritious, and cheap ingredients like pear and white grape juices from concentrate.”

The complaint also alleges that Jamba Juice gives consumers the impression that the only sugars in its smoothies are exclusively from whole fruits and vegetables and that the smoothies contain no additives, when neither of those facts are true. On Instagram, for instance, Jamba Juice posted: “NOT FAKE NEWS: Jamba blends only real, whole ingredients to power your day.” Jamba’s Aloha Pineapple smoothie, however, has pineapple juice from concentrate as its first ingredient, according to the company website.  Its third ingredient, “Pineapple Sherbet,” has more water, milk, sugar, corn syrup, whey, and cream than it does pineapple. A “Raspberry Sherbet” used in its Banana Berry smoothie also has more sugar and corn syrup than raspberries and contains additives such as mono- and diglycerides, locust bean gum, guar gum, and caramel color, among other ingredients.

The lawsuit was brought in United States District Court for the Northern District of California. Besides CSPI’s Kats, plaintiffs are represented by CSPI litigation associate Matthew Simon and Michael R. Reese and George Granade of Reese LLP. In recent years CSPI’s litigation unit has negotiated numerous improvements to the marketing and labeling of products such as Naked Juice, Cheerios Protein, and Plum Organics baby food.