Update: Since the FDA has confirmed the lettuce in the lot expired by July 24, CSPI has lifted its recommendation that consumers avoid romaine.​

The Food and Drug Administration should publish the names of retailers who received romaine lettuce covered in the recent Fresh Express recall. The romaine was implicated in a Cyclospora outbreak traced to McDonald’s salads. So far, according to the Centers for Disease Control and Prevention, 286 people in 15 states have become ill in the outbreak. There have been 11 hospitalizations and no deaths.

The FDA confirmed the presence of Cyclospora in a sample of Fresh Express salad mix distributed to McDonald’s. The mix contained carrots and romaine lettuce. (McDonald’s says that it has stopped selling salads at affected outlets until it can switch to another supplier for its lettuce blends.) While Fresh Express indicated that the carrots used in the mix were only sent to McDonald’s, an announcement on July 30 by the U.S. Department of Agriculture confirmed that chopped romaine from the same lot as the positive sample had also been distributed to other stores, including Kroger, Trader Joe’s, and Walgreens. Expiration dates ranged from July 18 through July 23. But the recall may be wider, since salads that did not include meat would not have been covered by the USDA announcement.

Fresh Express, which has initiated a recall, has confirmed to the FDA that the affected romaine was not sold directly to consumers under the Fresh Express brand. But neither Fresh Express nor the FDA has published the names of retailers other than McDonald’s who may have received lettuce from the affected lot and sold it to consumers under different brand names. Their public statements also do not confirm whether the outbreak is limited to chopped romaine lettuce, and do not provide specific sell-by dates beyond those included in the USDA announcement.

Until the retailers’ names are published, CSPI is advising people to avoid eating romaine lettuce unless they can confirm with the retailer that it was not included in the Fresh Express recall. Recalled lettuce may be in consumers’ refrigerators, and people who have eaten the lettuce may remain at risk due to the length of Cyclospora’s incubation period. Consumers who have purchased romaine lettuce should throw it away. 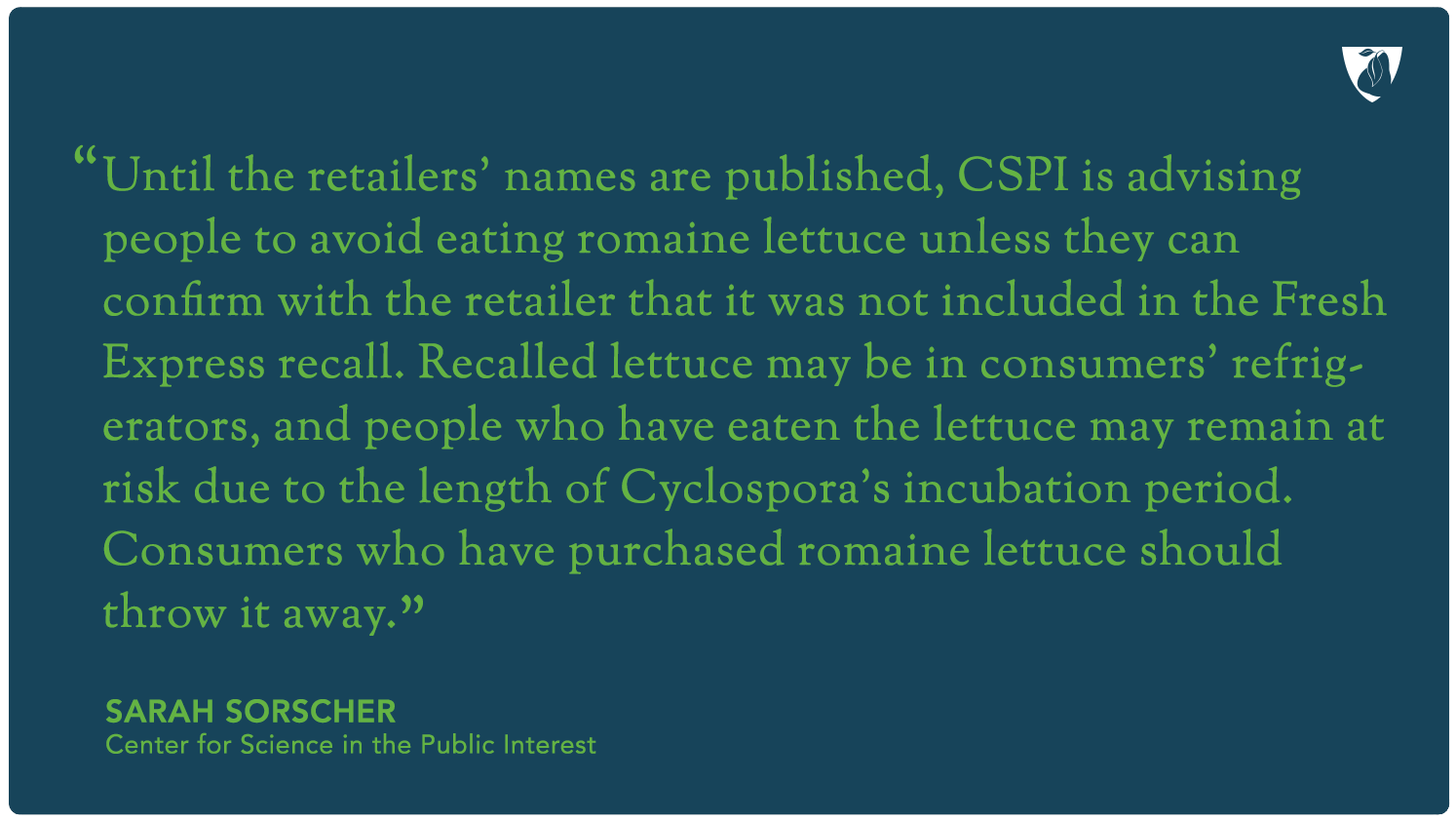