The first DASH (Dietary Approaches to Stop Hypertension) study was published in 1997.

And it’s still the bedrock of today’s advice from the American Heart Association, American College of Cardiology, American Cancer Society, and others: Eat a diet rich in fruits and vegetables, include low-fat dairy, poultry, fish, beans, whole grains, oils, and nuts, and limit sweets, sugar-sweetened beverages, and red meats.

How did DASH happen?

In contrast, roughly one out of two U.S. adults now have high blood pressure, or hypertension. It’s a major risk factor for strokes and heart attacks.

“So scientists at NHLBI—the National Heart, Lung, and Blood Institute—decided that we needed a definitive clinical trial to see whether the DASH dietary pattern would lower blood pressure.”

The researchers prepared all the food for the participants. (That’s part of what made the study “well controlled.”)

“After eight weeks, the fruits and vegetables had lowered blood pressure significantly” compared to the typical American diet, says Sacks, “but only about half as much as the DASH diet lowered pressure.”

“Even now, we don’t fully understand how those changes—switching from high-fat to low-fat dairy, from beef and pork to fish and chicken, and from butter to oils—lowered blood pressure more than fruits and vegetables alone,” says Sacks.

Since all three diets in the DASH study had the same amount of sodium, “the NHLBI scientists thought we should see what happens if you reduce sodium in both the DASH diet and the typical American diet,” Sacks explains.

“The blood pressure reduction from cutting salt was substantial, especially in older people,” says Sacks. And if you add the drop from switching to a DASH diet, the difference was huge.

“The DASH diet alone can lower blood pressure as much as taking a blood-pressure-lowering drug,” says Sacks. “If you also cut salt, it can be superior to drug treatment.” 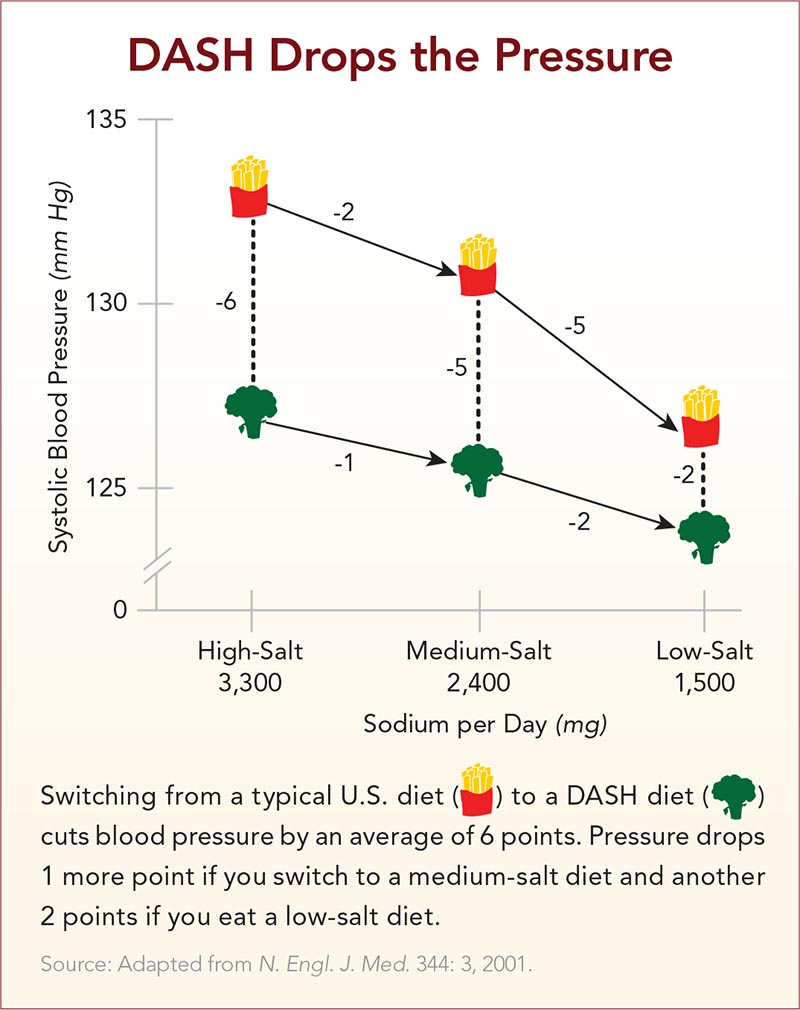 But the researchers had yet another question.

“We wondered what would happen if you took away some of the carbs in DASH and replaced them with unsaturated fats or protein,” says Sacks. (More than half of the extra protein would come from plant foods like beans and nuts.)

That led to a third DASH study.

“Replacing some of the carbohydrate with protein or unsaturated fat lowered blood pressure, cholesterol, and triglycerides more than the original DASH diet,” says Sacks.

“But bear in mind that it wasn’t just a diet in which everything was slathered with cheese or oil,” notes Sacks. “It was the same healthy DASH dietary pattern.”

Recipes designed for a DASH diet

Starting at $10
See the healthiest diet