Research shows that regular physical activity is essential to slowing arthritis progression and maintaining mobility as you age.

“Physicians used to tell people with osteoarthritis to sit down and take it easy,” says Stephen Messier, director of the J.B. Snow Biomechanics Laboratory at Wake Forest University. “We’ve moved past that.”

Messier’s team has shown that regular exercise—by itself or combined with weight loss—improves pain and function in people with osteoarthritis of the knee.

In one study, 365 adults were assigned to either a control group or one of two exercise groups—walking or strength training—that exercised for an hour three times a week. After 18 months, people in both exercise groups reported less knee pain and demonstrated better function than people in the control group.

Since most of the participants had obesity, Messier wondered if losing weight would have helped them even more. So his team assigned roughly 400 overweight or obese adults with knee osteoarthritis to do 30 minutes of walking plus 20 minutes of strength training three times a week, to cut 800 to 1,000 calories a day, or to do both.

After 18 months, the diet-and-exercise group had lost an average of 23 pounds. And they had better function and less pain than either the diet-only or exercise-only group.

“Pain was reduced by almost 50 percent in the diet-​and-exercise group,” says Messier. “That’s hard to get any other way. You can expect about a 30 percent reduction in pain in about half the people who use non-steroidal anti-inflammatory drugs like Advil or Aleve.”

If weight-bearing exercise is too painful, try taking your exercise to the pool. “The clinical outcomes from aquatic exercise are pretty close to ours,” says Messier.

Messier is now testing high-intensity strength training. “Thighs with a lot of fat are a wobbling mass, which puts more stress on the knee,” he explains. “We want to change the composition of the thigh.”

And the training goes beyond strengthening the quadriceps muscle. “Everyone does the quads, and it works,” says Messier. “But we want to also do the hip, the thigh, and the calf.”

Tai Chi for the knee?

In the largest study, researchers assigned roughly 170 people with knee arthritis to do either Tai Chi or physical therapy. The Tai Chi group attended two hour-long sessions a week, and was told to practice for 20 minutes a day at home. 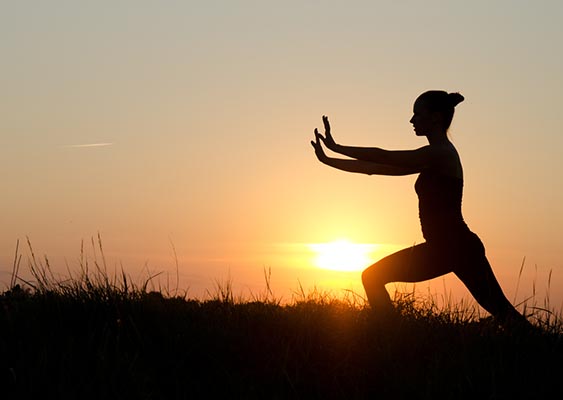 After three months, they had the same improvement in pain and physical function as those who worked with a physical therapist.

Bonus: Tai Chi seemed to help lift depression and, in a smaller study, reduced the fear of falling, which can give people the confidence to do other exercise.

Can yoga also help? A handful of small, short-term studies suggests that it may have some benefit. Stay tuned.

“Just keep moving. Lack of mobility as you age is detrimental to your health, your independence, and your quality of life.”