A new survey of global breakfast cereal brands by the U.K.-based World Action on Salt and Health has revealed wide differences in the levels of sodium and sugar found in the same cereals around the world.  For instance, Kellogg’s Honey Smacks had 55.6 grams (g) of sugar per 100 g in the U.S., but the same product contained only 43 g in several other countries.  And Kellogg’s All Bran Flakes had 724 milligrams (mg) of sodium per 100 g compared to 280 mg per 100 g in certain other countries.

The Center for Science in the Public Interest collected the data for the American cereals in the WASH survey and found that the same products sold elsewhere sometimes contained less sugar or sodium.  (In comparing U.S. sodium levels to those in other countries, CSPI converted WASH’s reported grams of salt to milligrams of sodium.)

The survey looked at 19 products by Kellogg’s and Nestlé/General Mills from 29 countries for comparison and found that sugar content ranged from 8 g to 57 g per 100 g, while the sodium content ranged from 32 mg to 772 mg per 100 g.  The World Health Organization recommends that adults should restrict their consumption of sodium to 2,000 mg a day and added sugars to 50 g (12 teaspoons) a day.

Each of the cereals sold in the United States that was included in the survey was labeled either as “high” or “medium” in sugar and sodium content according to the United Kingdom’s traffic-light labeling system.

All of the American cereals were higher in sodium than the same cereals in certain other countries, a finding that is particularly relevant to the current efforts by the U.S. Food and Drug Administration to implement voluntary guidance for the food industry to reduce sodium in processed and restaurant foods in this country.

Here are the U.S. cereals with their sugar and sodium content and compared with cereals in certain other countries: 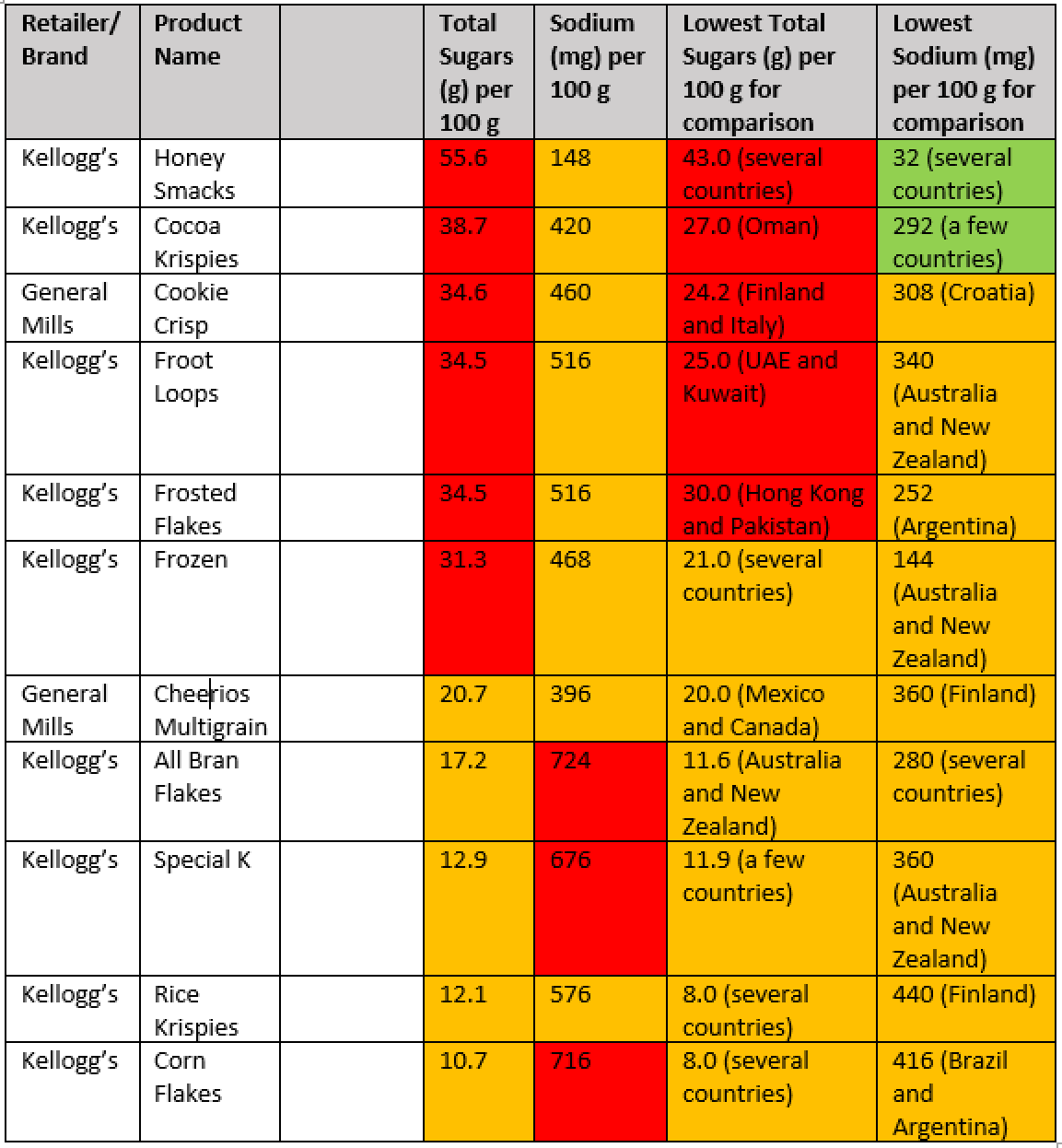 “This survey makes clear the need for action by the FDA,” said Jim O’Hara, director of Health Promotion Policy for CSPI.  “The FDA’s short-term sodium targets should be finalized before the end of the Obama Administration so that the industry has clear goals and so that tens of thousands of Americans have their risk of heart attack and stroke reduced.  The FDA should start a similar program to reduce sugar consumption.”

For further information on the WASH global survey see www.worldactiononsalt.com