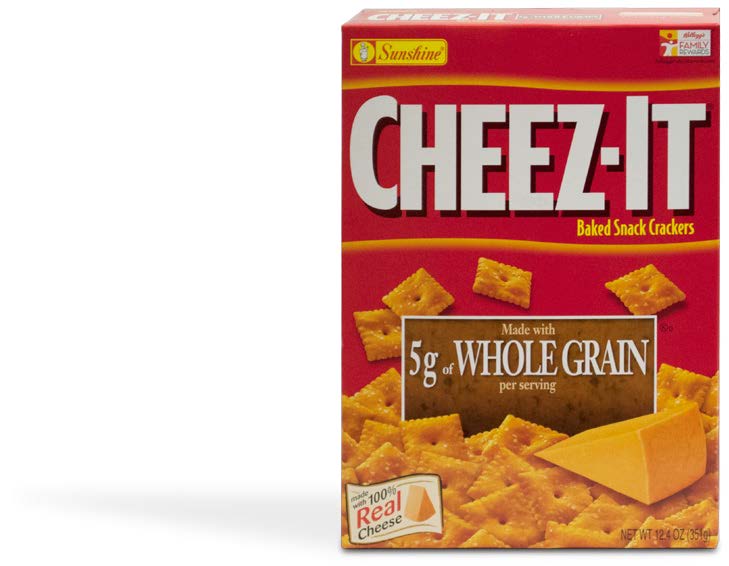 The Kellogg Company is facing a lawsuit over the labeling of its Cheez-It Whole Grain crackers, which are primarily made of white flour and not the whole grain touted on the box.

According to a complaint filed today in United States District Court for the Eastern District of New York, the “whole grain” crackers are nearly identical nutritionally to the Original version of Cheez-Its, providing a negligible one gram of fiber. The nonprofit Center for Science in the Public Interest is co-counsel in the suit, filed on behalf of consumers in New York and California.

“Consumers are seeking out whole grain foods, and expect that when they see the words ‘whole grain’ on the package that whole grain is the main ingredient,” said CSPI litigation director Maia Kats. “Kellogg’s Whole Grain Cheez-Its have more white flour than whole grain. It’s effectively a junk food, and Kellogg is taking financial advantage of consumers who are trying to make better decisions for their health.”

A 30-gram serving of Whole Grain Cheez-Its contains only one gram of dietary fiber, while the Original Cheez-It has “less than one gram.” The words “WHOLE GRAIN,” or in some cases, “MADE WITH WHOLE GRAIN” appear prominently on five of the six package panels, including the front of the box, known as the principal display panel. In small print on the front of the box, Kellogg states that the product has just 5 grams of whole grain per serving; some boxes state that the product has 8 grams. The Dietary Guidelines for Americans recommends that at least half of the grains people eat be whole grains. Less than half the grains in both versions of Whole Grain Cheez-Its are whole.

The plaintiffs are primarily seeking injunctive relief—an order from the court preventing Kellogg from continuing to engage in deceptive marketing of Cheez-Its. Besides CSPI, the plaintiffs are represented by Michael R. Reese and George V. Granade of the New York City-based law firm Reese LLP and Steven A. Skalet and Craig L. Briskin of the Washington, DC-based Mehri & Skalet, PLLC.

Earlier this year, CSPI sued General Mills over its marketing of Cheerios Protein. That cereal has only negligibly more protein than original Cheerios but has 17 times as much sugar. That case is pending. Last month CSPI finalized a settlement with Coca-Cola over its labeling and marketing of Vitaminwater. That agreement prohibits Coca-Cola from making a number of specific health claims on Vitaminwater labels and adds the words “with sweeteners” on two places on the label. In 2007, CSPI reached a pre-court settlement with Kellogg by which the company agreed to the first enforceable nutrition standards for foods advertised to children.