The long-awaited updates from the United States Department of Agriculture (USDA) to its genetically engineered (GE) organism regulation are finally here. Issued on May 18th, this final rule completed a more than ten-year process started back in 2008 to revise regulations promulgated in 1987. This article discusses these new regulations and some of their potential impacts. Overall, the new rule ignores the calls from industry, consumer organizations, and environmental groups for continued oversight and transparency. The new regulations, including an option for developers to self-determine whether their products are regulated, could lead to adverse environmental and/or agricultural impacts, potential food safety risks, trade disruptions, and lack of consumer acceptance of new food technologies.

USDA Oversight from 1987 to the Present

To understand USDA’s new regulation of GE plants, it is important to understand how USDA has regulated GE plants since 1987. USDA regulates the import, interstate movement, and environmental release of GE plants under its legal authority to manage “plant pests” under the Plant Protection Act. A “plant pest” is any organism “that can directly or indirectly injure, cause damage to, or cause disease in any plants or plant product.” Under USDA’s regulations, a GE plant has been considered a “potential” plant pest if any of its newly introduced DNA came from an organism on USDA’s list of plant pests, or if the method of introducing DNA into the plant’s genome involved an organism on USDA’s list of plant pests. For example, if a GE plant was developed using the plant pest Agrobacterium to introduce new DNA, as many are, it was regulated. However, if the same DNA were introduced using the gene-gun method of transformation, USDA would not regulate the GE plant.

Under the regulations (found at 7 CFR part 340), developers were required to submit their GE plant products to one of three oversight processes before environmental release.

For each regulatory process, USDA is ensuring that the GE plant is not going to become a plant pest and cause harm to agricultural interests.

Up until 2011, every GE plant tested outdoors either submitted a notification or received a permit, and all commercialized plants satisfactorily completed the petition process. Then, in 2011, USDA established a process whereby GE seed developers could inquire to USDA about whether the GE plants they were developing required regulation, or whether they were exempt because they did not involve any plant pest components. USDA responded to these “Am I regulated?” inquiries stating whether the GE plant was not regulated and could be planted without oversight. By the end of 2019, USDA determined that more than 85 plants did not fall within its regulatory authority and are exempt from oversight. So, over the last eight years, we have seen a decrease in how many GE plants USDA regulates.[1]

The new rule (called the Sustainable, Ecological, Consistent, Uniform, Responsible, Efficient, (SECURE) Rule), which will be implemented over the next 18 months, applies to organisms produced through “genetic engineering,” which is defined to include “techniques that use recombinant, synthesized, or amplified nucleic acids to modify or create a genome.” This broad definition includes classical genetic engineering, which add one or more new genes to organism (what consumers consider GMOs), and newer gene editing techniques such as CRISPR, which can make edits within an organism’s existing genome.

While the definition captures all GE plants, USDA exempts many of them from any oversight. First, it exempts products with a single sequence deletion, substitution, or addition (if the addition is from the plant's gene pool). Second, it exempts any GE plant that has the same “plant-trait-mechanism of action” as any GE plant previous regulated by USDA. This means that if USDA previously regulated a GE plant, such as a glyphosate-tolerant corn, a new GE glyphosate-tolerant corn is exempt if it employs the same mechanism of action (meaning it biologically operates the same way to provide tolerance). Developers can self-determine whether they qualify for these exemptions; confirmation of their self-determination from USDA is not required and the agency need not be informed. 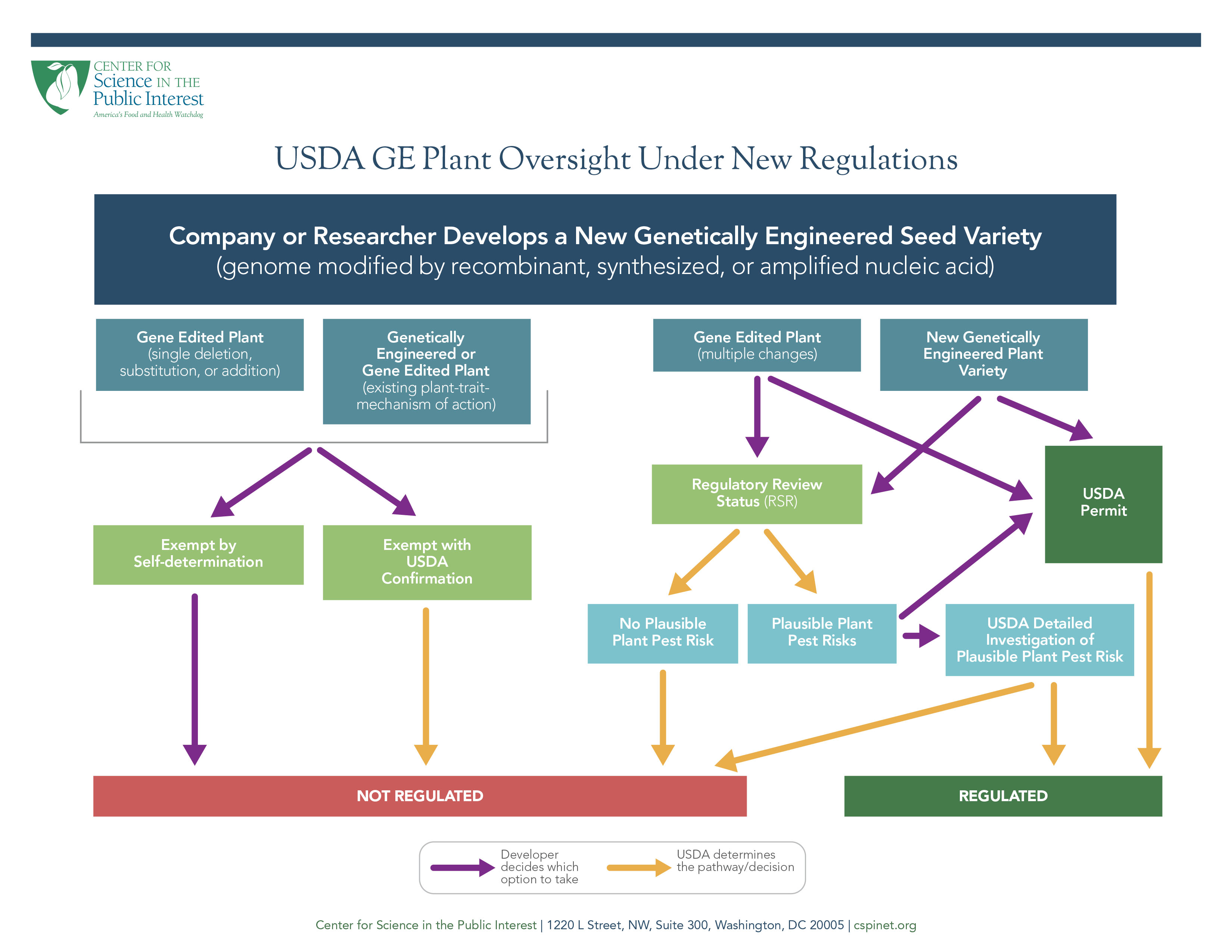 If a GE plant is not exempt, the developer can either: (1) apply for a permit if the GE plant has potential plant pest risks; or (2) seek a Regulatory Status Review (RSR). The RSR starts with an initial 180-day process where USDA determines if the GE plant has any plausible plant pest risks. That initial RSR step is a closer look at the GE plant than the current “Am I regulated” process, but less detailed than the process used for “petitions for non-regulated status.” USDA stated that the initial review does not require any plant-specific “laboratory or field-test data.” If USDA decides there are no plausible risks, USDA sends a letter to the developer stating the plant is not regulated and publishes the letter on its website. If USDA cannot conclude there are no plausible risks, then the developer can either: (1) request that USDA conduct the second part of the RSR, which is detailed evaluation of potential plant pest risks (which can take up to 15 months), or (2) apply for a permit. The more lengthy and detailed RSR evaluation by USDA is comparable to the current “petition for non-regulated status” process and ends in USDA determining either than the GE plant is not regulated or that it needs a permit. If a developer receives a permit from USDA, any outdoor planting (e.g. a field trial or a commercial planting) is subject to restrictions to prevent inadvertent release into the environment and any adverse plant pest impacts. These are the same restrictions that virtually all GE plants were subject to prior to 2012 under the notification and permitting processes. Only GE plants that receive permits have any continued oversight by USDA.

The most significant problem with USDA’s rule is the exemptions. First, they are not supported by scientific evidence showing that these categories of GE plants do not pose risks. Instead, USDA states that since a single deletion, substitution, or addition produces a plant that could be achieved by conventional breeding methods, and because conventionally bred plants have not raised plant pest risks, gene edited plants that are the same as products that could be achieved through conventional breeding will not pose plant pest risks. The problem with this argument is that a science-based regulatory system should base its oversight on whether the plant possesses traits that make it a potential plant risks, not the plant’s method of production. One of USDA’s reasons for revising its rules was to focus on the properties of a product, not how it was developed, yet that is the very approach these exemptions enshrine. While many, if not most, plants with a single deletion may not present any plant pest risks, if one does, shouldn’t USDA regulate it?

If USDA does not know which GE plants are exempt, how can it confirm that determination is correct?

The second problem is that the developer self-determines if its product qualifies for an exemption. This sets up an inherent conflict of interest because developers have financial incentives to determine themselves exempt. While some developers will diligently determine the regulatory status of their GE plant, others may not. In addition, when a developer self-determines its product is exempt, neither USDA nor the public knows that the GE plant is being released into the environment and entering the food supply because there is no requirement to notify the agency of one’s self-determination. If USDA does not know which GE plants are exempt, how can it confirm that determination is correct?

Is there anything Positive in the Rule?

Fortunately, the rule is not all bad. One positive is USDA’s decision to limit the exemptions to single edits. USDA’s reasoning for this decision was that while a single edit mimics a product that can be produced through conventional breeding methods, the same is not true for products with multiple edits. Therefore, if a developer makes two or more edits, the developer must apply for a permit or ask for an RSR. The first gene edited commercial product in the US—Calyxt’s high oleic soybean, which USDA exempted from regulation under the “Am I regulated?” process—would not be exempt under the new rules because it has two edited genes. If most gene edited products end up having two or more edits, the exemptions may have limited applicability.

USDA states that one goal of its revisions is to provide “regulatory relief,” and the final rule clearly achieves that. Many GE plants that historically required containment for field trials through either the notification or permitting process will no longer be subject to any substantive regulation. They either will be exempt or deemed to have no plausible plant pest risks through the initial step of the RSR process. What this means in practice is that GE plant developers (both private developers and academic scientists) can conduct field trials without any confinement conditions that ensure the GE plants do not persist in the environment after the trial is completed. USDA stated in its proposed rule that it hopes developers voluntarily continue confinement measures, but that may or may not happen. GE plants have escaped from field trials with USDA oversight in the past and the likelihood of that happening will only increase without USDA oversight. That could mean new proteins inadvertently entering our food supply before they are deemed safe for human consumption. Experimental GE plants persisting in the environment after a field trial is concluded could also harm non-target organisms. Finally, if an unregulated GE plant escapes from a field trial and enters the export market, it could result in rejection of the US commodity because the experimental plant has not been approved in the importing country.

USDA states that one goal of its revisions is to provide “regulatory relief,” and the final rule clearly achieves that.

The final rule also fails to provide needed transparency on GE plants that will be commercialized. USDA, food industry stakeholders, and consumers will be at the mercy of developers to make information public about products they are developing that they have deemed exempt. How will the food industry know which foods contain GE plants to ensure they are complying with export market legal requirements? How will food manufacturers and retailers answer questions from consumers asking whether their products contain ingredients from genetically engineered or gene edited plants? If consumers are unable to access information about which GE plants are commercialized, will they become skeptical about those products and their safety? The lack of transparency inherent in the rule will result in international trade problems and misinformation to consumers.

GE plants have and will continue to provide benefits to farmers and the environment and could be beneficial to consumers in the future. However, the USDA rule could impact acceptance of those products by the food industry and leave consumers wondering what developers are hiding.

[1] While USDA is the primary agency regulating GE plants, FDA and EPA regulate subsets of GE plants. If a GE plant is used for food or feed, FDA regulates it under a voluntary consultation process set up under the Federal Food, Drug and Cosmetic Act. If a GE plant produces a pesticide, EPA regulates it as a plant-incorporated protectant under the Federal Insecticide, Fungicide, and Rodenticide Act.