While much of the federal government’s recent activity has surrounded COVID-19, some agencies are continuing their work in other areas, including agricultural biotechnology. In this blog, I invite you to take a break from the coronavirus news cycle as I summarize three developments you may have missed that have occurred in agricultural biotechnology in the United States since the start of 2020.

On March 30th, the Environmental Protection Agency (EPA) approved the herbicide Isoxaflutole for use on soybeans that were genetically engineered to be resistant to that herbicide (the soybean variety was approved by the US Department of Agriculture (USDA) years earlier). EPA concluded that under certain conditions, the herbicide could be used in an “environmentally protective manner in certain parts of the country.” The EPA registration classifies Isoxaflutole as a restricted-use pesticide, which means it can only be applied by applicators who receive special training, and it cannot be applied aerially or through irrigation systems. Geographically, its use on soybeans is limited to specific counties in 25 states (because those areas do not have endangered species that would have required EPA to conduct a detailed assessment to comply with the Endangered Species Act). The registration is limited to five years, which will allow EPA to review compliance with the use restrictions and monitor development of any resistant weeds. EPA also requires the registrant (Bayer CropScience) to establish a weed resistance management plan, including development and implementation of an education program encouraging farmers using the herbicide to take steps to prevent resistant weed development.

While safe and effective herbicides are necessary to produce our food, this registration raises some obvious compliance issues. First, Isoxaflutole was not approved for use in Illinois and Iowa, two of the largest growers of soybeans. Isoxaflutole is also approved for use as a pre-emergence herbicide on corn fields in 8 additional states where it is not approved for use on the herbicide-tolerant GE soybeans (and its use has been banned by state regulators in some counties in some Minnesota, Wisconsin, and Michigan to prevent groundwater contamination). How will EPA ensure that this herbicide is only used on soybeans in geographically approved regions of the country? The situation seems ripe for illegal use by some farmers.

Second, while I applaud EPA’s inclusion on the label of actions to be carried out by the developer and farmers to prevent resistant weed development, those actions are not enough. The Isoxaflutole label only states that “Appropriate resistance management strategies should be followed” and that “to delay resistance, take one or more of the following steps.” Those statements suggest, but do not legally obligate, farmers to carry out activities such as pesticide rotations from season to season or adoption of integrated weed management programs. Farmers could comply just by switching to a different herbicide if resistant weeds develop or by reporting any suspected resistance to the developer (two of the actions suggested by EPA on the pesticide label under resistance management)—but even those are not required. Given the history of overuse of glyphosate by farmers growing GE corn and soybeans, which has resulted in millions of acres of resistant weeds, EPA registration should have explicitly required resistant weed prevention by farmers.

On March 4th, the Food and Drug Administration (FDA) launched its “Feed Your Mind” website, which is the first public-facing product from the $7.5 million that Congress appropriated starting in 2017 for an Agricultural Biotechnology Education and Outreach Initiative. According to FDA, the initiative’s goal is to “share science-based information that educates, informs, and broadens understanding about agricultural biotechnology for consumers.” Congress (and the special interests that lobbied for the appropriation) clearly intended to use the authoritative voice of FDA to increase consumer’s understanding of agricultural biotechnology and correct misconceptions and misinformation.

The initiative’s website includes fact sheets, infographics, and videos. It will be followed by additional materials for middle school classrooms, resources for health professionals, and consumer materials later in 2020 and in 2021.

In reviewing “Feed Your Mind,” one finds information that is scientifically accurate (with reliable references) and relatively easy for a non-scientist to understand. If you know nothing about GMOs and read the website’s contents, you will clearly be better informed about what GMOs are, although not necessarily about why GMOs have been so controversial. The question that remains is how this website (which is not easy to find from FDA’s homepage, nor does it quickly appear when entering basic questions about GMOs into an internet search engine) will educate a significant segment of American consumers. Will FDA promote the website and its materials through an ad campaign? Will they send emails or postcards to Americans telling them to visit the website? I cannot imagine that the average American consumer visits FDA’s website with any great frequency. One can reasonably assume that the number of consumers who will search for the “Feed Your Mind” website, even if they know it exists, will be extremely small. So far, FDA has only announced the website to its list of stakeholders. Much more outreach will be needed if the information they have generated is to have the impact Congress intended 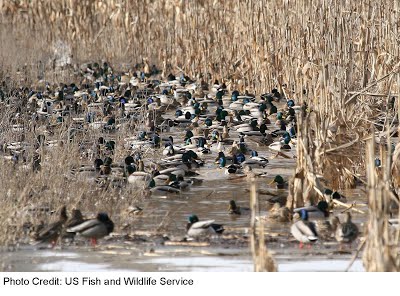 On March 19th, the Department of Interior’s Fish and Wildlife Service (FWS) announced that it had completed a draft Programmatic Environmental Assessment (PEA) to assess the use of GE crops for natural resource management in the National Wildlife Refuge System. The public comment period on the PEA ended April 19th.

Let’s explain how we got here. Currently, approximately 28,000 acres of refuge land in the Southeast is contracted out by FWS to farmers who grow primarily corn, soybeans and rice. In those contracts, farmers agree not to harvest 25% of their crop so it can be left as food consumed by waterfowl and other animals that the refuges support. Agricultural fields also maintain open habitat to support wildlife and control invasive species. Contract farmers utilized GE crops until 2012, when a lawsuit stopped the practice pending a PEA in compliance with the National Environmental Policy Act (NEPA). This PEA is the result of that process.

The PEA covers ten states and two territories in the Southeastern United States and recommends a policy that would allow the growing of GE crops on NWR land. The PEA compares the period before 2012 (with GE crops) and after 2012 (without them). They find that the pesticide use (pounds of active ingredient) increased 68% after farmers stopped using GE crops in 2012 and the number of active ingredients increased 76%. Other facts supporting the PEA’s conclusion that the growing of GE crops should be allowed include findings that NWR staffs’ workload was less when farmers used GE crops and farmers had increased yields. Finally, they found using GE crops was consistent with the FWS’s Integrated Pest Management Policies.

In the United States, farmers have grown GE crops for more than twenty years, reaping their benefits such as reduced insecticide use on corn and cotton crops while managing their risks (although not always well). If those same GE crops can be beneficial to farmers growing crops on NWR lands without demonstrable risk, as the PEA appears to show, then it seems like they should be permitted to plant them.

After reviewing the comments received, FWS will issue a final PEA. But the process does not end there. The PEA is necessary, but not sufficient for permitting the growing of GE crops in NWRs. Next, individual refuges in the Southeastern region can conduct their own site-specific analysis to determine whether to authorize their farmers to use a GE crop.

Now that you’re caught up on the latest in agricultural biotechnology, stay tuned for additional developments we expect in the coming weeks. These include USDA’s revisions to 7 C.F.R. Part 340 addressing its oversight of GE organisms that might be plant pests, and EPA’s proposal on how its regulation of plant-incorporated protectants will apply to genome-edited crops. Check back with the Biotech Blog for coverage of these and more!