The Center for Science in the Public Interest has sued the German drug company Bayer for falsely claiming that the selenium in Men’s One A Day multivitamins might reduce the risk of prostate cancer. The lawsuit is filed in the Superior Court of California in San Francisco.

CSPI first contacted Bayer in June to demand that the drug maker alter its marketing of Men's One A Day because the largest prostate cancer prevention trial ever conducted found eight months earlier that selenium supplementation does not prevent prostate cancer. More alarmingly, that study and another found that selenium supplements may increase the risk of diabetes.

A day after CSPI contacted Bayer, the FDA issued a letter containing qualified health claim language for use on labels that said, in part, that it was "highly unlikely that selenium supplements reduce the risk of prostate cancer." That forced Bayer to alter much of its marketing, but it pointedly refused to recall existing packages bearing the false claims. The company also refused to remove all false prostate claims from some marketing for Men's One A Day, and failed to put in writing that it will not make those claims in the future. 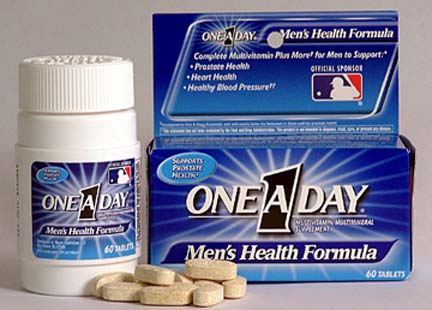 "Given Bayer's long history of wrongdoing in other cases, CSPI is acting to ensure that Bayer is permanently stopped from deceiving consumers about selenium," said CSPI litigation director Stephen Gardner.

The largest prostate cancer prevention trial ever conducted found that the mineral selenium was no more effective in reducing prostate cancer risk than a placebo. That trial, the Selenium and Vitamin E Cancer Prevention Trial, known as SELECT, was halted early when it became clear that the men were not benefiting from selenium and may have developed more cases of diabetes than men in the control group. Another study of selenium and prostate cancer found an alarming three-fold increased risk of diabetes among men taking selenium.

Writing about the SELECT trial in the Journal of the American Medical Association, Dr. Peter Gann of the University of Illinois at Chicago cautioned that "physicians should not recommend selenium or vitamin E—or any other antioxidant supplements—to their patients for preventing prostate cancer." Hopes that selenium might be beneficial to the prostate were further dashed when a 2009 study of men with prostate cancer found more aggressive cases of the disease in men with high selenium blood levels and a common genetic trait shared by three out of four men.

"Bayer has been giving American men false hope about the selenium in One A Day multivitamins," said CSPI executive director Michael F. Jacobson. "Bayer continued to run deceptive ads even after SELECT found that selenium supplements weren’t helping and might even be hurting."

In a recent letter to CSPI, Bayer threatened to sue CSPI for libel for calling attention to Bayer’s selenium claims. Much of Bayer's courtroom experience, however, comes as a criminal or civil defendant.

In 2003, Bayer pleaded guilty to a criminal charge and paid $257 million in fines and penalties after a whistleblower exposed a scheme by the company to overcharge for the antibiotic Cipro. Media accounts at the time described it as the biggest recovery for Medicaid fraud.

In 2004, Bayer pleaded guilty to a criminal charge and paid a $66 million fine after a Justice Department investigation into Bayer’s role in a price-fixing conspiracy involving a chemical used to make rubber products. Two Bayer executives separately pleaded guilty and were sentenced to prison for their role in the scandal.

In 2007, Bayer paid $8 million to resolve allegations by state attorneys general that the company failed to warn physicians and consumers about safety issues surrounding its cholesterol-lowering drug Baycol, which is no longer on the market.

Bayer has even gotten into hot water with the federal government in the past over its One A Day marketing. In 2007, it paid a $3.2 million civil fine as part of a consent decree reached with the Federal Trade Commission and the Department of Justice. The case centered on weight-loss claims that the FTC said violated an earlier order requiring that all health claims for One A Day be supported by competent and reliable scientific evidence. CSPI says that Bayer's prostate claims for Men’s One A Day violate the consent decree, which could compound the company's legal problems.

And this year, Bayer was required to run a $20-million corrective advertising campaign about its birth control pill Yaz, and to submit its ads for FDA approval, as part of a legal settlement secured by a number of state attorneys general and the FDA.

"Bayer's threat to sue CSPI is clearly designed to have a chilling effect on free speech and to intimidate us into silence," Jacobson said. "I'm confident, however, that the FTC, the FDA, and the courts will all take careful note of the facts of this case, as well as Bayer's long history of flouting the law. It takes a lot of chutzpah for a company with such a long record of corporate malfeasance to level libel charges against a nonprofit organization."

CSPI is suing on behalf of itself and its members, and is represented by its in-house litigators Stephen Gardner and Katherine Campbell, alongside Harry Shulman of The Mills Law Firm of San Rafael, Calif., and Washington, D.C.-based lawyers Steven N. Berk and Chris Nidel.