Got food that’s slimy or smelly?

“That’s due to spoilage bacteria,” explains Maribel Alonso, a technical information specialist at the U.S. Department of Agriculture.

“Those bacteria can grow at refrigerator temperatures, but typically they won’t make you sick.”

What will make you sick?

“You can get really sick from pathogenic bacteria like E. coli O157:H7, Salmonella, and Clostridium perfringens,” says Alonso. “They grow best at room temperature, but they won’t cause your food to smell or taste bad.”

Listeria typically grows on deli meats, smoked fish, and prepared foods. It’s responsible for listeriosis, the hard-to-diagnose infection that can cause miscarriage in pregnant women and symptoms like fever, diarrhea, headache, and stiff neck.

But if you've left food at room temperature for too long, don't assume that reheating it will make it safe.

“Bacteria can double in as little as 20 minutes at temperatures between 40 and 140 degrees—what we call the food safety ‘danger zone,’” says Alonso.

“If you don’t put leftovers away within two hours after cooking, toss them. And if you’re outside and it’s warmer than 90 degrees, food needs to be refrigerated within one hour.”

Doesn’t reheating kill off those pesky bacteria? “Yes,” says Alonso. “But some bacteria, like Staphylococcus aureus and Clostridium perfringens, produce toxins that are heat resistant.”

Don't rely on your nose to detect harmful bacteria. And if you've left out leftovers for too long, toss them. 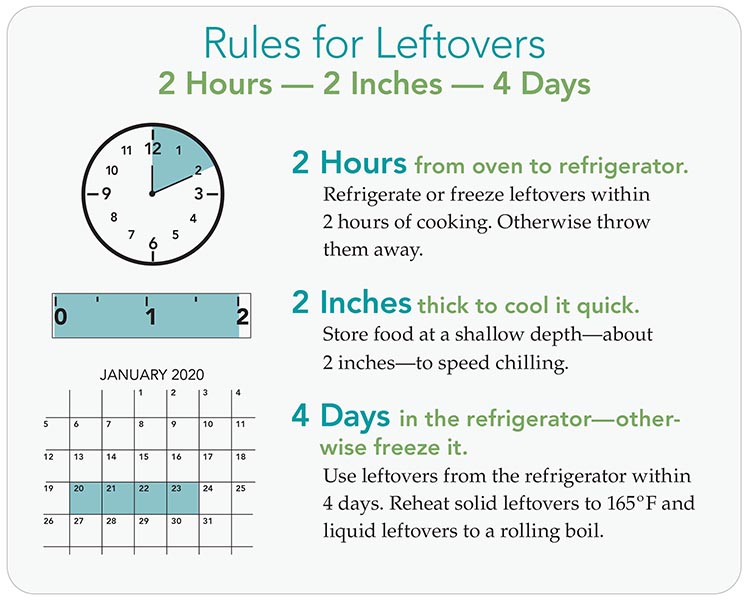