It’s no secret that surprising headlines sell. Sometimes the “wow” factor is enough to propel a still-shaky finding into the spotlight before it’s ready for prime time. Here’s the backstory on some recent studies that made the news.

“Coffee could be the secret to burning fat and fighting obesity,” reported USA Today in June.

The key: brown fat cells, which are “the body’s internal fat fighters.” 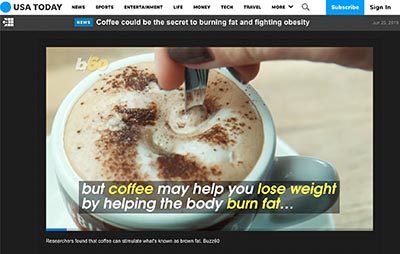 Adults have only a few ounces of brown fat in their bodies, most of it around the neck. So the study looked at brown fat activity—by measuring temperature in the neck—within one hour after drinking a coffee.1

“The consumption of coffee increased the activity of brown fat, researchers found,” said USA Today. “And the control, caffeine dissolved in water, had no impact on brown fat activity.”

Actually, the control was plain water. But more to the point: it’s a big leap from the results of this study—a scant cup of Nescafé (with 65 milligrams of caffeine) raised the temperature in the area above the collarbones of nine people—to “the secret to burning fat and fighting obesity.”

What about weight loss? The study didn’t look.

Of course, you can’t just blame USA Today or other media.

“Could coffee be the secret to fighting obesity?” was the headline of the news release from the University of Nottingham, where the study was done. 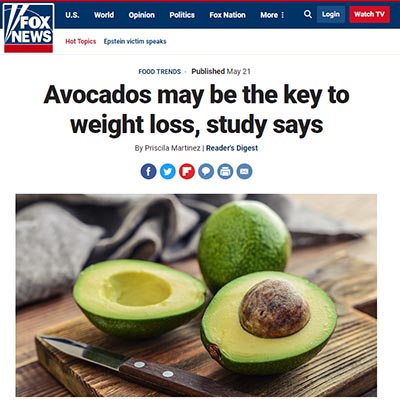 "Before you start feeling guilty about indulging in that guacamole, consider a new study from the Center for Nutrition Research at Illinois Institute of Technology that suggests the fat in avocado can help you suppress hunger and stay more satisfied longer,” reported a Reader’s Digest article on foxnews.com in May.

“For six hours afterward, the volunteers reported how hungry they felt. Everyone reported feeling fuller longer after the meal featuring a whole avocado; even the meal with half an avocado helped satisfy the volunteers longer than the low-fat meal.”

Gosh. That sounds like good news for the avocado industry, which funded the study—a detail that Reader’s Digest left out. Here’s the backstory.

First, the “low-fat meal” was actually a higher-sugar, lower-fiber meal.1 It had 7 more teaspoons of added sugar and a 50 percent larger (white flour) bagel than the avocado meals. And half of the extra sugar came in a sugary drink, which is known to have a weak impact on satiety.

That said, the results were all over the place. People felt more “full” after both the whole avocado and the low-fat meal than after the half-avocado meal.

They felt more “satisfied” after the two avocado meals—but no more so with a whole than a half avocado. They were no more “hungry” after the half avocado than after the low-fat meal, and “desire to eat” was no different. Sheesh.

“This study proves that small, enjoyable changes in your diet like swapping a piece of bread for a yummy half-avocado can lead you to achieve your weight-loss goals,” declared Reader’s Digest. Seriously?

Bottom Line: Avocados are a healthful food, but the key to weight loss? Not quite.

"New study claims a third of adults over 50 have a protein deficiency,” ran the online headline for a segment on ABC’s Good Morning America in February.

“They looked at over 11,000 adults over the age of 50,” explained GMA medical correspondent Jennifer Ashton. 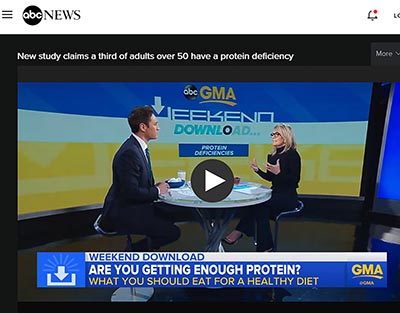 “And they found that 30 to 50 percent of adults over the age of 50 were not getting anywhere close to the daily recommended protein allowance and they were also lacking in other micro-nutrients, so this wasn’t just about protein.”

Whoa. First, if your diet has less than the Recommended Dietary Allowance (RDA) for protein on one day, that doesn’t mean you have a protein deficiency. The RDA has a built-in cushion, so it’s more than what most people need.

Second, studies like this one, which ask people what they ate in a single day, are known to underestimate long-term intakes.

Third, the people who ate too little protein ate too little, period. They ate roughly 30 percent fewer calories than the people who got the RDA for protein.1 And they were more likely to have trouble when standing or sitting for long periods, walking up 10 steps, preparing meals, walking for a quarter mile, and stooping, crouching, or kneeling.

Did lack of protein cause those problems? Or did the problems help explain why those people ate too little food? This type of “cross-sectional” study—which is a snapshot in time—can’t tell.

Here’s what GMA missed: The study was funded by Abbott Nutrition, makers of Ensure. In fact, two of the authors work for Abbott.

Would they have a reason to make older adults think they need more protein...say, from Ensure? Nah. Probably just a coincidence.

Bottom Line: As long as you’re eating enough food, odds are you’re getting enough protein. There’s plenty of protein in a typical diet.

"People with metabolic disorders may benefit from supplements of a common gut bacterium, a small pilot study suggests,” reported the New York Times in July. 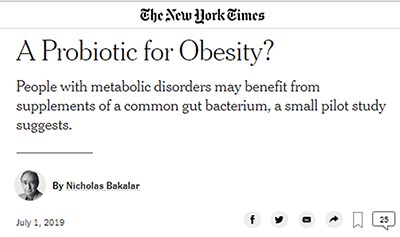 “Compared with the placebo group, those who took pasteurized A. muciniphila had significantly improved insulin sensitivity and total cholesterol, and decreases in several blood markers of inflammation and liver dysfunction,” reported the Times.

“They also had decreased body weight, fat mass and waist circumference, though those differences were not statistically significant. The live bacteria were largely ineffective.”

Wait, what? Dead is better? And the difference in body weight was not significant, but the headline read “A probiotic for obesity?”

What’s more, the people who got the dead bacteria started the study with worse insulin sensitivity, so the three groups weren’t equal at the outset. Even the study’s title called it a “proof-of-concept” and “exploratory.”

Companies are already splashing “probiotics” on their labels with little evidence that they do anything. Headlines like this don’t help.

Oh, and five of the study’s authors have patents on using A. muciniphila to treat obesity. Two have started a company that will sell it.

Bottom Line: A probiotic for obesity? W-a-a-a-y too early.

"According to a new study, women who slept with the television or light on gained 11 pounds or more compared to those who slept in the dark,” reported the NBC Nightly News in June. “Using smart devices as you nod off could increase your risk of obesity by 33 percent.”

Before you get so worried that you can’t sleep, relax. 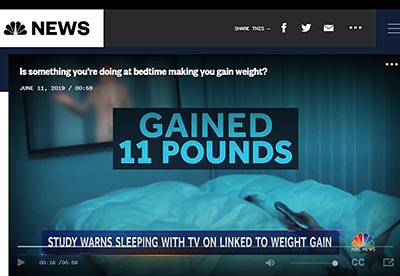 And women who slept with the light or TV on were 33 percent more likely to become obese over the six years. (The study didn’t ask about “smart devices.”)

Those errors aside, does something else about women who sleep with a light or TV on explain why they are more likely to gain weight?

At the outset, those women were heavier and they were more likely to get less sleep, to take longer to fall asleep, to take naps, and to have an irregular sleeping routine.

So did the TV or light cause those problems? Or do poor sleepers watch TV to fall asleep? This study couldn’t say.

But even they acknowledged that they could have missed something.

Sleeping with the light or TV on “might reflect a constellation of measures of socioeconomic disadvantage and unhealthy lifestyle behaviors, all of which could contribute to weight gain and obesity,” they wrote.

“We were unable to disentangle the temporal relationship between exposure to [artificial light at night] and other factors, including unhealthy diet, sedentary lifestyle, stress, and other sleep characteristics.”

Bottom Line: Have trouble sleeping? It wouldn’t hurt to try turning off the TV or smart devices.

"The human body was built to function best with gravity as a grounding force, but astronauts on a mission to Mars could spend between six to nine months on a spacecraft without it,” explained the CNN article in July. 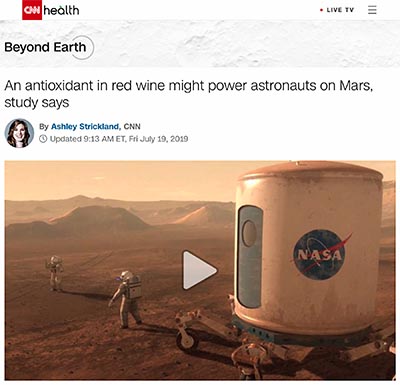 “But a new study published in the Frontiers in Physiology suggests that resveratrol, an antioxidant and compound found in blueberries and the skin of grapes, could be part of the dietary strategy that keeps astronauts strong on Mars.”

Antioxidant? That’s odd... because according to a CNN article from May, “resveratrol, previously labeled an ‘antioxidant,’ is actually an oxidant,” which can “lead to cell damage.”

(Resveratrol can be either one, depending largely on the dose.)

The July article eventually—in the 19th paragraph—got around to mentioning that the two-week study was done in rats, not humans.1 (When suspended from the ceiling of their cage to simulate the impact of Mars’s low gravity, the rats that got resveratrol lost less muscle than those that didn’t get resveratrol.)

But that didn’t stop CNN from making the compound sound like magic.

“Resveratrol, which has been studied regarding Alzheimer’s, has been found to be anti-inflammatory, anti-diabetic and antioxidative.”

Really? In two good human studies, resveratrol didn’t lower inflammation or blood sugar and raised LDL (“bad”) cholesterol.2,3 In another study, it blunted the benefits of exercise on LDL, triglycerides, and blood pressure.4

Bottom Line: Be wary of claims about resveratrol.

"Pizza, candy, chips and other processed, high-fat food can cause permanent damage to sperm, according to a new study from Harvard University,” reported a New York Post article on foxnews.com in June. 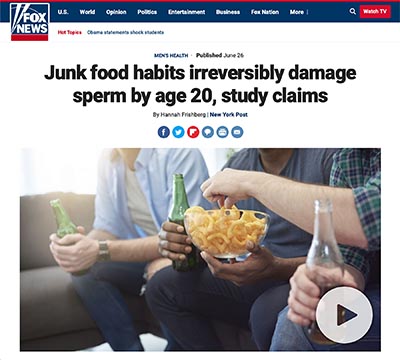 “The researchers studied nearly 3,000 men ages 18 to 20 and found that vegetarians and those with diets rich in fruit, veggies, chicken and fish had higher sperm counts than those on a ‘Western diet’ of processed meats and junk food.”

“The results will be presented this week at the annual European Society for Human Reproduction and Embryology conference in Vienna.”

Red flag: When you hear that “results will be presented,” that’s usually a clue that the full study hasn’t been published. So the details are skimpy.

Sperm counts have dropped by roughly 60 percent since 1973. That’s disturbing. And while this study found a link that might explain the drop, it sure doesn’t show that junk food causes damage to sperm.

“This was a cross-sectional study, which limits our ability to determine causality,” wrote the authors.

And where did the headline’s “irreversibly” come from?

“The researchers believe that processed foods damage the health of sperm-producing cells, or Sertoli cells,” said the article. “And though eating better can improve sperm health over time, Sertoli cells cannot be recovered.”

The researchers believe? The “Western” eaters had lower levels of inhibin-B, which is made by Sertoli cells. That’s troubling, but it’s a long way from “believe” to “irreversibly damage.”

Bottom Line: Eat a healthy diet to lower your risk of heart disease, type 2 diabetes, and some cancers. Infertility? Who knows?

"People who drink up to 25 cups of coffee a day don’t run a greater risk of a heart attack,” said CNBC in June. 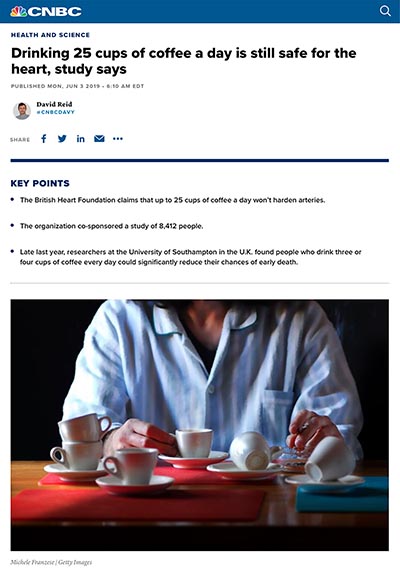 “That’s the remarkable finding from a study of over 8,000 people in the U.K., carried out by the British Heart Foundation (BHF).”1

It’s remarkable, all right...because it’s not true. In fact, the BHF itself said so.

“Newspapers were eager to declare that coffee has no harmful effects on the heart, which didn’t reflect the fact that the study only measured one aspect of cardiovascular health: arterial stiffness,” explained the BHF.

“It didn’t look at other risks such as abnormal heart rhythms or cholesterol levels—which have both been linked to high coffee consumption in the past.”

What’s more, most of the media pounced on the 25-cups-a-day results.

“These misleading claims were based on the fact that the researchers excluded participants who drank more than 25 cups a day,” explained the BHF.

“However only two people in the study actually drank 25 cups of coffee a day.”

The group that drank the most coffee averaged 5 cups a day. (That’s two venti coffees at Starbucks.)

The headlines led a journalist to try to drink 25 cups of coffee, said the BHF, which noted that “It could be dangerous to consume such a high quantity of caffeine. Thankfully he stopped his experiment after seven and a half cups, due to feeling nauseous, jittery and shaky.”

It wasn’t just CNBC. CNN, Fox, and others ran 25-cups headlines. But others resisted the clickbait.

Bottom Line: Caffeine is a drug. Don’t overdo it.