Here’s how to see through a few of the latest. 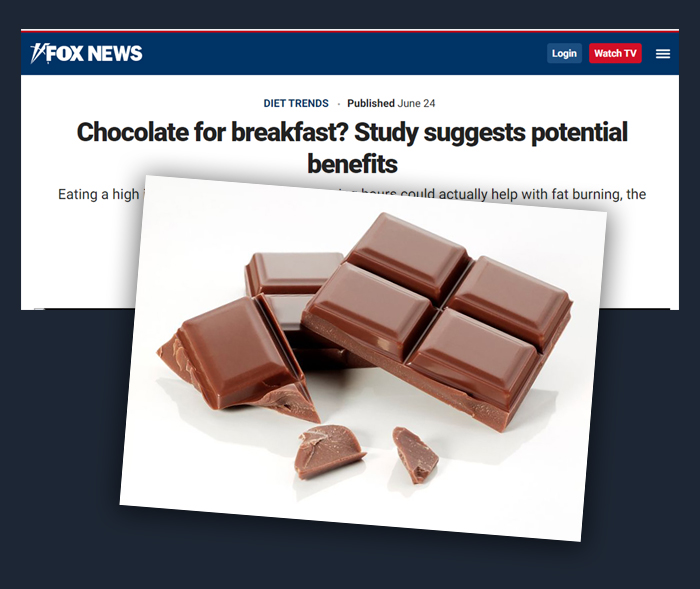 “Eating a high intake of chocolate in the morning hours could actually help with fat burning,” reported Fox News in June. “Starting your day off with chocolate...may not have the dire effects on weight gain you’d suspect.”

Researchers had 19 women consume roughly 3½ oz. of milk chocolate containing 540 calories—more than a quarter of their daily intake—either an hour after waking or an hour before going to bed for two weeks each. They were given no chocolate for two other weeks.

“The researchers reported that morning or nighttime chocolate intake did not lead to weight gain,” said Fox.

But the women reported eating more calories with chocolate than without. So would they have gained weight after three or four weeks?

And did chocolate in the morning “actually help with fat burning”? Only compared to chocolate in the evening (which led to more carbohydrate burning). Women burned no more fat during the weeks they ate chocolate than when they ate none.

The bottom line: Don’t expect chocolate to burn off body fat. A key goal of the study was to see whether people process food differently at different times of the day. For that, stay tuned. 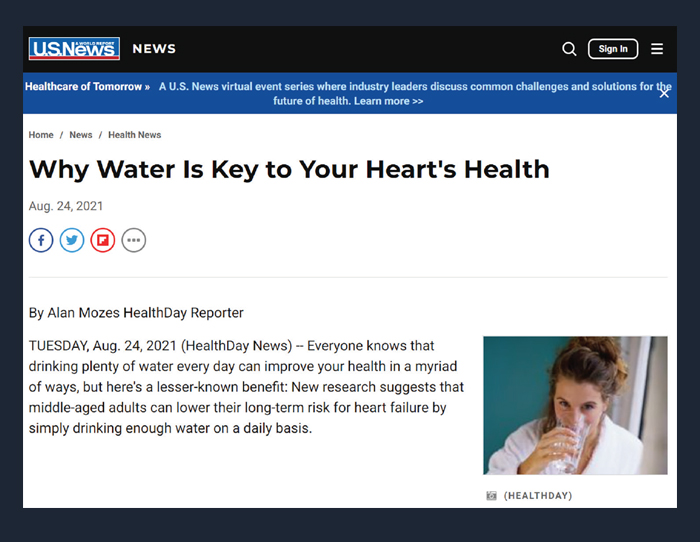 “New research suggests that middle-aged adults can lower their long-term risk for heart failure by simply drinking enough water on a daily basis,” reported a HealthDay article on USNews.com in August. Wow.

“The finding follows an analysis that stacked heart health up against blood salt levels—an indicator for overall fluid intake—among nearly 16,000 middle-aged men and women over a 25-year period,” explained the article.

“The study team then tracked heart failure incidence—along with problems with the heart’s left ventricular pumping capacity—over the ensuing years. The result: those whose blood sodium levels had exceeded 142mmol/L in middle age saw their risk for both heart issues surge when they hit age 70 and older.”

That “trigger point” is in the normal range for blood sodium, noted the article.

Sounds like big news...until you reach the end of the article, where Robert Eckel, past president of the American Heart Association, is quoted.

“These data in the abstract are interesting,” he notes.

Abstract? Yup. The study hasn’t even been published.

The findings are “only hypothesis-generating,” added Eckel, warning that “too much fluid in the wrong patient could be harmful.”

The article then cautions: “Research presented at medical meetings should be viewed as preliminary until published in a peer-reviewed journal.”

Oh. So water may not be key to your heart’s health?

The bottom line: It’s too early to know if drinking more water can prevent heart failure. 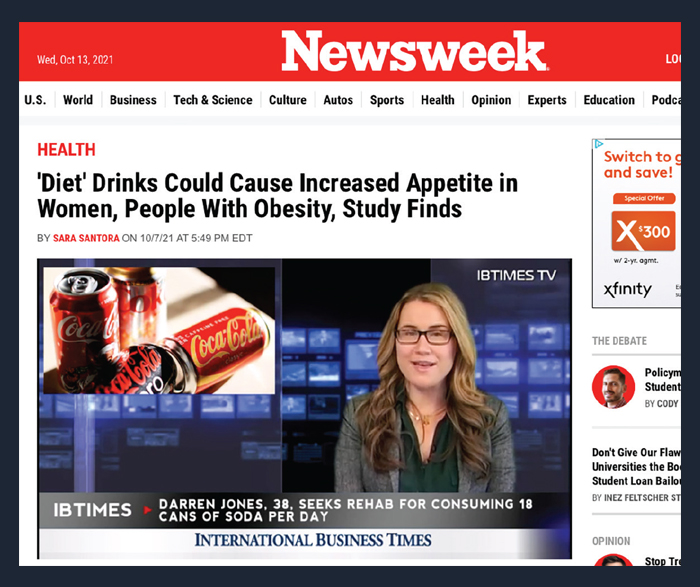 “A new study revealed that some ‘diet’ drinks could cause increased appetites among women and people with obesity,” reported Newsweek.com, citing an NPR story, in October.

The researchers “wanted to know: does a person’s weight or sex impact the efficacy of sucralose? In other words, does sucralose help a person lose weight?” said Newsweek, which went on to describe the study.

“Researchers asked participants to drink 300-mL of water, or a 300-mL drink that either contained sucrose or sucralose.” (Sucrose is table sugar. Sucralose is an artificial sweetener.)

Yes, the women did eat about 85 more calories from the buffet on the day they got the drink sweetened with sucralose rather than sucrose.

But when you include the calories in the drinks, the women consumed about 215 more calories on the day they got the 300-calorie sugary drink rather than the zero-calorie sucralose drink.

That fits with a 2019 study, which found that people with overweight or obesity gained weight when researchers gave them drinks sweetened with sugar but not sucralose for 12 weeks.

And it’s no surprise that women ate more from the buffet on the day they got the sucralose drink. They hadn’t eaten since the night before, so they were probably hungrier two hours after they got the zero-calorie drink rather than the 300-calorie drink.

The bottom line: Avoid sugary drinks. If low-calorie sweeteners help you break the sugar habit, stick with safe sweeteners like stevia or erythritol. Sucralose, aspartame, and acesulfame potassium are poorly tested or cause cancer in animals. 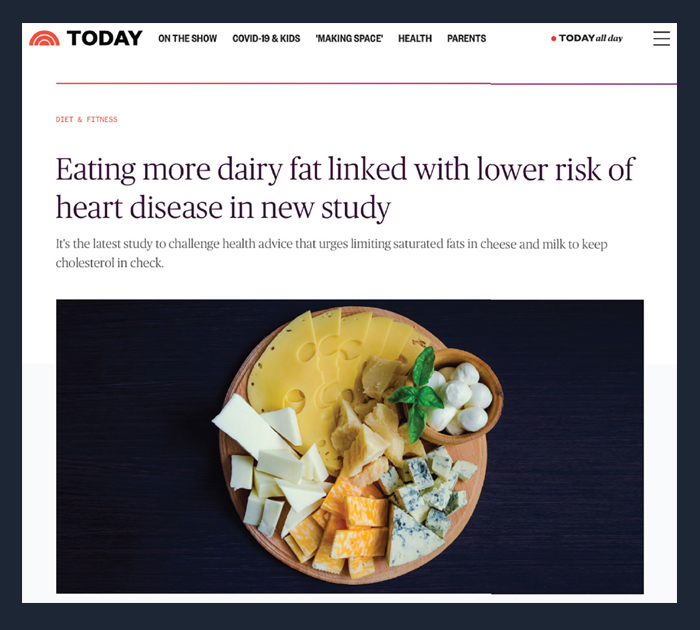 "As cheese lovers keep hearing warnings about eating too much saturated fat, here comes another study that goes against the conventional wisdom about heart health and dairy fat,” reported Today.com in October.

Researchers analyzed blood samples from more than 4,000 adults in Sweden and followed them for 16 years, said Today.

“After adjusting for age, lifestyle, dietary habits and other risk factors, the people with higher levels of dairy fat intake biomarkers had a lower risk of cardiovascular disease compared to those who ate less dairy fat.”

So dairy fat is good? No...which Today eventually gets around to saying.

“A healthy dietary pattern includes dairy in the form of fat-free or low-fat milk, yogurt and cheese, according to Dietary Guidelines for Americans, 2020-2025,” the article noted.

CNN.com’s report on the same study did a better job at explaining why.

“The group with the highest biomarker of dairy intake also had, among other things, a significantly lower BMI, were more physically active, had a lower smoking rate, lower rates of type 2 diabetes and cardiovascular disease, a higher level of education, higher intakes of vegetables, fruit and fish, and lower intake of processed meat...all factors associated with a lower risk of cardiovascular disease,” said the report, quoting Alice H. Lichtenstein, director of the Tufts University Cardiovascular Nutrition Laboratory.

Although the researchers adjusted for those factors, they can’t be ruled out, added Lichtenstein. “Associations cannot establish causality.”

The bottom line: Stick to low-fat dairy, as the American Heart Association and other health authorities recommend. 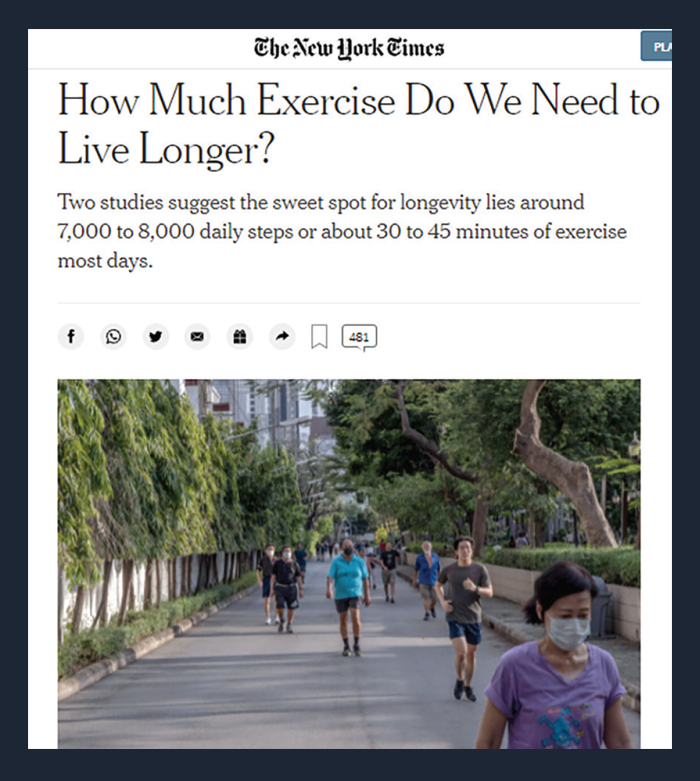 "To increase our chances for a long life, we probably should take at least 7,000 steps a day or play sports such as tennis, cycling, swimming, jogging or badminton for more than 2.5 hours per week, according to two, large-scale new studies of the relationship between physical activity and longevity,” reported the New York Times in September.

“The two studies, which, together, followed more than 10,000 men and women for decades, show that the right types and amounts of physical activity reduce the risk of premature death by as much as 70 percent,” noted the Times.

“But they also suggest that there can be an upper limit to the longevity benefits of being active, and pushing beyond that ceiling is unlikely to add years to our life spans and, in extreme cases, might be detrimental.”

Only one of the two studies suggested any harm. Residents of Copenhagen who reported doing sports for more than 10 hours a week had an 18 percent higher risk of dying over the next 25 years than those who did 2.6 to 4.5 hours a week. But the Danish researchers asked the roughly 8,700 participants how often they exercised only once, when the study began.

The bottom line: There is no good evidence that exercise—even at 3 to 5 times the recommended levels—increases the risk of dying prematurely, say the Physical Activity Guidelines for Americans. Those levels: at least 2½ to 5 hours of moderate—or 1¼ to 2½ hours of vigorous—exercise per week. 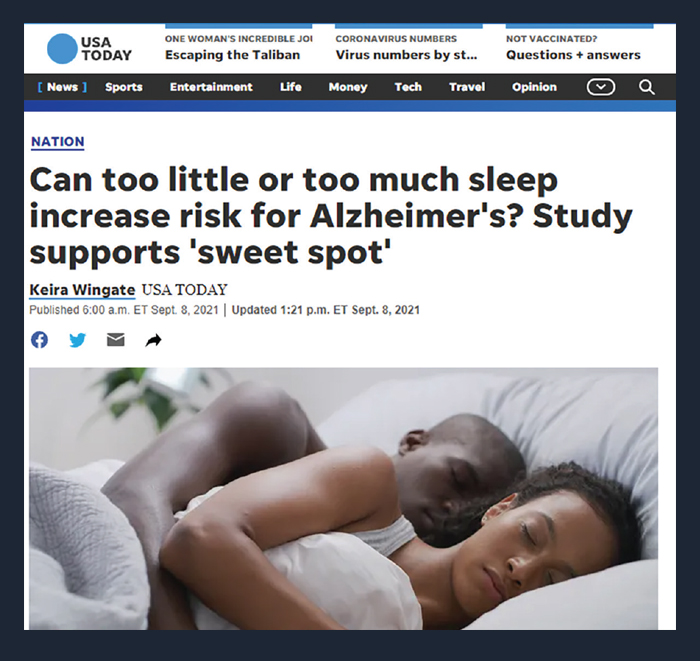 "New research shows that sleeping too much or too little could have a negative impact on the brain,” reported USA Today in September.

"A peer reviewed study published by the journal JAMA Neurology found that people who sleep six hours or less every night had elevated levels of beta-amyloid—a protein that accumulates to form amyloid plaques,” one of the first markers of Alzheimer’s disease, said USA Today.

The results suggest that “there’s something happening in short [sleep] that looks like Alzheimer’s disease,” noted the study’s lead author, “and that there is still a mystery with long sleepers,” said the article.

Oh, so too much sleep doesn’t increase the risk for Alzheimer’s, as the headline implied?

At least USA Today cited some of the study’s limitations.

“It relied on participants self-reporting how much sleep they got,” noted the article. “Participants also didn’t give information regarding health issues such as cardiovascular disease or diabetes, which could explain some of the differences.”

Nor did the researchers have data on sleep apnea or the use of medications that affect sleep.

But USA Today missed the biggest limitation: This kind of study—just a snapshot in time—can’t say whether “sleeping too much or too little could have a negative impact on the brain” or whether early Alzheimer’s (or other brain disorders) may have caused people in the study to sleep too little or too much.

The bottom line: Don’t assume that too little or too much sleep causes Alzheimer’s or other types of dementia. 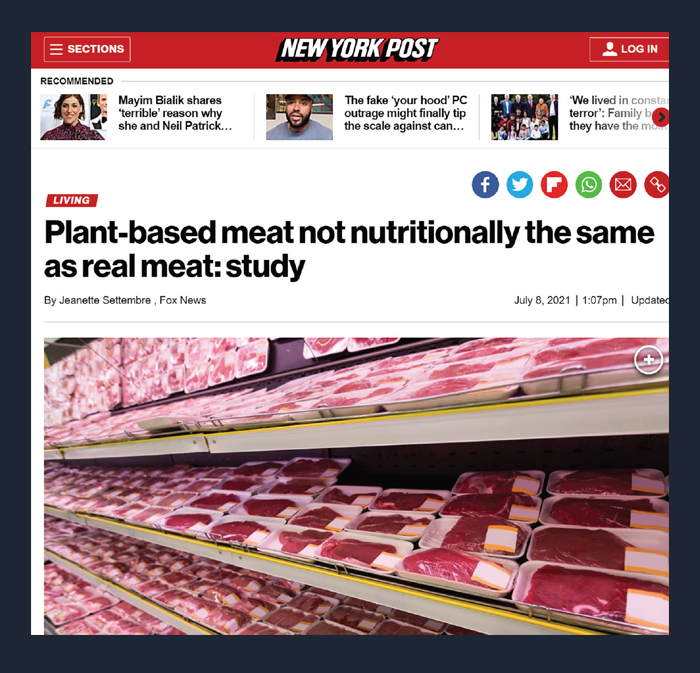 “Plant-based meat alternatives may look and cook like real meat, but scientists say that the nutritional components may not be the same,” reported a New York Post article—originally published by Fox News—in July.

“Alternative meat makers mimic the look, taste and texture of meat with iron-carrying molecules from soy among other ingredients like beets and berries and ramp up the protein with soy, peas and other plant-based ingredients,” explained the article.

“The study, however, found that several metabolites proven to be vital to human health were found either exclusively or in greater amounts of beef, including creatine [sic], spermine, anserine, cysteamine, glucosamine, squalene and the omega-3 fatty acid DHA.”

“‘These nutrients are important for our brain and other organs including our muscles,’ Stephan van Vliet, a postdoctoral researcher at the Duke Molecular Physiology [sic] said in a statement.”

Who wouldn’t want nutrients important for our brain and other organs? (Never mind that beef has only tiny amounts of nutrients like DHA.)

The plant meats the study looked at had some nutrients that aren’t found in beef, noted the article. “But that’s not to say that one is better than the other,” said van Vliet. Good to know.

It also would have been good for Post readers to know that van Vliet had received a grant from the North Dakota Beef Association for another study. Van Vliet disclosed that in the new meat study, but Fox and the Post did not.

The bottom line: Don’t worry about news reports that plant-based meats are inferior to real meat. For starters, red meat is “probably carcinogenic,” according to the International Agency for Research on Cancer. 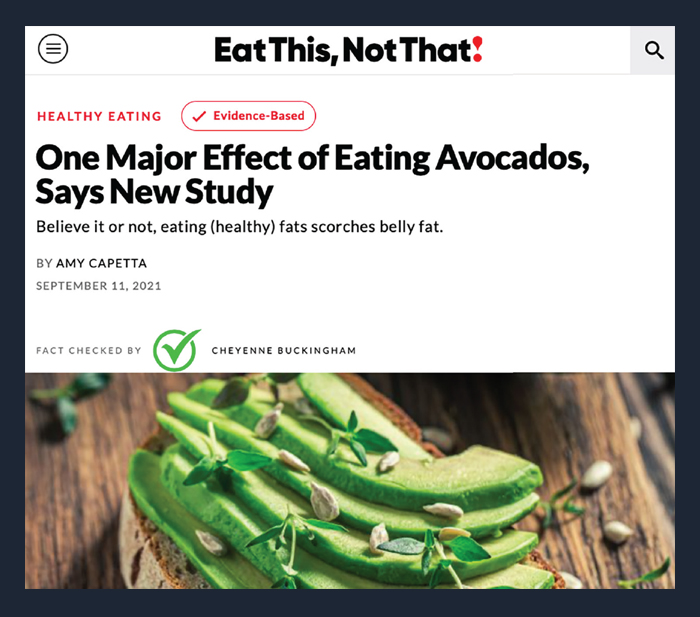 “Believe it or not, eating (healthy) fats scorches belly fat,” declared the September article on the “Eat This, Not That!” website.

In a 12-week study on 105 adults with either overweight or obesity, EatThis.com explained, “one group was provided with a daily meal that included an avocado while the other group’s daily meal did not include avocado,” though it contained foods with similar ingredients and calories.

The results: “The females who consumed an avocado daily showed a reduction in visceral abdominal fat—the hard-to-lose, dangerous fat that stores within the abdominal cavity and surrounds the organs—along with a reduction in the ratio of visceral fat to subcutaneous fat (the type of fat that you can pinch since it lays directly beneath the skin).”

No changes were seen in the men, said EatThis.com, which, to its credit, noted that the Hass Avocado Board funded the study.

However, the researchers’ plan—which they posted on the government’s registry of clinical trials (clinicaltrials.gov) in 2016—was to look at men and women together.

But why disappoint your funders? Instead, a press release about the study said, “Women who consumed avocado as part of their daily meal had a reduction in deeper visceral abdominal fat.” Too bad it wasn’t statistically significant.

Nutrition Action is completely independent. We accept no advertising and take no donations from corporations or the government. So we’re free to blow the whistle on dishonest products and to applaud the good ones.