Update: On August 28, Long John Silver's announced that it will discontinue the Big Catch and transition to a trans-fat-free frying oil by the end of 2013. "Partially hydrogenated oil does not belong in the food supply and we are glad that Long John Silver's will, by the end of the year, transition to a trans-fat-free oil for frying," said CSPI executive director Michael F. Jacobson. "We appreciate the speed and seriousness with which Long John's Silver's leadership addressed our concerns and made this important change for the better."

Laboratory tests released today by the Center for Science in the Public Interest show that Long John Silver's Big Catch meal, when comprised of fried fish, Hushpuppies, and Onion Rings, has an astonishing 33 grams of trans fat—the most powerful promoter of heart disease in the food supply. On top of that, the meal has another 19 grams of saturated fat, which also promotes heart disease, and nearly 3,700 milligrams of sodium, which promotes high blood pressure and stroke. It's easy to find fast-food meals with more calories—the Big Catch has "only" 1,320—but when it comes to clogging arteries, CSPI says the Big Catch is by far the "Worst Restaurant Meal in America."

What most startled CSPI researchers was the 33 grams of trans fat in the Big Catch meal, all of which comes from industrially produced partially hydrogenated frying oil. The American Heart Association recommends that people limit themselves to about two grams of trans fat per day—or about as much as one might consume from naturally occurring trans fat in milk and meat. In other words, Long John Silver's Big Catch meal with onion rings has 16 times as much trans fat as the heart association recommends—more than two weeks' worth.

"Long John Silver's Big Catch meal deserves to be buried 20,000 leagues under the sea," said CSPI executive director Michael F. Jacobson. "This company is taking perfectly healthy fish—and entombing it in a thick crust of batter and partially hydrogenated oil. The result? A heart attack on a hook. Instead of the Big Catch, I'd call it America's Deadliest Catch."

Most major chains have stopped using partially hydrogenated oil altogether, in response to bad publicity, lawsuits, and local government restrictions on its use. In 2006, before a CSPI lawsuit prompted KFC to stop using partially hydrogenated oil to fry its chicken, the worst meal on the KFC menu had 15 grams of trans fat—less than half the trans fat in the Big Catch with Onion Rings.

"Trans fat from partially hydrogenated oil is a uniquely damaging substance that raises your bad cholesterol, lowers your good cholesterol, and harms the cells that line your blood vessels," said Walter C. Willett, chair of the nutrition department at the Harvard School of Public Health. "It might have been defensible to use hydrogenated oil in the 1980s, before trans fat's harmfulness was discovered, but no longer. It is outrageous that Long John Silver's foods are still loaded with artificial trans fat and that the FDA still permits it in foods."

Also, CSPI charged that Long John Silver's website greatly overstates the amount of actual fish in the Big Catch meal, and greatly understates the amounts of trans fat and sodium in the side orders. "It's the largest fish we have ever offered, weighing in at 7 ounces to 8 ounces of 100-percent premium haddock caught in the icy waters of the North Atlantic," Long John Silver's executive Charles St. Clair stated in a press release. Its television ads boast that the haddock is "3X bigger," though it wouldn't be clear to consumers what it is three times bigger than. (Almost-invisible print indicates that the haddock is three times bigger than "one piece of uncooked Alaskan pollock" of unspecified size.) In fact, once CSPI researchers carefully removed the breading from the fish, they found an average of about four and a half ounces of actual fish and almost three ounces of oil-soaked batter. 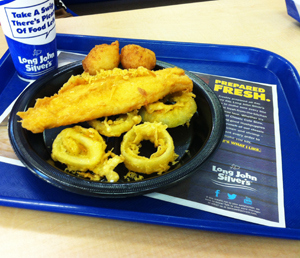 Finally, packaging for the Big Catch meal uses the word "lean" to describe its haddock. Haddock ordinarily is lean, but CSPI says the use of the word is deceptive when used in connection with such a high-calorie meal rich in artery-clogging fat.

Today CSPI formally notified Long John Silver's CEO Mike Kern that the chain will be sued if it continues to use partially hydrogenated oil in its deep fryers and if it continues to misrepresent both the amount of fish in the meal and the nutrition information for the side items. Making its fried foods virtually trans-fat free should be easy to do, since by law, Long John Silver's outlets in California, Philadelphia, and Boston, as well as King County, Wash., and Nassau and Suffolk counties in New York comply with those jurisdictions' strict curbs on the use of artificial trans fat in restaurants. CSPI researchers telephoned multiple Long John Silver’s restaurants in California, and all of them said they used canola oil in their deep-fryers, and not the partially hydrogenated soybean oil used in much of the rest of the country.

Also today, CSPI notified the Food and Drug Administration of its findings and urged the agency to revoke its approval of partially hydrogenated oil altogether. In 2004, CSPI petitioned the FDA to ban partially hydrogenated oil, as well as to require restaurants to inform customers when their foods were prepared with that benighted oil. The FDA quickly rejected the second petition, but has not approved or denied the call for a ban.

"It is extremely important to understand that the partially hydrogenated oil in Long John Silver's meals, other restaurant foods, and packaged foods are contributing to thousands of premature deaths annually," Jacobson wrote to FDA Commissioner Margaret Hamburg. "The FDA is failing its responsibility to the public by leaving that slow-killing ingredient in our food supply."