Age-related macular degeneration is the leading cause of vision loss for U.S. adults aged 65 and older. Diabetic retinopathy, glaucoma, and cataracts also impair the sight of millions of Americans. Here’s what may—and may not—keep your eyes in good working order.

Emily Chew is the director of the Division of Epidemiology and Clinical Applications at the National Eye Institute. An ophthalmologist and retina specialist, Chew has designed, led, or analyzed the Age-Related Eye Disease Study (AREDS, AREDS2), the Action to Control Cardiovascular Risk in Diabetes Eye Study, and the Early Treatment Diabetic Retinopathy Study. She spoke to Nutrition Action’s Bonnie Liebman.

A retina at risk

Q: What is age-related macular degeneration, or AMD?

A: In the eye, we have a structure called the retina, which lines the inside of the eyeball. Our best vision comes from the very central part, which is the macula.

With AMD, the retina loses tissues that are important for seeing well and focusing. Patients also have problems adapting to the dark—for example, going from a very bright room to a dark theater. And reading in dim light is much harder.

Eventually, you can get central vision loss, so you have this blind spot in the center of the visual field, and things are no longer sharp in the areas around it.

Q: And there are two types?

A: Yes. One is called neovascular, or the so-called wet type. Neovascular means you have abnormal new blood vessels that may lead to bleeding and an acute loss of vision. That type we can treat with injections into the eye of drugs that counteract vascular endothelial growth factor, or VEGF, which is important for growing new blood vessels.

The dry type is called geographic atrophy, which is a slow withering away of the normal cells and structures in the retina. Even patients who start out with the wet type are likely to end up with geographic atrophy. That’s the type that we have no treatment for.

Anatomy of the eye

The lens, which focuses light rays onto the retina, is supposed to be clear. Opaque areas, called cataracts, scatter light and blur vision. When the macula—the center of the retina—degenerates, it blurs the sharp, detailed vision that you need to read, drive, sew, etc.

The normal eye. Photoreceptors (rods and cones) produce waste that’s removed by the retinal pigment epithelium (RPE), Bruch’s membrane, and the choroid working together like a fireman’s bucket brigade. Waste that doesn’t get broken down collects in bundles called drusen (not shown).

Q: What led to the first Age-Related Eye Disease Study?

A: In the 1990s, we had a study looking at the natural history of macular degeneration. But we wanted to see if we could treat it.

At the time, trials were testing whether very high doses of vitamin E, vitamin C, and beta-carotene could prevent cancer and cardiovascular disease because those vitamins are antioxidants.

Q: And some evidence suggested that antioxidants could protect the retina?

A: Yes. So the first AREDS trial randomly assigned 3,640 people with macular degeneration to take either a high dose of three antioxidant vitamins—E, C, and beta-carotene—or zinc, or both, or a placebo for five years.

We added zinc because a small study suggested that it could reduce vision loss in people with macular degeneration. We also included copper, because a high dose of zinc can make it harder to absorb copper, and a copper deficiency can cause anemia.

Q: What did AREDS find?

A: The AREDS supplements didn’t stop people from progressing from early to intermediate macular degeneration. But in people who had intermediate AMD, the combination of vitamin C, vitamin E, beta-carotene, zinc, and copper resulted in a 25 percent reduction in the risk of progression to late AMD after five years.

We have calculated that 13 people would need to take the AREDS supplement for five years to prevent one person from progressing from intermediate to late AMD.

A: Yes. And we still saw about a 30 percent lower risk of late AMD in the supplement takers five years after the trial was finished.

And by then, 70 percent of people in both groups were taking the supplement, which we offered everyone at no cost. No one was taking a placebo.

Q: What led you to do the second trial, AREDS2?

A: We were always concerned about the beta-carotene in the supplement we were testing, because two major trials had reported that high-dose beta-carotene supplements increased the risk of lung cancer in smokers or asbestos workers.

In fact, we asked the AREDS participants who were smokers or former smokers if they wanted to switch from taking either beta-carotene or the placebo to either zinc or the placebo. About two-thirds did. 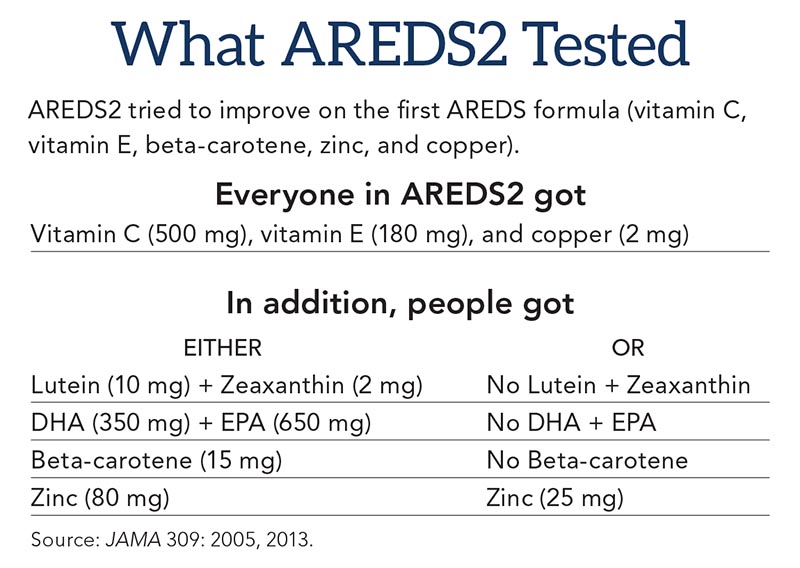 Q: So you wanted to test an alternative to beta-carotene?

A: Right. We knew all along that the pigment in the macula is made up of lutein and small amounts of its nearly identical cousin, zeaxanthin. But those supplements weren’t commercially available during the AREDS trial.

Fish is a major source of two omega-3 fats—docosahexaenoic acid, or DHA, and eicosapentaenoic acid, or EPA. And DHA is part of the structure of the retina. But we didn’t know if the omega-3s were responsible for the lower risk of late AMD in people who ate more fish.

So in AREDS2, we randomly assigned people who had intermediate AMD to lutein versus no lutein, omega-3s versus no omega-3s, beta-carotene versus no beta-carotene, and a high versus a lower dose of zinc. 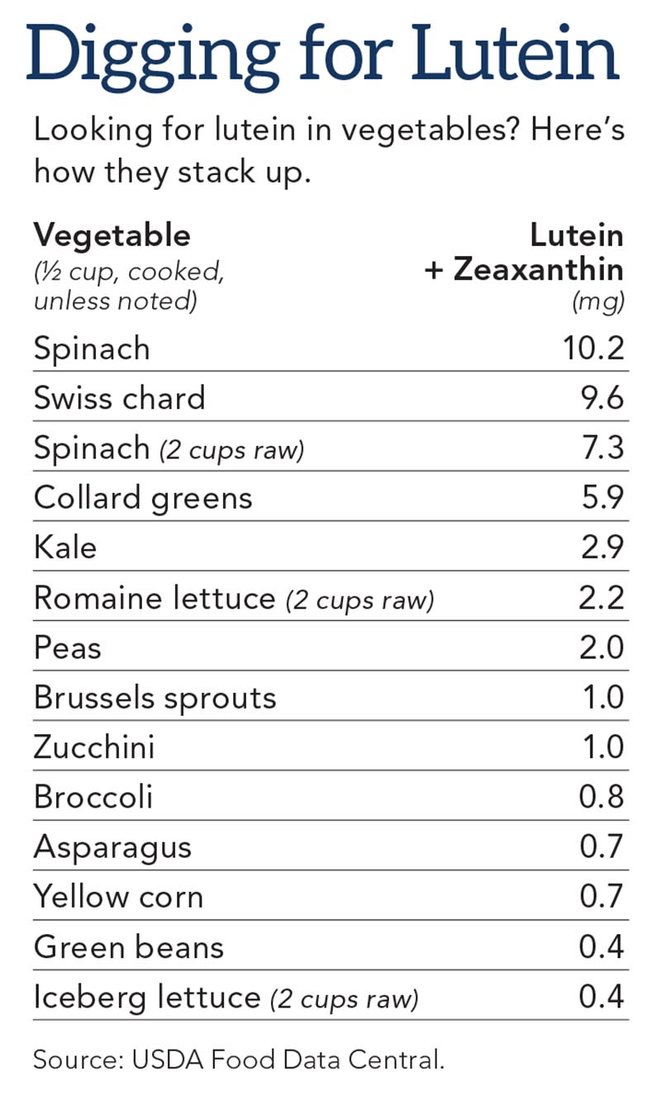 Q: Why test a lower dose of zinc?

A: We were concerned because in AREDS, people who took zinc had an increased risk of hospitalizations, mostly for urinary retention in men who had benign enlargement of the prostate.

But when we looked at the lower versus high dose of zinc in AREDS2, we saw no difference in adverse effects.

Q: What else did AREDS2 find?

A: DHA and EPA had no harmful or beneficial effect. And people who got beta-carotene had double the risk of lung cancer than those who got lutein and zeaxanthin. Roughly 90 percent of those cancers occurred in former smokers.

That’s why the PreserVision AREDS2 supplements you can buy have vitamin C, vitamin E, lutein, zeaxanthin, zinc, and copper, but no omega3s or beta-carotene. That’s the brand we used in the trial.

Q: What can you tell people who don’t have intermediate AMD?

A: The AREDS supplements are not for individuals with early or no AMD. But a healthy diet may help.

We asked the AREDS and AREDS2 participants—which included people with early or no AMD—about their usual diets, then followed them for 10 years.

Overall, the risk of progressing to intermediate AMD was about 20 percent lower in people who ate a healthy Mediterranean diet—that is, a diet that’s high in vegetables, fruits, beans, nuts, whole grains, and fish, has a moderate amount of alcohol, and has more unsaturated than saturated fat.

Those results are not as compelling as a randomized trial, but my Dutch friends have seen similar results in the Rotterdam Study. They often say that you can eat your risk away by having a good diet.

Q: What are cataracts?

A: The lens in your eye helps focus the light onto your retina. With age, the lens becomes more opaque, or cloudy.

We have a good treatment for that. Everybody knows someone who has had cataract surgery. But if we could find something that would delay cataracts, we could make a dent in rates of surgery.

However, in the AREDS trials, the supplements had no benefit. When we looked at people who ate few foods with lutein and zeaxanthin, those who got those supplements were less likely to need cataract surgery. But that result would need to be confirmed in a trial looking only at those people.

Since we don’t know who is going to get which type of cataract, our advice is to eat well, stop smoking, and wear sunglasses year-round to protect your eyes from ultraviolet rays.

Q: Can retinopathy be treated?

A: We do have good treatments. Some are injections of anti-VEGF drugs inside the eye that actually improve vision. The last 10 years have been remarkable in changing how we treat the disorder. Prior to that, we only had laser treatments, which are still an important part of our treatment strategies.

Q: Can people lower their risk?

A: Yes. The good news is that if you lower your hemoglobin A1c, which is a measure of blood sugar control, you can reduce the risk of diabetic eye disease.

Controlling your blood sugar, blood pressure, and lipids like LDL cholesterol are important goals for patients with diabetes. Diet has a lot to do with all three.

Q: What is glaucoma?

A: Glaucoma, which is typically caused by abnormally high pressure in the eye, damages the optic nerve. Over time, you can lose vision, usually starting along the sides of your visual field. It is more prevalent and occurs at a younger age among African-Americans. It usually has no symptoms.

Q: Wouldn’t you notice if you lost your side vision?

A: You might not, because if you’ve got two eyes, you’re always scanning. You might notice if you look straight ahead and you can’t see your hands when they’re held out to your sides.

Q: Does that test with a puff of air always detect glaucoma?

A: No. Simply measuring the eye pressure is not sufficient. An ophthalmologist or optometrist needs to test the degree that you can see beyond the center of your visual field and do a dilated eye exam to see if the nerve is damaged.

Q: Can a dilated eye exam also detect other disorders?

A: Yes. As you get older, a dilated eye exam is crucial to help us screen for eye diseases like macular degeneration, cataracts, and diabetic eye disease. They can all sneak up on you very easily. When your eyes are dilated, an ophthalmologist can view the retina more easily and fully.

Q: How often do you need an exam?

A: The American Academy of Ophthalmology recommends a complete eye examination at age 40, and even earlier if you have diabetes, high blood pressure, or a family history of eye disease.

If you’re 65 or older, you should have your eyes checked every year or two. And if you have diabetes or wear contact lenses, see your eye specialist every year, no matter your age.

Q: What is dry eye syndrome?

A: It’s a very common condition. Each time we blink, our tears moisten the cornea, the clear outer layer of the eye. The cornea works well if it’s well moistened.

Dry eye can feel like you have sand in your eye. It can cause blurred vision, and it can be quite annoying and distracting.

The main treatment has been replacing tears with artificial tears, but they’re inconvenient, and they don’t last long.

A: No. The DREAM study tested whether omega-3 fatty acids can improve hydration and help moisten the cornea. The trial randomly assigned roughly 350 people with dry eye to take 3,000 milligrams a day of DHA and EPA or a placebo. The omega-3s made no difference.

Q: What about supplements like Ocuvite, which claim to support eye health?

A: Other than PreserVision AREDS2 for people with intermediate AMD, we don’t recommend any supplements. It’s a crazy world these days in terms of what claims and supplements are out there. It’s not a well-regulated business.

How to protect your eyes