Each of these restaurant items manages to cram in close to a day’s calories, often accompanied by at least a day’s saturated fat, sodium, or added sugar.

That’s not easy. After all, a typical restaurant entrée has “only” about 1,000 calories. That’s one reason why “only” two out of three adults and one out of three children or teens are overweight or obese.
But these dishes go the extra mile...just so more of us can start looking for extra-large-size apparel. Bravo!

The information for this article was compiled by Jennifer Urban and Jolene Mafnas. The article was written by Lindsay Moyer and Bonnie Liebman.

Worst Way to Start the Day 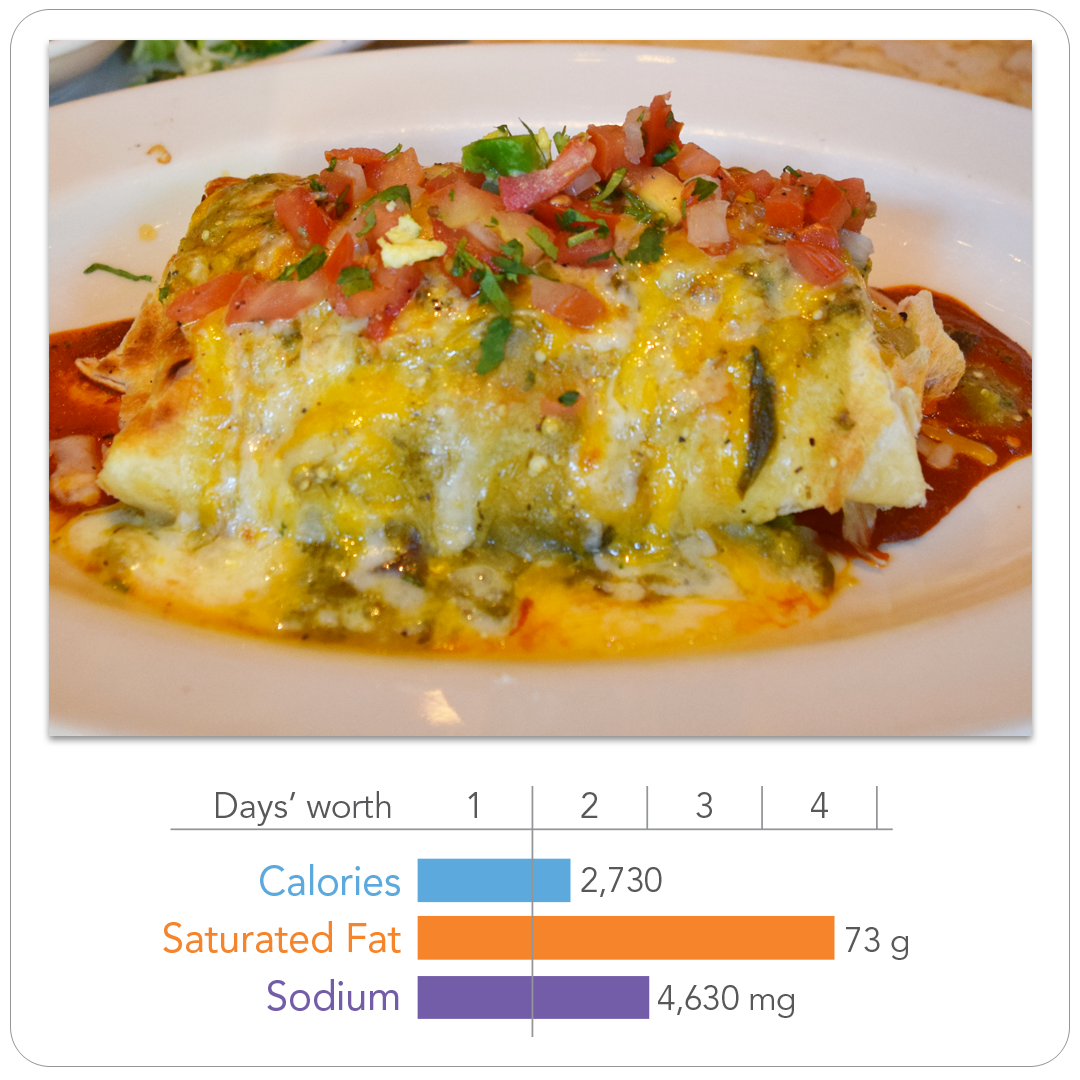 At Yard House, a Vampire Taco Combo comes with two 440-calorie tacos—each stuffed with pork, “bacon chorizo,” cream sauce, and guacamole— plus 610 calories’ worth of spicy rice and pinto beans.

And some people can’t leave Yard House without its signature 32 oz. Half Yard of IPA. Now we’re measuring alcohol by the yard? And drinking beer by the quart? 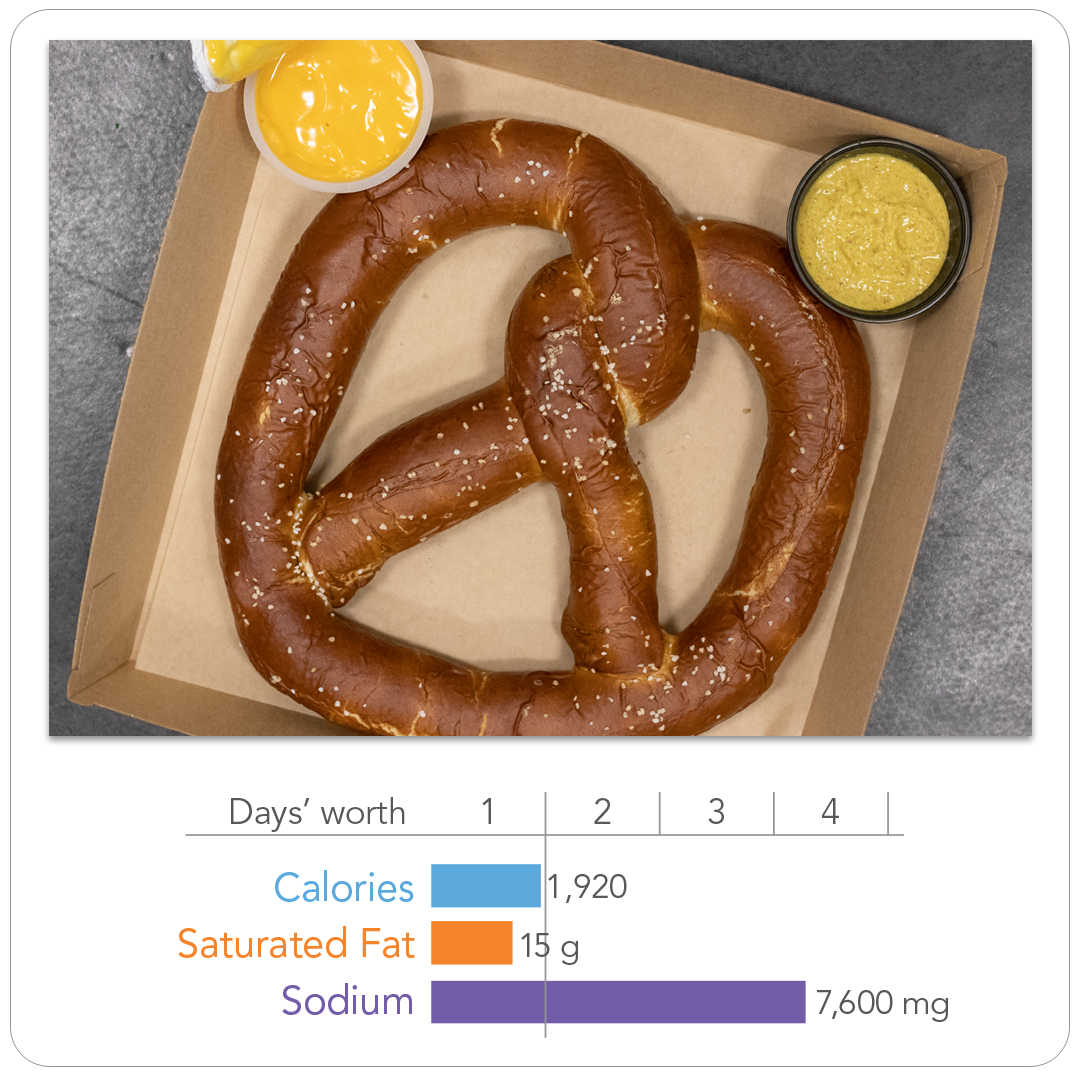 “Experience the legend,” says AMC. “Enjoy a snack that lasts all movie long when you treat yourself to 1.5 lbs. of soft Bavarian-style pretzel, sprinkled with coarse salt and served warm” with nacho “cheese” and mustard.

There’s nothing like eating your way through a 9”-wide Bavarian Legend Soft Pretzel (that’s a pound and a half of mostly white flour—more than a loaf of bread’s worth) as you watch a movie. You’d be better off (shudder) with a large popcorn.

Bonus: you get to take home the brand new fat cells you’ll need to store the calories you don’t burn during the show! 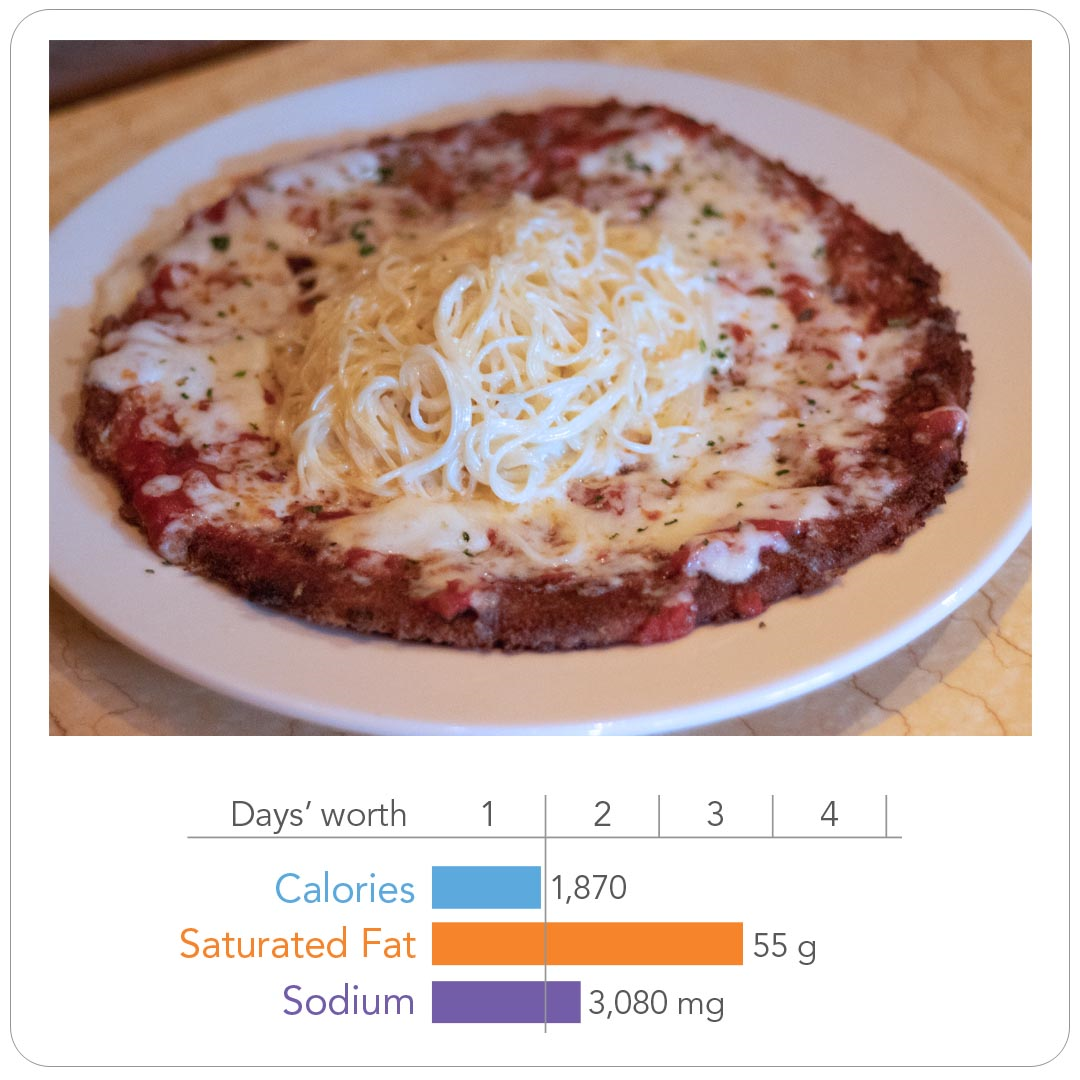 Brilliant. Distract diners with the Chicken Parmesan Pizza Style’s chicken, so they don’t think about its size (nearly 10 inches across), breading, Alfredo, cheese, or white flour. 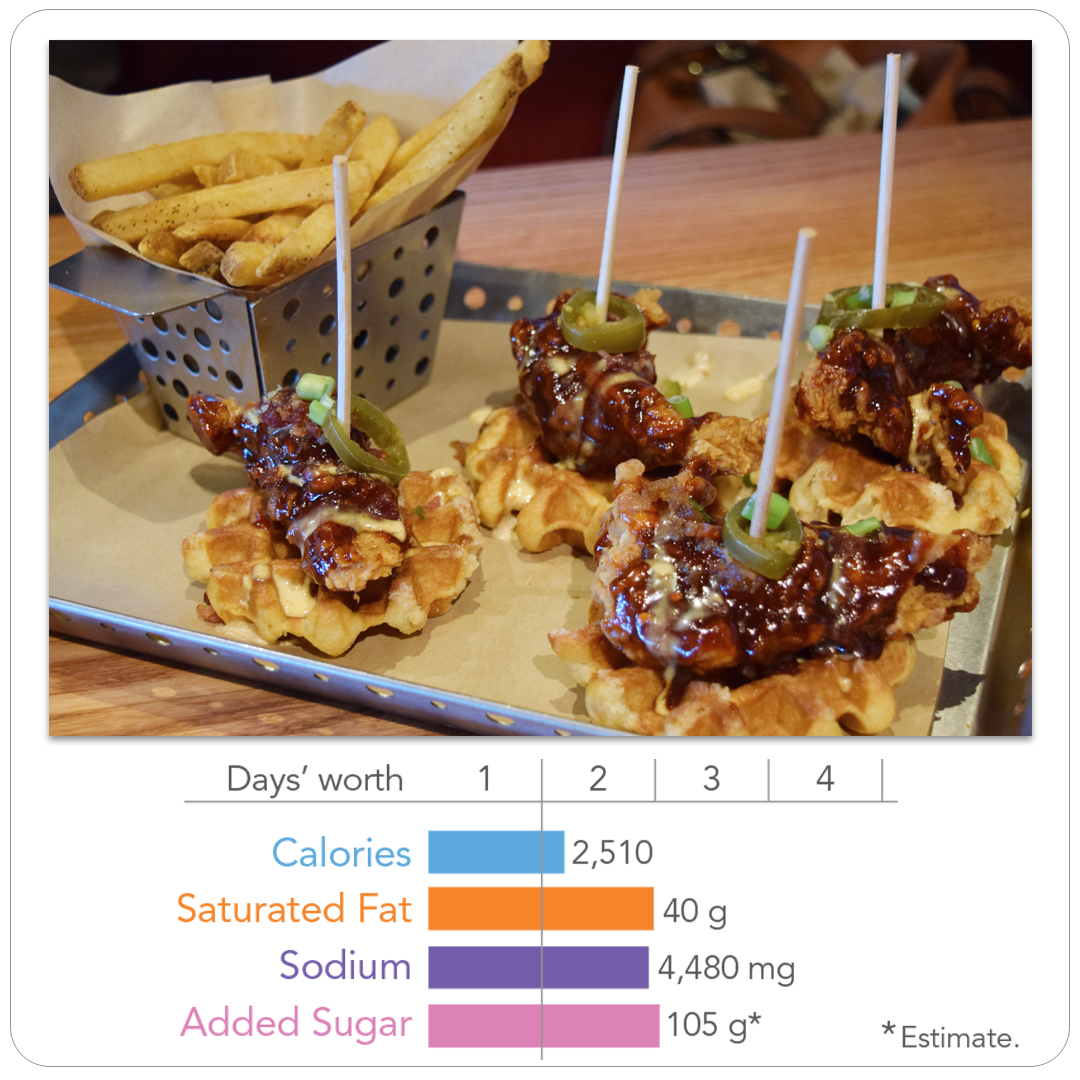 Oh to be a fly on the wall when Chili’s execs dreamed up the latest addition to the chain’s Crispers menu.

“We need a new shtick to sell our battered fried chicken. I’m thinking add some white flour to stay on budget.”

Overheard on the way out: “Next year, Crisper Cupcakes.” 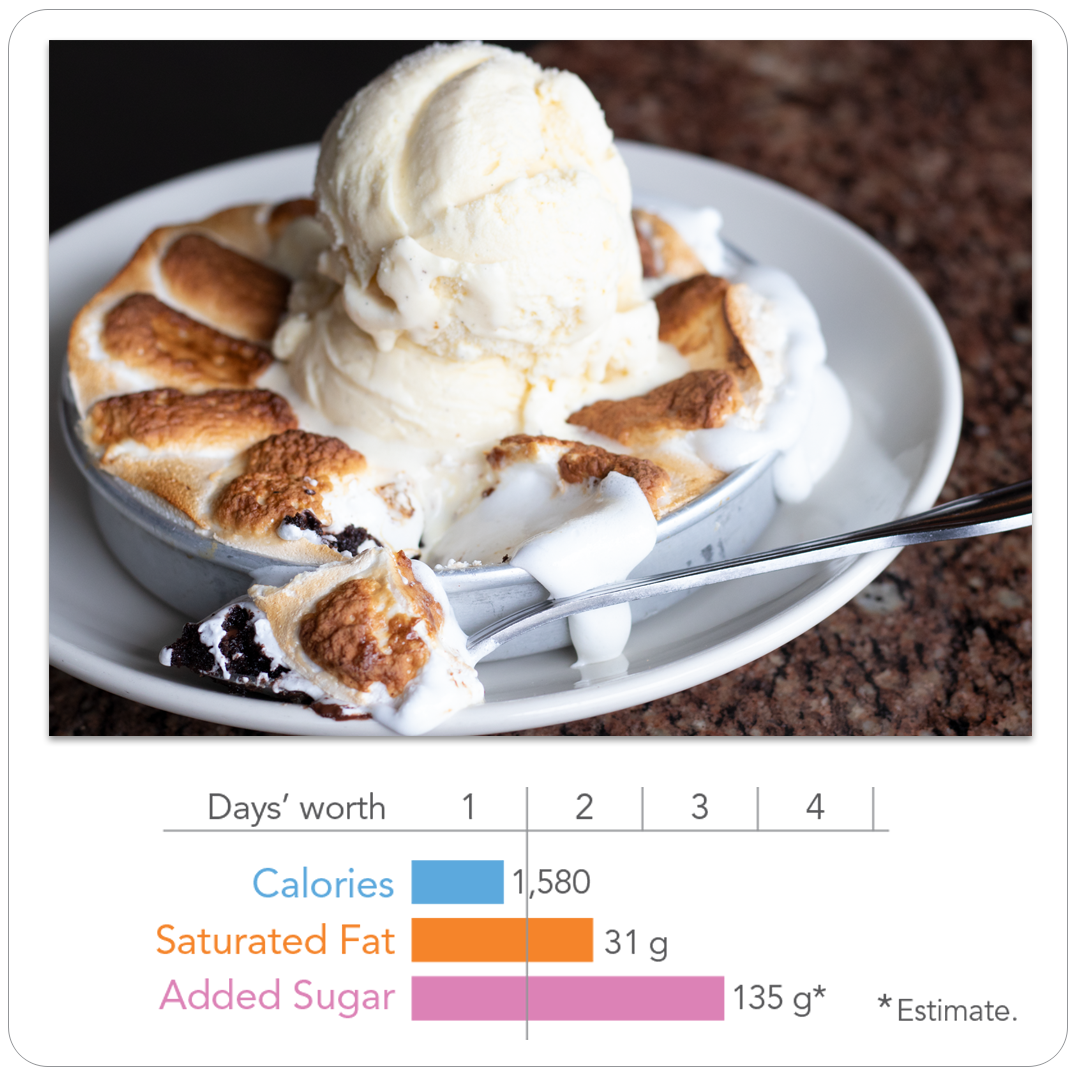 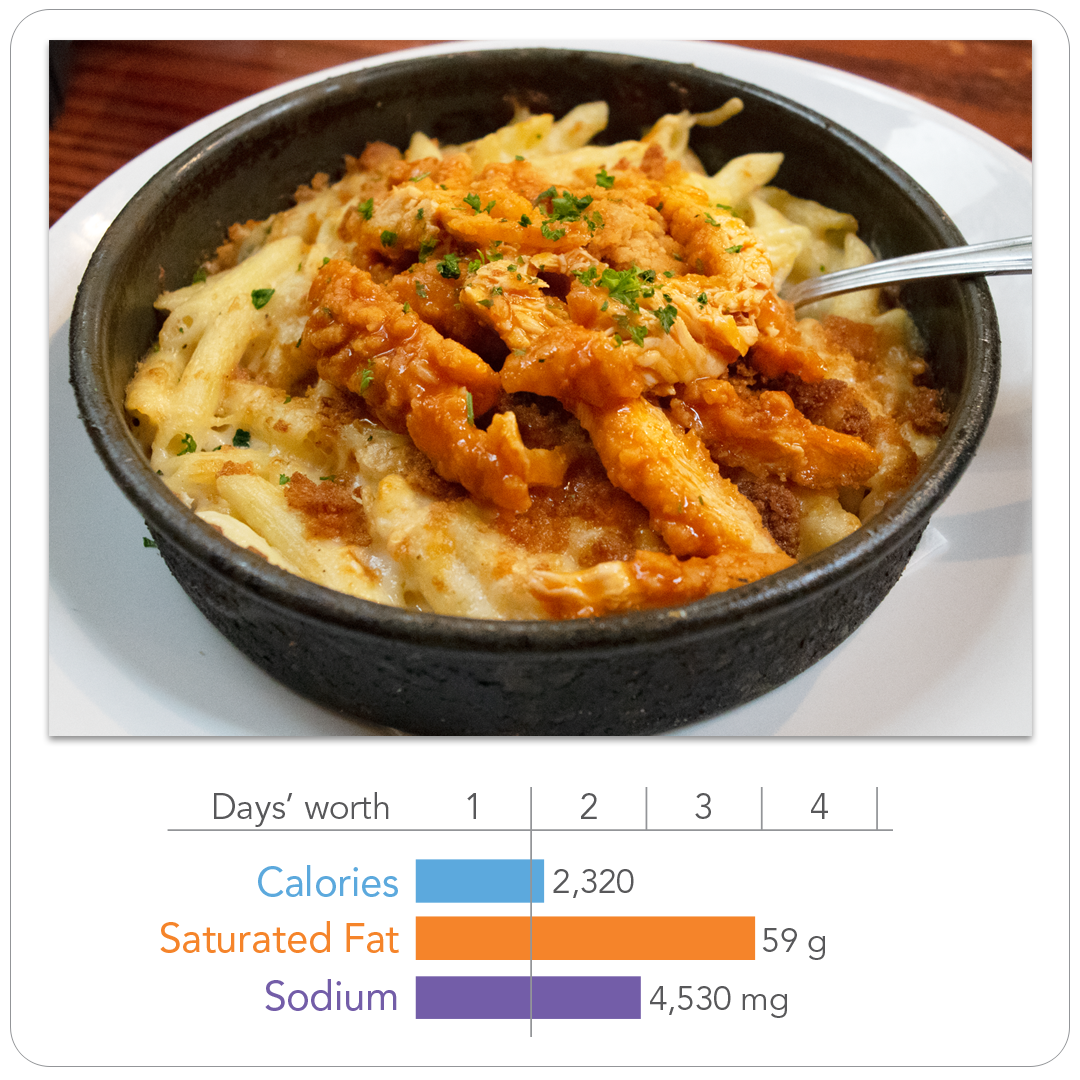 “Penne with aged cheddar, parmesan and romano topped with buffalo chicken and baked in a deep dish pan,” says the Uno Pizzeria & Grill menu. “How could you say no?” 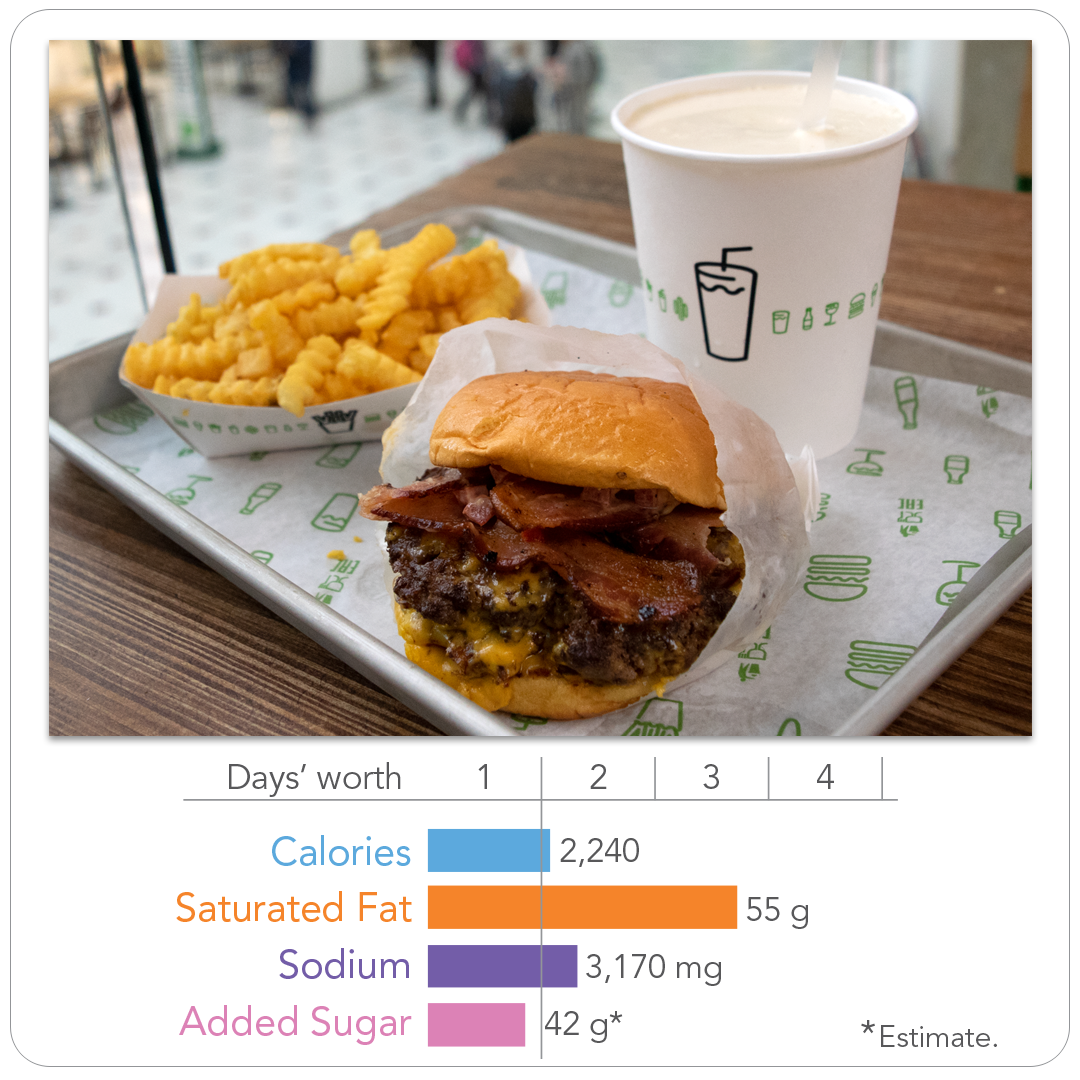 Just gaze at the quality of our sample order:

Peanut Butter Shake: “Make it malted, why don’t you?”

What a meal! You get 930 high-quality calories in the burger, plus 420 in the fries. And you get to wash it all down with another 890 from the shake. (Why add a shake? Well, it’s not called the Shakeless Shack.)

And many of those calories come from red meat, a white-flour bun, white potatoes, and the simple, high-quality sugar in the shake. Awesome!

Sign up for our exclusive guide to what to pay attention to on menus.