Jacobson, 73, who holds a Ph.D. in microbiology from the Massachusetts Institute of Technology, co-founded CSPI with two other scientists.  He led the group during its successful campaigns to put Nutrition Facts labels on packaged foods. Then, to highlight that law's failure to include restaurant meals, CSPI revealed the nutrient content of restaurant meals with high-profile studies on everything from movie theater popcorn to the fare at Chinese, Italian, Mexican, and chain restaurants.  In 1974 Jacobson created what became CSPI’s flagship publication, Nutrition Action Healthletter.  The advertising-free publication remains CSPI’s principal source of revenue, with about 600,000 subscribers.

More recently, CSPI led successful legislative pushes to modernize the nation’s food-safety laws and eliminate junk food from schools, spurred the Food and Drug Administration to eliminate artificial trans fat from the food supply, and pioneered the use of litigation to stop deceptive advertising and marketing of foods, beverages, and dietary supplements.

“Thanks to Mike Jacobson, the Center for Science in the Public Interest is the gold standard for science-based public advocacy,” said Lisa Heinzerling, the Justice William J. Brennan Jr., Professor of Law at Georgetown University and incoming chair of CSPI’s board of directors.  “For over 40 years, Mike has led the charge for giving Americans scientifically sound information about food, nutrition, and health, and for ensuring healthier and safer food.  He has big shoes to fill, but his vision and commitment have built a strong and vital organization that promises to be as important in 2020, 2030, and 2040 as it is today.”

“Michael Jacobson started a movement that inspired Americans to question what was in the food they eat and to make it safer and healthier,” said former New York City Mayor Michael R. Bloomberg, who currently serves as the World Health Organization’s Global Ambassador for Noncommunicable Diseases.  “Through his tireless devotion to science and public health, he helped save many lives, and the success he achieved will benefit generations to come.” 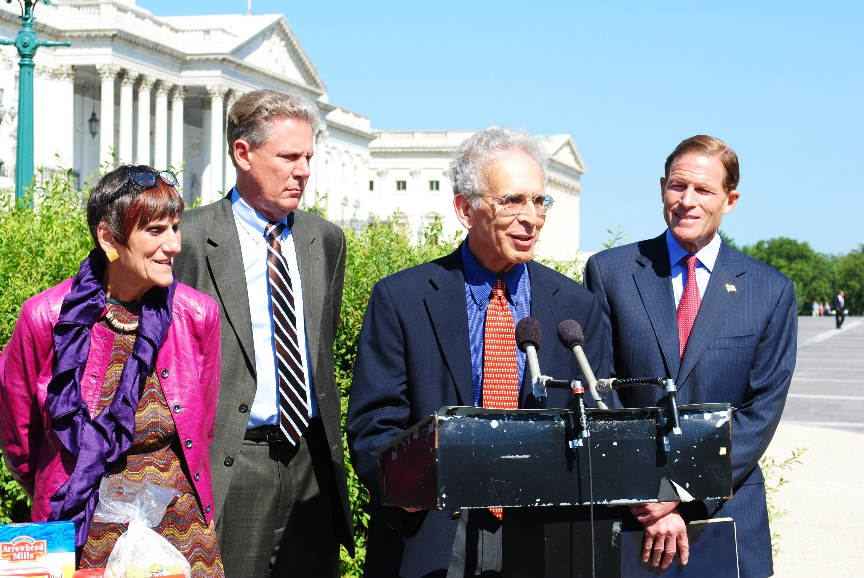 In the 1970s, Jacobson’s criticisms of cancer-causing sodium nitrite and nitrate led to sharp reductions in their use, and he successfully pushed for a ban on the dye Violet 1, another cancer-causing additive that was then used in the U.S. Department of Agriculture’s inspection mark on meat.  In 1977, to bring attention to CSPI's petition to ban ads for sugary cereals on children’s television, Jacobson delivered 170 decayed teeth to the Federal Trade Commission.

In the 1980s, Jacobson successfully urged the FDA to ban the use of sulfite preservatives, which were killing people almost instantly, on restaurant salads, potatoes, and other fresh foods, and lobbied for passage of the law requiring health warnings on alcoholic beverages.

After several years of advocacy, CSPI helped win passage of the Nutrition Labeling and Education Act of 1990, putting Nutrition Facts labels on all packaged foods.  That year CSPI also led the effort to win passage of the federal law defining “organic” foods.  In 1994, CSPI generated headlines around the world when the group tested fettucine Alfredo from Italian restaurants, calling the high-fat, high-calorie dish a “heart attack on a plate,” and again that year when its study of movie theater popcorn found that a medium order contained roughly 900 calories and twice as much saturated fat as a Big Mac plus a large order of French fries.

In the mid-1990s, Jacobson took on the controversial fat substitute known as olestra.  “Columbus is about to become the diarrhea capital of the nation,” Jacobson told reporters at a news conference in the Ohio city that served as an early test market for the fake fat.  CSPI collected thousands of reports from consumers who experienced adverse digestive symptoms after eating products made with olestra, such as low-fat—and now discontinued—Pringles.

In 2007, the threat of a CSPI lawsuit prompted Kellogg to enter into an agreement setting nutrition standards for the foods the company would advertise to children, and prompting other companies to institute similar policies.  In 2010 and 2011 the group pushed successfully for passage of the Healthy, Hunger-Free Kids Act and the FDA Food Safety Modernization Act, respectively.  The Affordable Care Act, the health care reform bill that also passed in 2010, included something CSPI had spent the prior decade advancing at the state and local level:  a provision requiring calorie counts on chain restaurant menus and menu boards.

“Michael Jacobson started a movement that inspired Americans to question what was in the food they eat and to make it safer and healthier,” said former New York City Mayor Michael R. Bloomberg.  “Through his tireless devotion to science and public health, he helped save many lives, and the success he achieved will benefit generations to come.”

Three of Jacobson’s most important targets have been trans fat, salt, and sugar, three of the biggest killers in the food supply.  CSPI’s 20-year campaign to get artificial trans fat labeled and ultimately eliminated from food culminated in 2015 when the Food and Drug Administration determined that partially hydrogenated oil—the source of artificial trans fat—was no longer considered safe for use in food.  CSPI had asked the agency to revoke the safety status of the substance 11 years earlier.  The virtual elimination of trans fat is saving thousands of lives a year, as are reduced sodium and sugar (and high-fructose corn syrup) consumption.

“I feel so privileged to have led a public-interest group that has had an enormous impact on government policies, corporate practices, and, most importantly, people’s lives,” said Jacobson.  “Once CSPI has a new executive director, I look forward to helping that person as much as I can and serving as CSPI’s chief scientist.”

In the next year, CSPI will continue its work to reduce consumption of sugar drinks—major contributors to diabetes and obesity—by means of education and special taxes, warning labels, and other policies; reduce the amounts of sodium in packaged and restaurant food; end junk-food marketing to young children; eliminate synthetic food dyes, which trigger hyperactivity in some children; and otherwise improve the food environment.

“From the trans fat ban to nutrition facts labeling, very few people have made the impact on public health the way Michael Jacobson has,” said New York City Health Commissioner Dr. Mary T. Bassett. “The New York City Health Department’s reputation for innovation owes him and Center for Science in the Public Interest a great debt. Without his tireless advocacy and support, public health efforts such as calorie posting, the trans fat restriction, and the sodium warning label—all grounded in our mission to promote and protect the City’s health—might not have been possible. As chief scientist for CSPI, I expect Michael to continue his work on behalf of New York City and the rest of the nation.”

“Mike Jacobson has been a force for progress,” said Representative Rosa DeLauro (D-CT).  “From keeping pathogens off poultry and produce to putting Nutrition Facts on packaged foods and restaurant menus, CSPI has been and will continue to be an important partner to those of us in Congress who care about food and health.  I’m very grateful for Mike’s leadership and look forward to working with the new leadership at CSPI.”