Pills Do Not Contain the Formula Used in NIH Trial 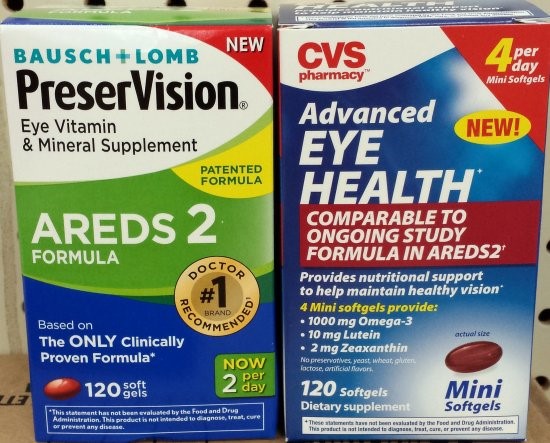 CVS claims that its Advanced Eye Health dietary supplement is comparable to the formula that was found in a major government study to slow the progression of age-related macular degeneration (AMD). But according to a complaint filed in state court in California, the CVS formula does not contain vitamin C, vitamin E, zinc, or copper—all parts of the specific formula that the National Institutes of Health found to be effective at reducing the risk of AMD’s advancement.

Labels for CVS Advanced Eye Health prominently state that it is "comparable to [the] ongoing study formula" used in the Age-Related Eye Disease Study 2 (AREDS2). AREDS2 followed up on an earlier NIH study that concluded that daily supplementation with vitamin C, vitamin E, beta-carotene, zinc, and copper could reduce the risk of developing advanced AMD by 25 percent after five years, at least in people at high risk of developing advanced AMD. AREDS2 modified the original AREDS formula by adding the carotenoids lutein and zeaxanthin, the omega-3s DHA and EPA, or both, and with or without beta-carotene. The NIH researchers concluded that lutein and zeaxanthin could be an appropriate substitute for beta-carotene, which was found to increase the incidence of lung cancer in former smokers. And, the researchers found that the omega-3s did nothing to slow or stop AMD.

The CVS formula does have the ineffective omega-3s, and it does have the carotenoids lutein and zeaxanthin, but it does not have the vitamin C, vitamin E, zinc, or copper.

"CVS is blatantly cheating older consumers who may fear developing age-related macular degeneration," said David Schardt, senior nutritionist at the Center for Science in the Public Interest. "It's a fraudulent bait-and-switch, since there's no evidence that the formula used in the CVS formula will provide any benefit whatsoever regarding AMD."

On its shelves, CVS places its Advanced Eye Health pills adjacent to Bausch+Lomb PreserVision supplements, which do contain the formula used in AREDS2, giving consumers another misleading indication that the CVS pills might contain the AREDS2 formula, according to the complaint.

The lawsuit was filed in Superior Court of California for Marin County on behalf of two California men who suffer from AMD and purchased CVS Advanced Eye Health on the belief that it contained the AREDS2 formula. The plaintiffs are represented CSPI litigator Amanda Howell, former CSPI litigation director Stephen Gardner, Marc R. Stanley, Martin Woodward, and Matthew J. Zevin, all of the Stanley Law Group, and John Roddy and Elizabeth Ryan of Bailey & Glasser.