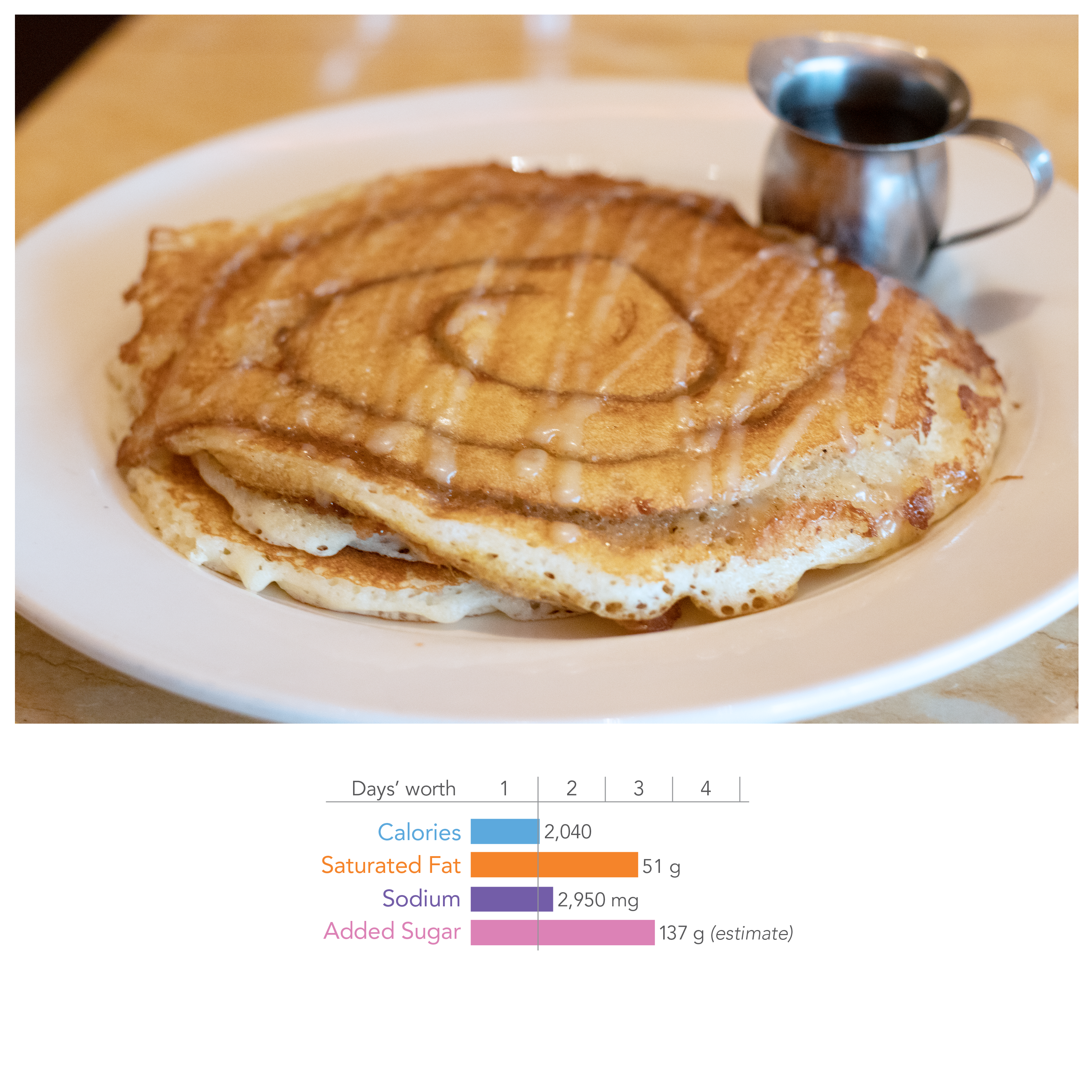 Few of us would consider eating 11 Krispy Kreme Original Glazed Doughnuts in one sitting. But that’s the nutritional equivalent of The Cheesecake Factory’s Cinnamon Roll Pancakes—the 21st menu item from that chain to receive one of the Xtreme Eating Awards that the nonprofit Center for Science in the Public Interest has conferred on America’s restaurant chains since 2007.

This particular brunch item from The Cheesecake Factory has a day’s worth of calories (2,040), two and a half days’ worth of saturated fat (51 grams), more than a day’s worth of sodium (2,950 milligrams), and almost three days’ worth of added sugar. (It contains 137 grams of total sugar, which CSPI estimates is all or nearly all added sugar.) And like the other seven “winners” of the 2019 Xtreme Eating Awards, it helps explain why two out of three American adults and one out of three children and teens are overweight or obese.

“Pancakes with syrup or cheeseburgers are never a health food, but it seems like The Cheesecake Factory, Chili’s, and other chains are trying to outdo each other to make them worse,” according to CSPI senior nutritionist Lindsay Moyer. “With a third of our calories eaten away from home, restaurant meals warp our perspective of what constitutes a normal serving, and contribute to obesity, type 2 diabetes, heart disease, and other health problems.”

Among the other 2019 Xtreme Eating Awards are:

Topgolf’s Injectable Doughnut Holes: The driving range/sports bar chain encourages diners to use plastic syringes to inject chocolate, raspberry jelly, and/or Bavarian cream goo into each “hole.” With a day’s worth of calories (1,970), nearly two days’ worth of saturated fat (37 grams), nearly a day’s worth of sodium (1,880 mg), and two days’ worth of added sugar, it’s like eating four Burger King Double Cheeseburgers plus a large Coke.

Jimmy John’s Giant Gargantuan: This 16-inch sub has salami, capicola, turkey, roast beef, ham, provolone cheese, onion, lettuce, tomato, mayo, and oil & vinegar—and a day’s worth of calories (2,190) plus a day and a half’s saturated fat (29 g). And with more than three days’ worth of sodium (7,720 mg), it is by far the saltiest of the 2019 winners. It’s like eating three Subway Cold Cut Combo footlong subs, according to CSPI.

Chili’s The Boss Burger: “Five meats. One burger. 100% Boss,” is how the chain introduced this item in a press release. With smoked brisket, rib meat, jalapeño-cheddar smoked sausage, bacon, cheddar, lettuce, tomato, BBQ sauce, and ranch dressing, this burger plus fries has a day’s worth of calories (2,020), more than two days’ worth of saturated fat (47 g), and nearly two days’ worth of sodium (3,900 mg). It’s like eating three McDonald’s Triple Cheeseburgers plus a large order of fries.

Are these literally the worst chain restaurant meals in America? No, says CSPI.

“Although the 2019 Xtreme Eating winners are nutritional nightmares, plenty of other dishes are as bad or worse,” Moyer said. “The good news is that all chains with 20 or more outlets are now required to list calories on menus and menu boards, and expanded nutrition information upon request.”

The full list of the eight 2019 Xtreme Eating winners, which includes items from Sonic, Cracker Barrel, Maggiano’s, and Dave & Buster’s, is published in the July/August issue of CSPI’s Nutrition Action Healthletter.