Information compiled by Amy Ramsay with help from Melissa Pryputniewicz. 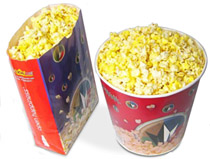 "Did you know that popcorn is among the healthiest—and tastiest—snacks around?" asks the Web site of the Popcorn Board, an industry group. "It's a whole grain

food that's low in calories and fat and it's a complex carbohydrate."

Maybe that's one reason people fork over $4 to $8 for a bag or tub of popcorn when they enter a movie theater. It sounds like they're munching on a stalk of broccoli, for goodness sakes.

Turns out the Popcorn Board is right…if you're talking low-fat popcorn or (fat-free) air-popped. Eating a tub of movie theater popcorn is more like eating an 8 oz. bag of potato chips, and that's assuming your theater pops in the best oil available and you get it without the "buttery" topping.

Here's what we found when we sent samples of popcorn and toppings from the three largest theater chains to an independent lab for analysis. (Each gave us nutrition facts for its popcorn. But just to be sure, we analyzed samples from three different theaters for each chain. For two of the chains—Regal and AMC—we went to theaters in the Washington, D.C., area. For Cinemark, our samples came from Texas, Illinois, and Maryland.)

Translation: A "small" popcorn (that's about 11 cups' worth) with no buttery topping has 34 grams of saturated fat. So even if you split it with a friend (unlikely), you each get nearly a day's worth of artery paste. And it gets worse from there.

Suggestion: Move your cardiologist's phone number to your speed dial before the lights go down.

Just kidding. It takes years to clog those arteries…and years for your blood pressure to respond to the salt shock (550 milligrams of sodium—a third of a day's worth—for a small and 980 mg for a medium or large).

The calories, on the other hand, may show up much sooner…and where you least want them.

Budget 670 for a small and 1,200 for a medium or large. You could think of each small as a Pizza Hut Personal Pan Pepperoni Pizza and each medium or large as two. But the two pizzas pack "only" a day's worth of sat fat—nowhere near the three days' worth in a medium or large popcorn.

How can a medium and large at Regal each hold the same 20 cups of popcorn?

Simple. The taller medium comes in a bag with straight sides, while the squatter large comes in a tapered tub that's wider at the top (see photo). The tub sure looks like it holds more. Other than for the free refill (shudder), why else would moviegoers pay $8 for a large (a medium is $7)?

Another oopsy-daisy: According to Regal, a medium has 720 calories, while a large has 960 calories. Both are lower than our lab results. Oh well. What's an xtra 200 to 500 calories when your snack hovers around the 1,000-calorie mark? They don't call them tubs for nothing.

Toppings: For customers who think plain popcorn isn't soaked in enough oil, Regal offers a "buttery" topping. According to Regal and the topping manufacturer, it adds 130 calories to a small, 200 calories to a medium, and 260 calories to a large.

We analyzed the topping to make sure that it had no trans fat. But we didn't check to see how much topping the concession staff at Regal—or any other chain—adds. Odds are, it varies. And odds are, it's more than what Regal claims.

AMC, the nation's second-largest chain (with 307 theaters in 30 states and the District of Columbia), also pops in coconut oil. The only good news: AMC's popcorns aren't as super-sized as Regal's. But they're bigger than the company acknowledges.

According to AMC, a small popcorn contains 225 calories. In fact, the small AMC popcorns that we bought weighed about 50 percent more than the company claimed. Our AMC smalls contained 370 calories and 20 grams of saturated fat—about what you'd get from that classic healthy snack: eight pats of butter.

Based on what we were served, AMC lowballs its other sizes as well.

For example, the company's 430-calorie medium morphed into 590 calories and 33 grams of saturated fat. And the 660-calorie large became a 1,030-calorie behemoth with 57 grams of sat fat. It's like eating a pound of baby back ribs topped with a scoop of Häagen-Dazs ice cream (except for the extra day's worth of sat fat in the popcorn).

What's next: fun-house mirrors that make you look skinny on your way out of the theater?

Toppings: Fake-butter fans must love AMC. The chain lets patrons pump their own "buttery" topping. No skimpy tablespoon of extra fat on a small or two tablespoons on a large, like Regal claims to use. With 120 calories per tablespoon, you should be able to squeeze another 200 to 500 calories into the bucket of fat cells in your lap.

The OmniHeart diets weren't designed to melt pounds, even though many of the participants were overweight or obese.

"In fact, we made sure they didn't cut calories or we wouldn't have known how much each diet mattered," says Janis Swain, an OmniHeart dietitian at Brigham and Women's Hospital in Boston.

In a separate study, Sacks put 800 overweight adults on diets that were high or low in fat, carbs, or protein. After two years, weight loss was about the same.3 "So there is also a tie for weight loss," he notes.

However, we've tweaked the diet to make it easier for people to lose—or not gain—weight by cutting caloric beverages and eating foods that are less calorie dense.

But those are details. Here's the big picture of what to eat.

Cinemark, with 296 theaters in 39 states, deserves some applause. The nation's third largest chain pops in non-hydrogenated canola oil instead of coconut.

Assuming you add no "buttery" topping, your heart can escape a Cinemark popcorn relatively unscathed. Your belly (and blood pressure) won't be so lucky.

If you share an unbuttered (8-cup) small with a fellow moviegoer, each of you will walk away with about 200 calories (seasoned with 340 milligrams of sodium).

That's the best you can expect from movie theater popcorn, unless you ask the theater to pop you a batch without salt. (All the Cinemark, AMC, and Regal locations we called said they would do that.)

A medium popcorn (14 cups) at Cinemark reaches 760 calories and a large (17 cups) hits 910 calories (and 1,500 mg of sodium—an entire day's quota). Since when is half-a-day's-calories' worth of corn, oil, and salt called a "snack"? Maybe since America started competing in the Sumo Belly-Lifting Olympics.

Toppings: Cinemark may use the healthiest popping oil, but you can still run into problems at the pump.

At some Cinemarks, the topping is essentially the same "buttery" non-hydrogenated soybean oil used by other chains. So for each tablespoon that you (or the servers) pour over your popcorn, you're adding another 130 calories that (we're guessing) you won't burn by the end of the day.

At other Cinemarks (especially in the West), the topping is made from real butter. Would you add butter to your French fries?

Each tablespoon of the butter topping delivers 9 grams of saturated fat—half a day's limit—plus 0.4 grams of naturally occurring trans fat, which will boost your LDL ("bad") cholesterol as much as manmade trans does.

So get out the calculator…and that extra dose of Lipitor. You just turned your large popcorn into two Big Macs.

A bag or tub of popcorn can make you thirsty, and theaters aren't about to let their customers suffer. So they offer sodas to wash down the salt and oil. 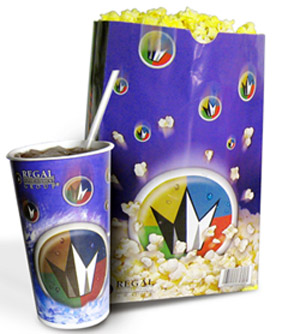 A small ranges from 16 ounces (2 cups) at Cinemark to 32 ounces (4 cups) at Regal. Assume that about a quarter of it is filled with ice. Even so, you're talking 150 to 300 calories' worth of sugar (unless you get a diet soda or water).

A large is only for those who possess a reinforced bladder (or arrive with a supply of Depends). It ranges from 44 ounces (5½ cups) at Cinemark or AMC to 54 ounces (nearly 7 cups) at Regal. Okay, so you may not need an extra 400 to 500 calories—and 26 to 33 teaspoons of sugar—right now. But who knows? Maybe a famine is just around the corner.

To save you money (how thoughtful), theaters offer combos. For example, for a mere $12, Regal hands you a medium popcorn and a medium soft drink, and AMC dishes up a large popcorn and a large soda. Where else can you be so distracted (by the movie) that you don't realize you've just swallowed 1,400 to 1,600 calories?

True, you might be a tad less hungry if you go back for a free refill. The problem is, you have to walk all the way to the concession stand for it. That's dozens of steps!

Maybe someday theaters will have employees walk up and down the aisles offering free refills of popcorn and soda during the movie. In the meantime, they could at least offer bigger buckets. Maybe garbage bags would work.