It’s not like America has a weight problem or anything. Nah. 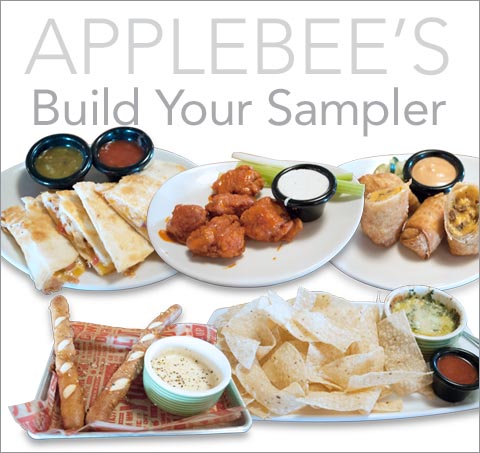 “Want more than one app?” asks Applebee’s (1,870 locations). Its solution to this pressing need: a Build Your Sampler with two to five “handpicked” appetizers or bar snacks. Take these five:

Congrats. You’ve graced your table with 3,390 calories, 65 grams of saturated fat, and 11,650 milligrams of sodium. Share with a friend, and you each get 1,700 calories. Split it four ways, and everyone polishes off 850 calories—about what you’d get in an Applebee’s Classic Burger with cheddar cheese.

And that’s before the entrées arrive. 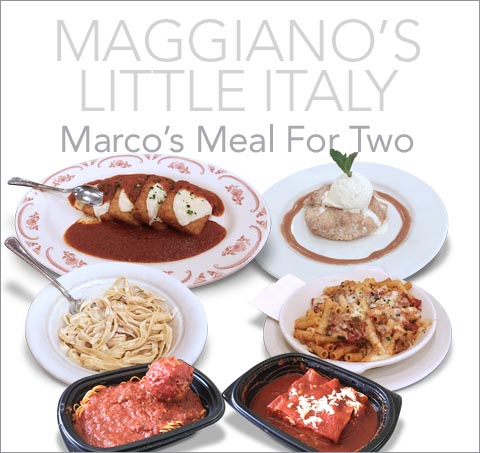 There’s nothing like a romantic dinner with your sweetie.

Take Marco’s Meal For Two at Maggiano’s Little Italy (51 locations). After the complimentary white-flour rolls, you choose an appetizer or flatbread or two side salads, move on to two “Classic” pasta dishes, and end with a dessert...plus two more classic pastas to take home. Such a deal!

Let’s say you and your date skip the rolls and go with the 1,530-calorie Mozzarella Marinara appetizer, the 1,400- calorie Taylor Street Baked Ziti (with Italian sausage) and 1,560-calorie Fettuccini Alfredo as your pasta dishes, and the 1,180-calorie Warm Apple Crostada for dessert.

Each of you shuffles out of the restaurant with roughly 2,840 calories plus a four-day supply of saturated fat (79 grams) and sodium (6,390 mg). And don’t forget the 11 teaspoons of sugar from the Crostada.

Of course, you could wrap some up to take home...except you’re already taking home two more pasta dishes for tomorrow (or next week, when you get hungry again).

If you pick the 1,020-calorie Mom’s Lasagna and the 1,250-calorie Spaghetti & Meatball with Meat Sauce (yes, just one meatball...because it’s about the size of a baseball), you’ve got another load of white flour seasoned with about 3,300 mg of sodium waiting for you tomorrow. And Mom’s Lasagna comes with a bonus 31 grams of sat fat. (Thanks, Mom.) 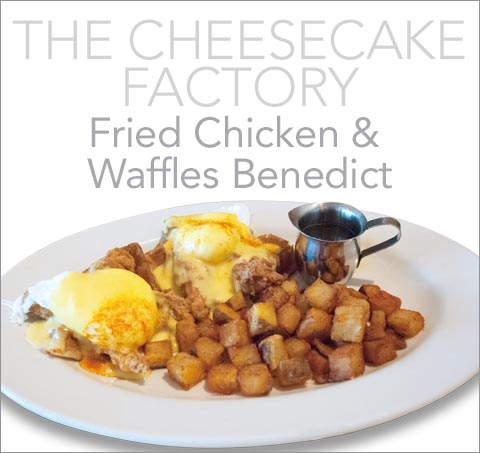 “Sundays were made for Fried Chicken & Waffles Benedict,” tweeted The Cheesecake Factory (189 locations) earlier this year. “What brunch hybrids are you craving?”

If your list includes a “Belgian waffle topped with crispy fried chicken strips, poached eggs and Hollandaise” served with maple-butter syrup and (usually) a side of breakfast potatoes, The Cheesecake Factory has your number.

True, that number comes to more than a day’s calories (2,580), a four-day supply of sat fat (86 grams—compliments of the Hollandaise and butter syrup), two days’ worth of sodium (3,390 mg), and 15 teaspoons of (mostly added) sugar.

It’s like eating two Marie Callender’s one-pound Chicken Pot Pies topped with half a stick of butter and a quarter cup of maple syrup.

But what are Sundays for if not to stock up on fat cells that you can—okay, probably won’t—burn by next weekend? 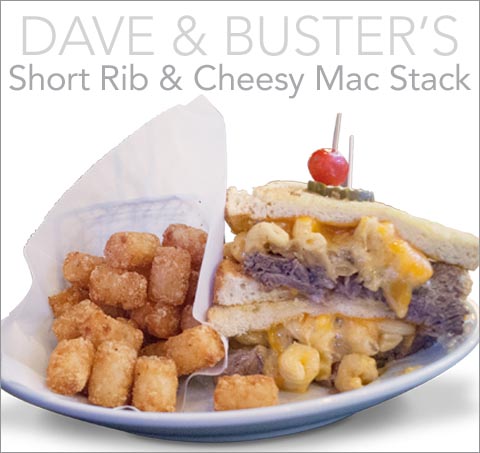 Dave & Buster’s mission is to create “frequent fun” with “the latest and greatest games, ultimate sports-viewing, extraordinary food and remarkable drinks.” Think of the 83-location chain as Chuck E. Cheese’s for adults.

You can see why the Short Rib & Cheesy Mac Stack is such fun. Was it Dave or Buster who thought of stuffing mac & cheese and short rib into a sandwich? Not enough carbs from the “thick slices of sourdough” (white) bread and pasta? No worries. The Stack comes with a side of “crispy seasoned tots.” 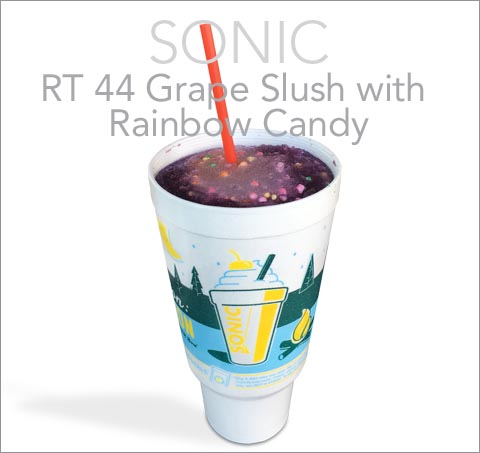 Craving the RT 44 Grape Slush with Rainbow Candy? You’re adding 370 calories’ worth of candy to a 44 oz. sugar slurry. The tab: 970 calories.

You might as well pour 1¼ cups of sugar into your Styrofoam cup, though you’d need some Red 40 and Blue 1 food dyes and artificial flavors to make it “grape.” It’s like downing three XL (40 oz.) Fanta Wild Cherry Slurpees at 7-Eleven.

And for “Happy Hour” (2 to 4 p.m.), SONIC slushes are half price! America’s Drive-In does its part to expand America’s waistline. 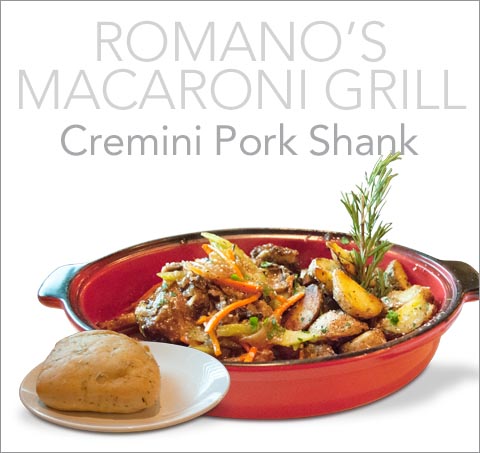 You can see why. Who could pass up two pounds of pork, potatoes, etc., that supply 1,800 calories, 43 grams of sat fat, and 3,700 mg of sodium? It’s like eating two Outback Steakhouse 10 oz. Ribeye Steaks, each with a side of seasoned french fries.

Romano’s is proud of serving “unforgettable meals that leave a lasting impression,” says the chain’s website. Look for it on your bathroom scale. 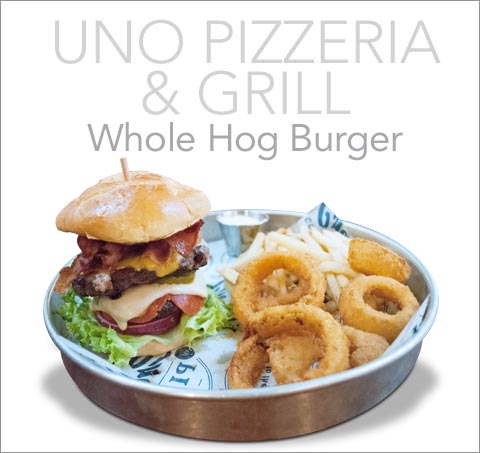 Extra calories, too! Enough to hit 2,850—more than a 24- hour supply. And don’t forget the three days’ worth of sat fat (62 grams), six-day stockpile of sodium (9,790 mg), and white-flour bun! You might as well eat four McDonald’s Quarter Pounders with Cheese and two medium fries doused with 18 packets of salt. 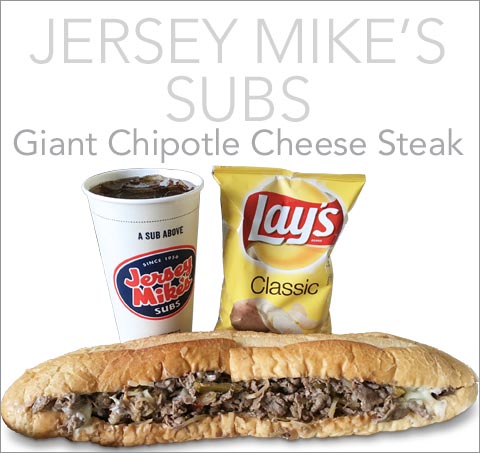 “Our Chipotle Cheese Steak is sure to put a pep in your step,” says Jersey Mike’s Subs, the fastest-growing major U.S. restaurant chain (1,125 locations). “Made with freshly grilled steak, melted white American cheese, peppers and onions, then drizzled with our spicy chipotle mayo.”

It’s not clear if you’ll feel peppy or sleepy after swallowing the 1,850-calorie, 14-inch Giant Chipotle Cheese Steak on a white-flour roll stuffed with 30 grams of sat fat and 4,330 mg of sodium. It’s like eating two Subway foot-long Roast Beef subs. And that’s if you don’t spring for a “Giant Combo” and add a 240-calorie bag of Lay’s chips and 400-calorie (32 oz.) Pepsi. 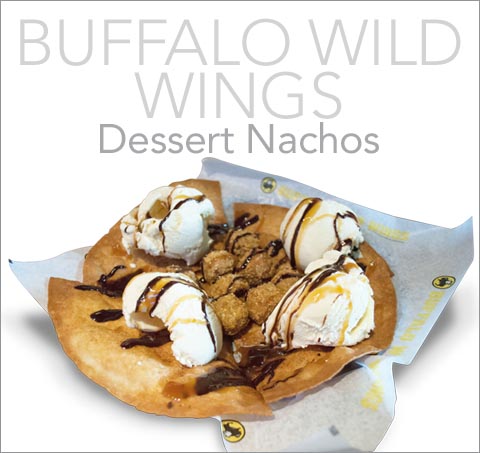 “Wings. Beer. Sports.” That’s what you get at Buffalo Wild Wings (1,052 locations), which calls itself B-Dubs. And Dessert Nachos.

It’s a “crispy flour tortilla sprinkled with cinnamon and sugar, loaded with ice cream and our gooey breaded cheesecake bites, all topped with chocolate and caramel sauce.”

Yup. There’s nothing like a giant whiteflour tortilla fried in beef tallow and topped with 30 teaspoons of sugar (from the ice cream, cheesecake bites, and sauces).

Surely, you have room for its 2,100 calories and 64 grams of saturated fat after your wings. And don’t forget the 5 grams of trans fat. (Most of it likely occurs naturally in the beef tallow, but odds are, it’s no less damaging.)

“Start your meal with nachos. End it with dessert nachos,” wrote B-Dubs on Facebook in 2015. “It’s the circle of nacho life.” Could end up being a pretty small circle.