We were so close. May 5th was the deadline for menus at chain restaurants and elsewhere to post calories, a long seven years after Congress decided that Americans have a right to know what they’re eating.

But less than a week before the deadline, lobbyists for pizza chains (led by Domino’s), convenience stores, and supermarkets convinced the Trump administration not just to delay but to reopen the rules to weaken them. Sigh.

That’s why we’re honoring Domino’s with the first Xtreme Putting Profits Before Public Health Award. Who cares about the obesity and diabetes epidemics, as long as the cash keeps rolling in to one of the nation’s premier purveyors of white flour and cheese?

Take the Xtreme Eating quiz to test your knowledge!

The information for this article was compiled by Leah Ettman and Jennifer Urban. The article was written by Lindsay Moyer and Bonnie Liebman.

Why stop at a triple meal? Why not serve four meats and four sides? Or five?

And forget the tray. How about a trough? 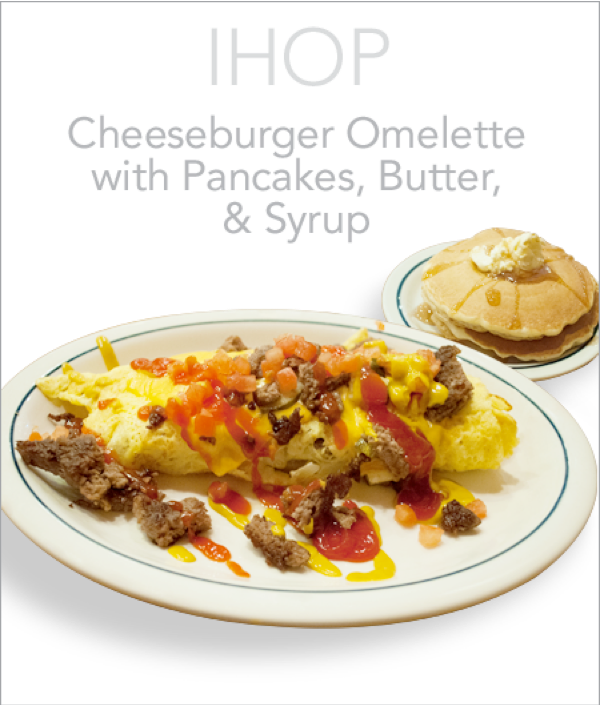 IHOP offers “the kind of meal you can’t get anywhere else, not even at home,” says the chain’s website.

Well, you could make the Cheeseburger Omelette at home. But which genius at IHOP thought of adorning eggs with hamburger patty pieces, hash browns, tomatoes, onions, American cheese, ketchup, mustard, and pickles?

And all before lunch! 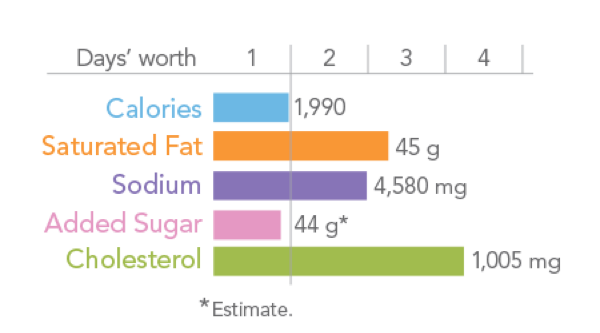 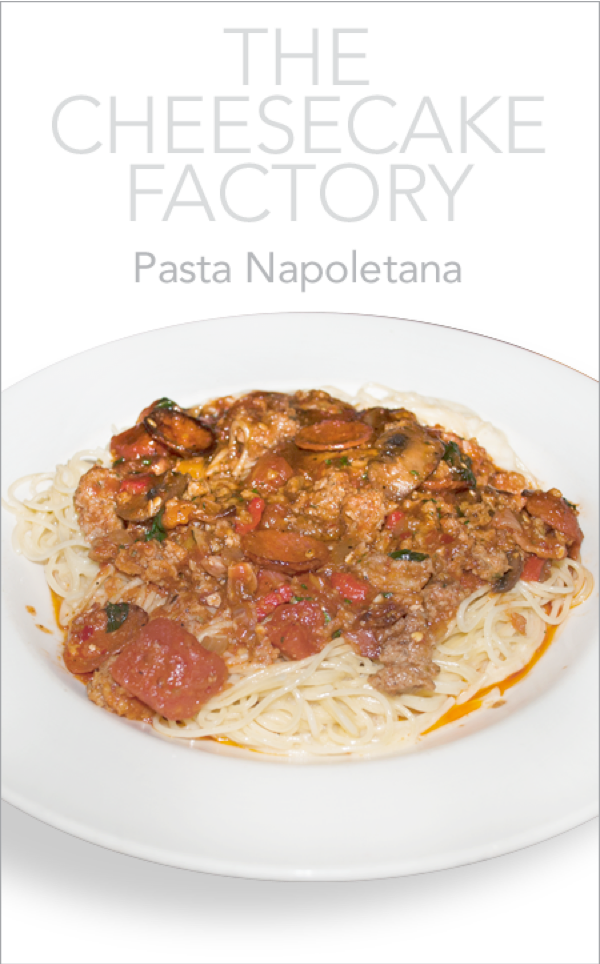 “How can we turn a meat lover’s pizza into a pasta?” asked Donald Moore, Chief Culinary Officer at The Cheesecake Factory, in a Facebook Live video in March.

That head-scratching challenge inspired the chain’s new Pasta Napoletana, which piles Italian sausage, pepperoni, meatballs, and bacon on pasta that’s been greased with butter and cream.

As it turns out, it is like eating a Pizza Hut Meat Lover’s Personal Pan Pizza...as long as you top the pizza with three cups of pasta and a cup of heavy cream.

Check with your waiter for a list of nearby cardiac care units.

Worst Cheese in a Leading Role 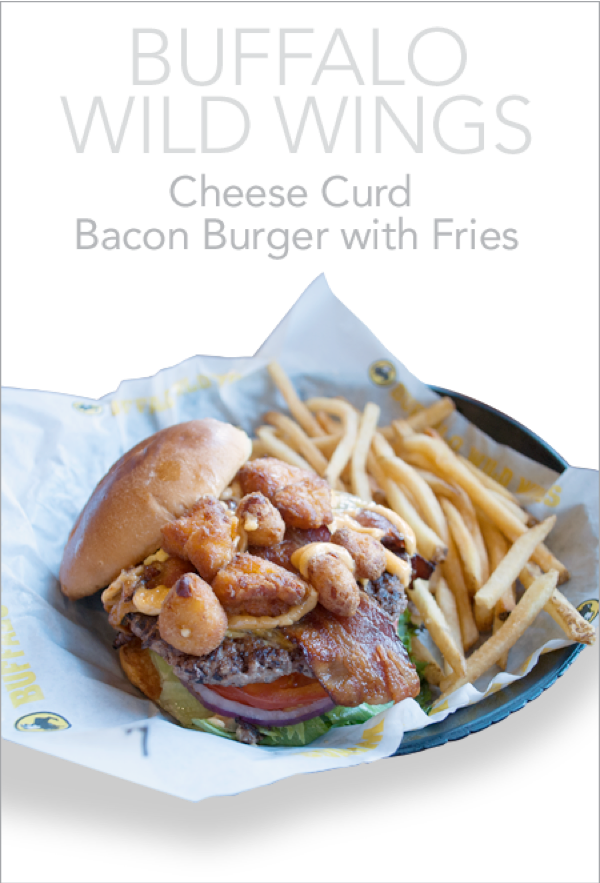 Battered, deep-fried cheese curds are a delicacy in Wisconsin. But we doubt that anyone has piled them on a burger, tossed on cheese and two bacon strips, and drenched the whole mess with a mayo-rich “cool heat sauce.”

That is, not until Buffalo Wild Wings started serving its Cheese Curd Bacon Burger. With a side of fries, you’re looking at the equivalent of roughly five Burger King Bacon Double Cheeseburgers.

Ain’t that the truth. We can safely say that the world has never before witnessed “a super-cheesy 12” quesadilla served pizza-style in eight slices, stuffed with Manchego and cheddar cheeses, pepperoni, and Italian sausage, then topped with even more pepperoni and Italian sausage, plus bacon, marinara, and mozzarella and Parmesan cheeses.”

To your arteries and waistline, a Carnivore Pizzadilla looks like 100 slices of pepperoni layered atop two Taco Bell Cheese Quesadillas, or half a stick of butter melted over three McDonald’s Quarter Pounders with Cheese. Mmm... 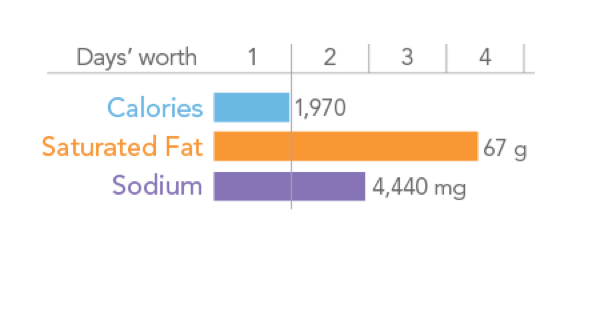 Most Damage from a Supporting Vegetable 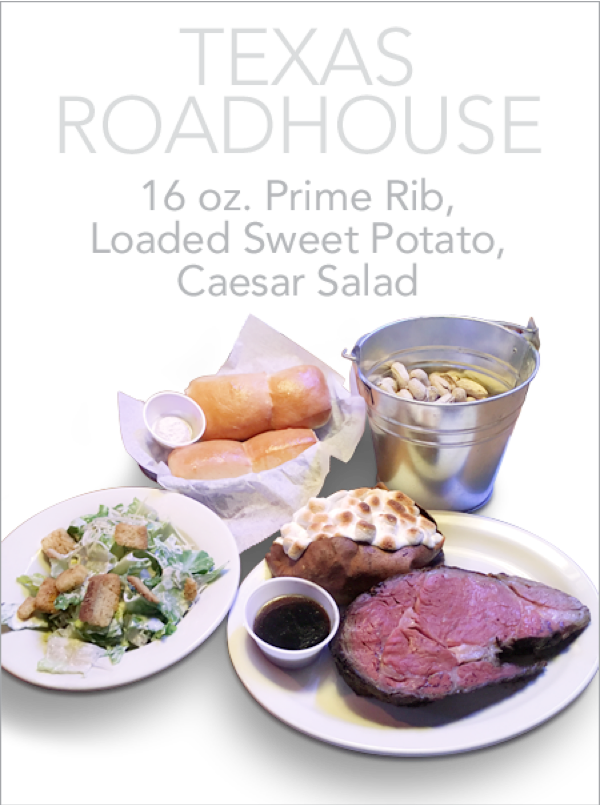 “We provide larger portions so you get more food for your dollar,” says Texas Roadhouse.

More, indeed. The massive 16 oz. Prime Rib alone has 1,570 calories. And one of the possible sides—you get your choice of two—is a real humdinger. For an extra 99¢, the Loaded Sweet Potato (770 calories) buries the tuber under a pile of mini marshmallows and caramel sauce. Congrats. You just turned your side dish into dessert!

Add a Caesar salad as your second side, and it’s like eating two of the chain’s 12 oz. New York strip steak dinners (with mashed potatoes and vegetables), plus a slice of strawberry cheesecake.

And that doesn’t include the all-you-can-eat peanuts, rolls, and butter offered to all Roadhouse patrons. Urp. 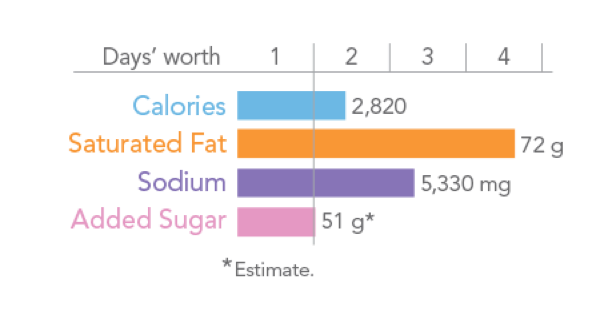 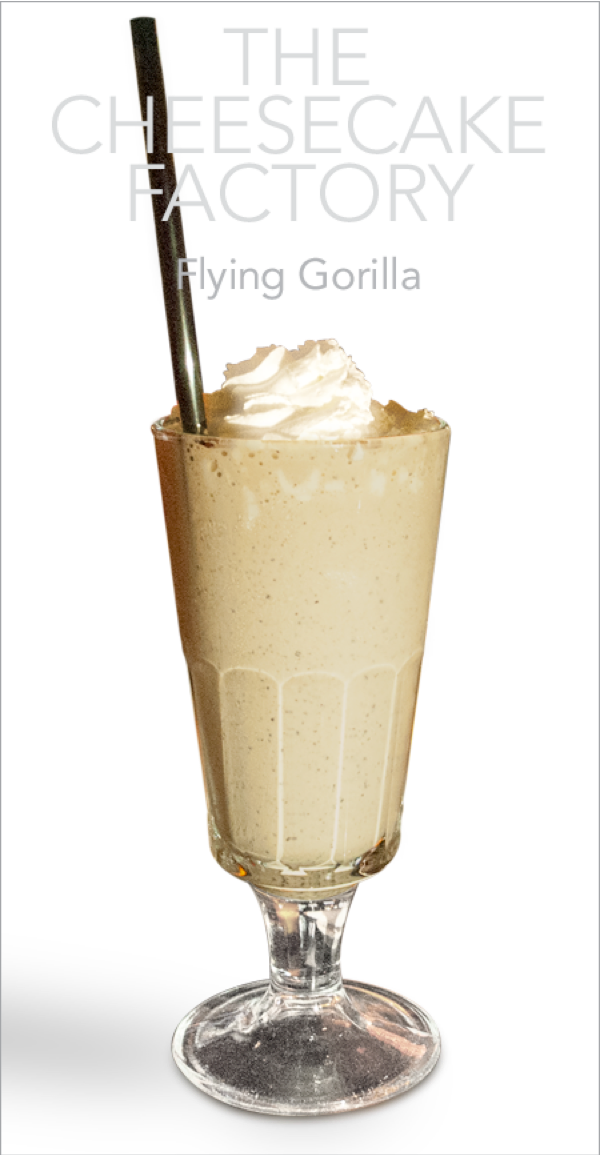 “A ‘kicked-up’ chocolate banana milkshake with dark chocolate and banana liqueurs.” That’s the Flying Gorilla cocktail. And the ever-Xtreme Cheesecake Factory adds just enough alcohol to make you forget that your glass contains 950 calories. How convenient.

It’s like kicking off your meal by pouring a 20 oz. Budweiser over five scoops of Breyers Chocolate ice cream. 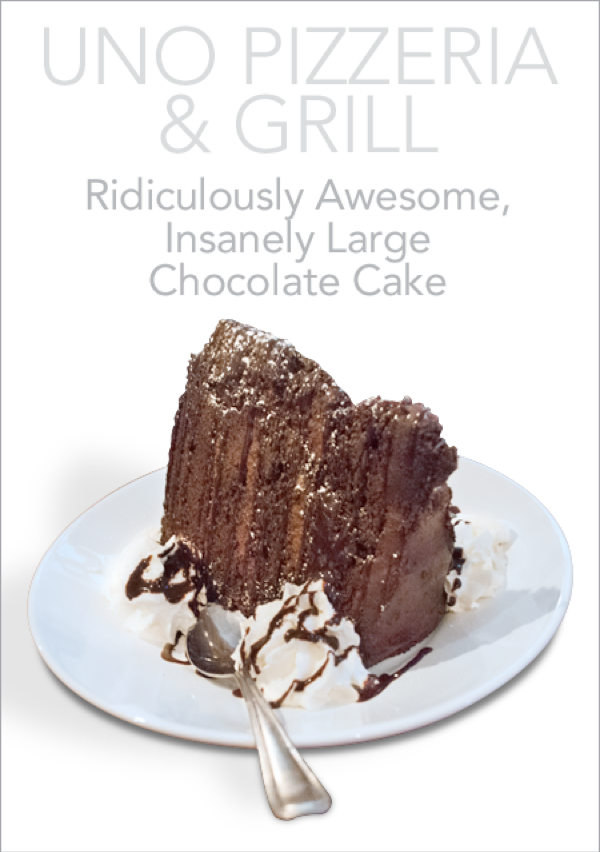 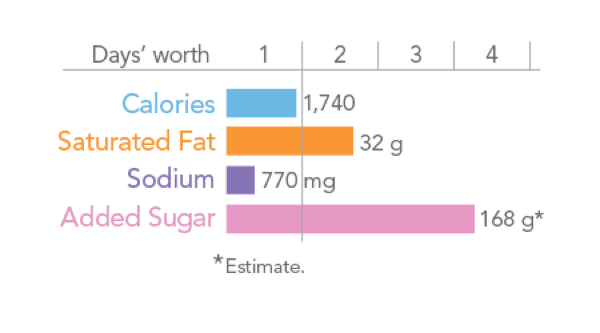