Bisphenol A is everywhere. And research suggests that it's not doing your health any favors.

Endocrine disruptors are chemicals that can interfere with estrogen, testosterone, thyroid hormone, insulin, or other hormones. At very low levels, they can turn on, shut off, or alter the signals that the hormones send throughout our bodies. And that can spell trouble.

BPA is an endocrine disruptor that's used to make polycarbonate, a hard plastic, and to protect the insides of cans, jar lids, and bottle caps. It also coats printed receipts from cash registers, gas pumps, and ATMs.

So it’s no surprise that nearly all of us have BPA in our bodies. Researchers report that tiny amounts of BPA cause subtle changes in fetal and newborn lab animals.

“If these kinds of changes occur in human infants, they might increase the risk of birth defects or infertility and cancer later in life,” says NC State biology professor Heather Patisaul.

Mothers with high levels of BPA in their urine during pregnancy, notes Patisaul, have children who are more likely to suffer from behavioral problems than the children of mothers with lower levels.1

Like most research on humans and BPA, that kind of study can’t prove cause and effect, but it’s troubling nevertheless.

Is BPA harmful to adults?

It’s not clear. “But there are certainly hints in the research,” says Patisaul. Some of the evidence:

Obesity. Researchers monitored the weight of nearly 1,000 nurses after they provided urine samples for BPA testing. After 10 years, the women who entered the study with the highest BPA levels gained an average of five pounds more than those with the lowest levels.2

Type 2 diabetes. Giving BPA to grown animals leads to greater insulin resistance in some studies.3 (Insulin allows blood sugar to enter cells. If your cells become resistant to insulin, you have an increased risk of type 2 diabetes and heart disease.) What about humans? Middle-aged U.S. nurses who had the highest levels of BPA in their urine were twice as likely to later be diagnosed with type 2 diabetes as nurses with the lowest BPA levels.4  However, that wasn’t true for nurses in their 60s and 70s. “The younger women, who have not experienced menopause, may be more vulnerable to endocrine disruptors than older, postmenopausal women,” says Qi Sun, an assistant professor in the department of nutrition at the Harvard T.H. Chan School of Public Health.

Heart disease. In an 11-year study of nearly 1,500 people in the UK, those with higher BPA levels in their urine at the start were 11 percent more likely to later be diagnosed with heart disease than those with lower levels.5  But the increased risk wasn’t quite statistically significant, so it could have been due to chance.

Cancer. “It is clear that BPA can act as an estrogenic compound,” says Ruth Keri, a cancer researcher at Case Western Reserve University. “So it is conceivable that BPA may promote the growth of any tumors that are driven by estrogens, such as breast cancers.” Exposing mice to BPA in the womb leads to an increase in breast tumors.6 “But there is much less research on exposure in humans and the impact that it can have on cancer susceptibility or growth,” notes Keri.

Despite the emerging evidence suggesting that BPA may be harmful, the Food and Drug Administration has ruled that it’s safe.

“Governments rely on classic toxicology studies that are good at looking for gross signs of illness, such as organ failure,” says Patisaul. “But a lot of scientists believe that many of those studies are out of date because they don’t look for subtle effects that could contribute to chronic disease.”

For example, a classic way to look for harm to an animal’s brain is to weigh it. “That’s pretty crude,” Patisaul points out. “Your brain has to be really sick to change weight.”

Instead, she and others count the number of estrogen receptors in the brain, which drops when animals are exposed to BPA in the womb and at a young age.7

“I think it makes the brain more vulnerable to hormone-dependent changes that can affect behavior and mood, so I worry about it,” says Patisaul. “But the FDA doesn’t consider those changes a reason for restricting or banning BPA at the levels of current human exposure.”

How to reduce your exposure to BPA

To minimize your exposure to BPA, avoid foods and beverages in cans. “BPA-free” cans and plastics may not be a get-out-of-jail-free card, though. Some researchers suspect that BPA substitutes may not be safe, either. 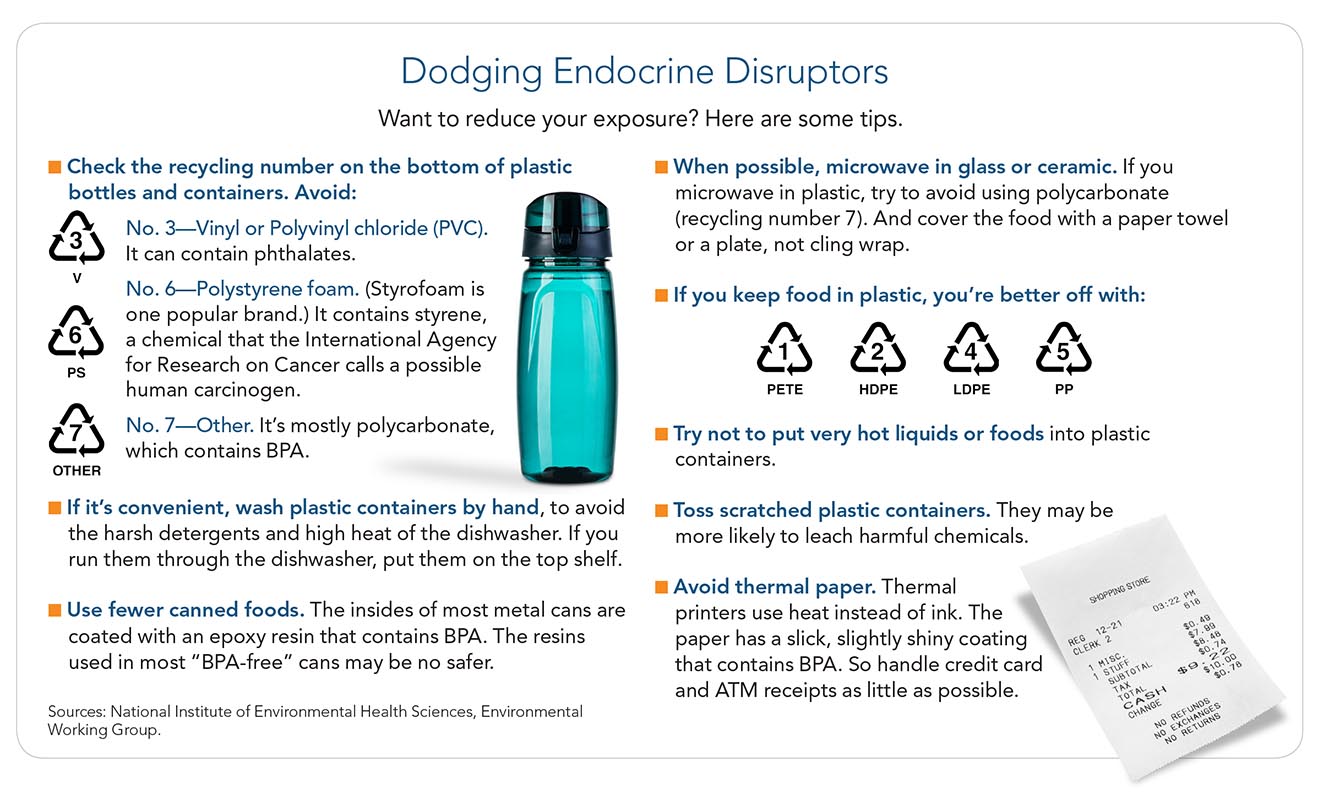