“The evidence is extremely clear that excess weight increases the risk of cancer,” says Walter Willett, professor of epidemiology at the Harvard T.H. Chan School of Public Health. “I would give it a 99 percent-plus certainty.”

Willett co-authored a 2017 report on obesity by the International Agency for Research on Cancer.

“Many people don’t think about excess weight as a cause of cancer,” notes Willett. “But it’s probably the second most important cause after smoking.”

That’s largely because so many people are overweight and because extra pounds boosts the risk of so many cancers.

(For any one person, smoking is far more dangerous. It raises the risk of lung cancer 25-fold. Excess weight rarely more than doubles your risk of a dozen or so other cancers.)

How can excess body fat lead to cancer?

Estrogen. The picture is clearest for some cancers of the breast (in postmenopausal women) and uterus, which are fueled by high levels of hormones like estrogen.

“So it’s no big surprise that women who are obese or even overweight have higher rates of cancers that are related to estrogen.”

Insulin. For pancreatic, kidney, and colorectal cancers, researchers are looking at another potential culprit.

Inflammation. Excess weight can lead to chronic, low-level inflammation that boosts the risk of cancers like adenocarcinoma of the esophagus.

“Overweight is a cause of gastric reflux and heartburn,” says Willett. “The acidity causes cell destruction and inflammation, and that process increases the risk of cancer.”

People with obesity are five times more likely to get esophageal cancer—which has a dismal 19 percent five-year survival rate—than those who are normal weight.

“The increase in adenocarcinoma of the esophagus is clearly related to the rise in obesity,” says Willett.

For tips to reduce your risk of cancer with diet, exercise, and more, check out our infographic. 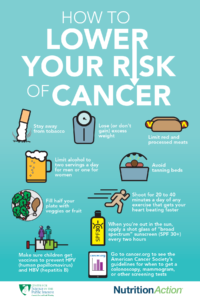