Pear in Mind: A Blog in the Public Interest 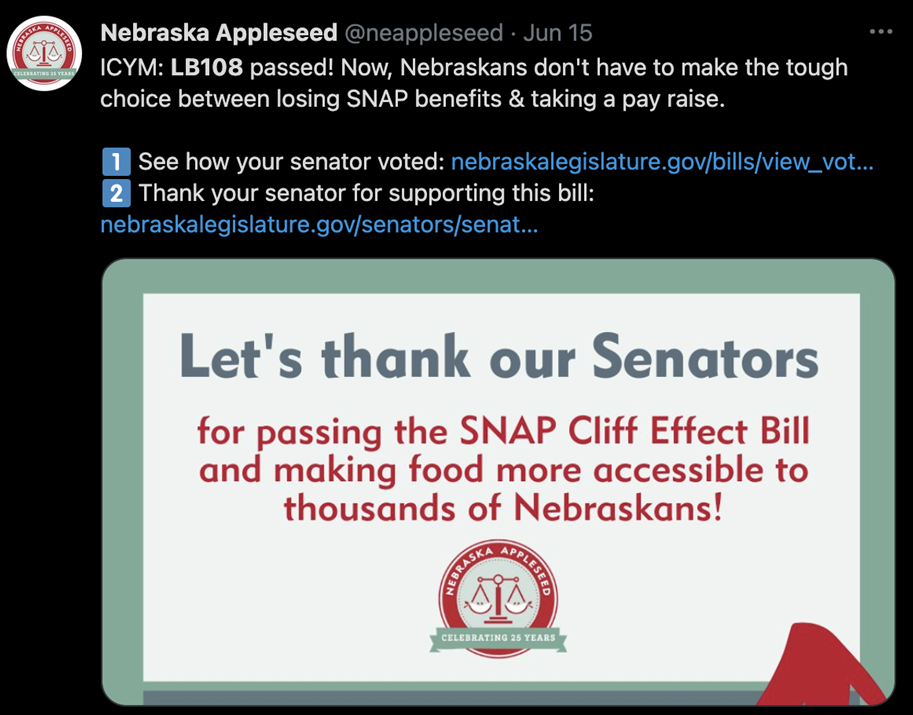 “Because of just over $20 of unemployment income, I lost $430 in SNAP benefits. $430 for my son and I to purchase groceries each month...No one should be removed from the SNAP program if they are receiving unemployment benefits. It seems like a no-brainer. But that isn't the case in Nebraska. This cliff effect must end so the people of Nebraska can receive the help they deserve.” —Chrisanne D.

Stories from community members like Chrisanne are what pushed Nebraska Appleseed to eliminate the SNAP “cliff effect” in Nebraska, which we successfully achieved with support from CSPI in May 2021.

Nebraska Appleseed has been fighting for justice and opportunity for all Nebraskans for over 25 years. We take a systemic approach to complex issues – such as poverty, child welfare, immigrant inclusion, and health care access – and we take our work wherever we believe we can do the most good, whether that’s in the courthouse, at the Capitol, or into the community. Utilizing a multi-strategy approach, we create positive change impacting thousands of Nebraskans each year. A few examples of major accomplishments include:

Nebraska Appleseed operates statewide, working with many rural communities and the urban centers of Lincoln and Omaha. We primarily work with and serve low-income communities; immigrants, refugees, and communities of color; and youth and families with experience in the child welfare system.

Our Campaign to Improve SNAP in Nebraska

Nebraska Appleseed has been thrilled to partner with the Center for Science in the Public Interest to fight hunger in Nebraska and increase access to the Supplemental Nutrition Assistance Program (SNAP) this year. SNAP plays a crucial role in addressing hunger and ensuring low-income families can put food on the table, helping more than 1 in 10 Nebraskans each year. Yet, there are a number of barriers that prevent thousands of food-insecure Nebraskans from accessing or receiving the benefits they need. Through this campaign, we have been working with impacted community members, grassroots supporters, and partners from across the state to pass three pieces of legislation to expand or improve SNAP in Nebraska:

We were ultimately successful in passing LB108, increasing our state’s SNAP gross income limit from 130% to 165% of the Federal Poverty Level (FPL) – meaning over 3,500 Nebraska households are now able to take a raise or promotion at work and not lose critical food benefits!

This major policy win required many months of hard work by the powerful affected community member advocates who shared their lived experiences and the importance of these issues; a coalition of nearly 15 advocacy and direct service organizations; and a champion senator (Sen. John McCollister of Omaha, NE) to succeed – including overcoming a gubernatorial veto.

We also had to make some compromises, such as agreeing to the use of American Rescue Plan Act funds exclusively to fund the change, a sunset provision, and requiring referrals for participants to Nebraska’s Next Step program (which provides employment supports). However, we will be working diligently over the next year to advocate for the continuation of this law, with full funding and without unnecessary barriers, through 2023 and beyond. We will also continue our efforts to advance LB121 and LB356, which are still alive and in committee, next year during the second half of Nebraska’s legislative session.

To spotlight the critical work of engaging impacted communities in this effort, our organization made early and intentional partnerships with BIPOC-led and serving groups to build advocacy capacity and share strengths. Their participation in Nebraska’s SNAP advocates coalition and deeper engagement within their communities led to broader advocacy, deeper connections within the state, and a more impactful result.

This blog was authored by Eric Savaiano (he/him/his), Economic Justice Program Manager – Food & Nutrition Access at Nebraska Appleseed. This is the second in a series of posts highlighting our campaign partner organizations.