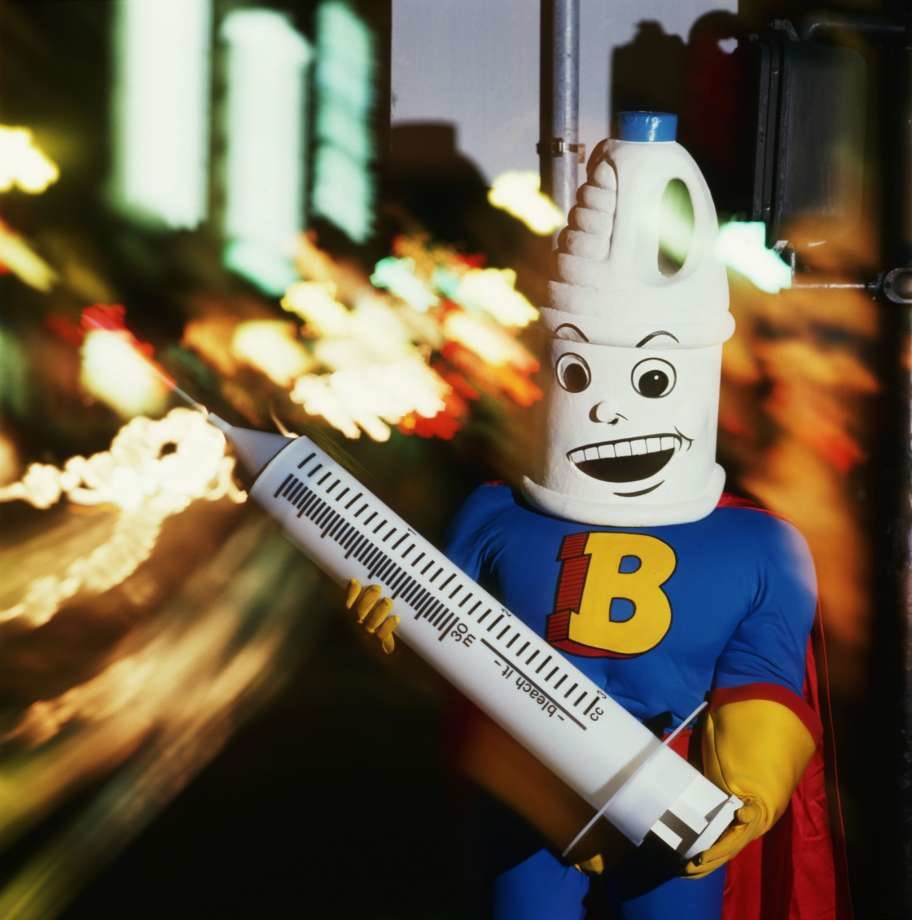 By now you’ve doubtless heard about last week’s shambolic press conference in which President Trump touted the purported benefits of injecting bleach as a potential cure for COVID-19. Yes, he did actually suggest that. Let me quote: “And is there a way we can do something like that, by injection inside or almost a cleaning. Because you see it gets in the lungs and it does a tremendous number on the lungs. So it would be interesting to check that.”

No, it wouldn’t. Bleach is well known to do damage to the esophagus and lungs (a “tremendous number,” one might say), and to cause liver damage and dehydration. This makes it a poor candidate for the task of treating coronavirus, as most of us probably recognize.

Less well known is bleach’s checkered past. I first encountered it in San Francisco in the early 90’s when the household stain remover was drawn into a different (but just as unscientific) debate: whether needle exchange programs prevented HIV infection among drug users, their sex partners and their children. Precluded by law from distributing fresh syringes using federal dollars, advocates turned to bleach as a method for disinfecting syringes. In San Francisco, they even developed a cartoon-like proponent named Bleach Man, pictured above in full regalia.

The regimen of disinfection proved onerous and time-consuming, and was impractical when drug users were in the throes of painful withdrawal. And it obscured one obvious fact: no amount of disinfection could yield an injection device more free of HIV than an unused syringe.

After that, bleach retreated into the obscurity of laundry closets, emerging only episodically when promoted as a cure for autism, cancer and—ironically—HIV/AIDS, by groups like the Genesis II Church and the notorious Q-Anon conspiracy theorists. Indeed, even before the President got in on the act, the Church was promoting a form of bleach called chlorine dioxide to prevent and treat COVID-19 under the name Miracle Mineral Solution, a practice that earned it a Warning Letter from the Food and Drug Administration and the Federal Trade Commission. Just days before Trump went public with his data-free musings, a federal court ordered the Genesis II Church to cease promoting the product for COVID-19.

After being admonished by the court, the Church turned round and wrote to the President touting the product’s purported benefits. Whether that played a role in his pronouncements is unclear. But the President’s comments did produce a spate of calls to Poison Control Centers related to bleach exposure.

It wasn’t the first time the product had kept the Poison Control Centers on their toes during this pandemic. Three days before the President’s remarks, the Centers for Disease Control and Prevention, part of the President’s own executive branch, announced an alarming uptick in bleach exposures associated with the pandemic being reported to Poison Control Centers, including one woman was exposed by washing vegetables in a bleach solution. In early April, CSPI advised against the practice.

Bleach is great for removing stains. Let’s keep it in the laundry closet and out of our medicine cabinets.