You are not the most important customer of supermarkets 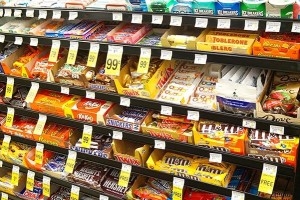 Well, pay-to-play is business as usual in today’s supermarkets.

Big grocery chains charge food manufacturers thousands of dollars to rent out the most desirable space on their shelves. That leaves a lot of small companies out of luck and blocks you from seeing some healthier food options.

“It’s sad,” says a food company executive, who wishes to remain anonymous. “The country is demanding healthier products, but…it doesn’t make a difference how good a product is for you or how much people might like it. If you don’t have the money, you can’t play the game. You’re buried in the back of the store—if you can get inside at all.”

One chance to buy vegetables, many opportunities to buy junk food

Forget to pick up broccoli at the produce department? You’ll have to wheel your basket all the way back to the entrance to find the vegetables.  Forget, however, to buy soda? That’s different. You’ll encounter soft drinks many times on your trip through the store because companies pay the supermarkets big bucks to get displayed all over.

Rigged, a new exposé from the Center for Science in the Public Interest (Nutrition Action’s publisher), details these industry practices and how they influence what you buy and eat. Click here to download a free copy of Rigged.

Here’s the story of one small company that tried to take on the Goliaths of the packaged-foods industry.

A few years ago, Jon Gordon bought a high-​grade ice cream maker with the idea of producing sugar-free ice cream. The Southern California entrepreneur had dropped his pint-a-day habit after his doctor warned that he was at risk for type 2 diabetes.

Jon had a winner? Hardly.

The average supermarket allots the shelf space behind maybe 24 freezer doors to frozen desserts, Gordon calculated. And 22 of them were stocked with Nestlé or Unilever products or store brands.

What Jon was up against

“That left only about two doors for the rest of us,” says Gordon. The competition was fierce, “meaning the stores could charge what they wanted to get space on one of those shelves.”

Jon Gordon’s company couldn’t compete with the deep pockets of Nestlé and Unilever and eventually filed for bankruptcy. “You don’t start a food company thinking you have to deal with payola, but that’s what it was all about,” he says.

Why do supermarkets insist on pay-to-play?

And food-industry heavyweights like Coca-Cola, PepsiCo, Mars, and Mondelēz (which makes Oreos, Chips Ahoy, Triscuits, Nabisco) like the fees because it favors the big players.

“We absolutely loved them because it lets you lock up a space,” says a former top marketing executive at Coca-Cola, who asked not to be identified.

“Make no mistake,” explains Herb Sorensen, a longtime supermarket consultant. “The suppliers are the store’s real customers. They’re willing to pay for access to the traffic a good store attracts.”

Find this article about food choices in supermarkets interesting and useful? Nutrition Action Healthletter subscribers regularly get sound, timely information about staying healthy with diet and exercise, delicious recipes, and detailed analyses of the healthy and unhealthy foods in supermarkets and restaurants. If you’re not already subscribing to the world’s most popular nutrition newsletter, click here to join hundreds of thousands of fellow health-minded consumers.