Why does FDA allow companies to add phosphates to foods without showing they’re safe?

Obesity, hypertension, diabetes, smoking. All are known to increase the risk of kidney disease.  Now a number of scientists are worried that the list should also include the phosphorus in our food. 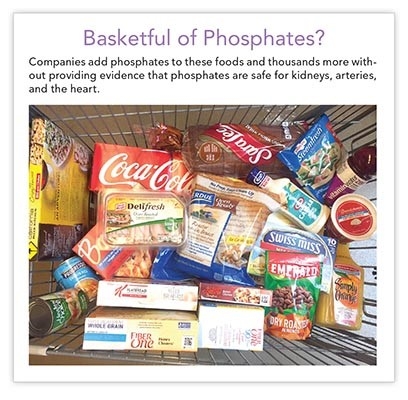 Too much phosphorus is clearly a problem for people who already have damaged kidneys.

“We’ve known for a couple of decades now that people with chronic kidney disease tend to retain phosphorus, and that leads to cardiovascular disease and worse kidney function,” says Jaime Uribarri, professor of nephrology at Mount Sinai Hospital in New York.

What about people with normal kidneys?  “The picture is not perfectly clear, but several pieces of evidence suggest harm,” explains nephrologist Geoffrey Block, associate clinical professor in medicine at the University of Colorado Health Sciences Center.

For example, among roughly 2,270 participants without kidney disease in the Framingham Heart Study, people with blood phosphorus levels at the higher end of the normal range (4 mg/dL or more) were twice as likely to be diagnosed with chronic kidney disease over the next 25 years.

Several studies report a higher risk of arterial stiffness, heart failure, or death from cardiovascular disease in people who have higher blood phosphorus levels and, in most cases, no kidney disease.

“Those findings are by no means universal,” says Block, “but they’re seen in a large body of evidence.”

Phosphorus occurs naturally in meat, poultry, grains, dairy, and many other foods. But in recent decades, companies have started adding phosphorus-containing compounds—like sodium phosphate and phosphoric acid—to thousands of foods. In a 2010 survey of roughly 2,400 branded grocery items, 44 percent had added phosphorus.

Why do companies add phosphorus?

“Phosphates have so many different functions—homogenizing, smoothing, water retention, a leavening agent, and more,” says Mona Calvo, a nutrition scientist formerly at the Food and Drug Administration.

Several years ago, Alex Chang and his colleagues at Johns Hopkins University looked at how much phosphorus people in the National Health and Nutrition Examination Survey (NHANES) ate. NHANES is a representative health survey of the U.S. public.

One out of three participants ate more than 1,400 mg a day— double the Recommended Dietary Allowance.  That’s disturbing because “above 1,400 milligrams of phosphorus a day or so, we started seeing an increased risk of dying over the next 15 years,” says Chang.

Too much phosphorus may calcify the kidneys. “As more phosphate goes through the kidney, it accelerates micro-calcification of the kidney’s tubules,” Block explains. That can depress kidney function and also increase the risk of fatal heart attacks.

Is the evidence strong enough to say that high phosphorus levels cause kidney damage? “We have pretty universal agreement that phosphates added to foodscould cause harm,” says Block. “But the data are not conclusive.”

To get good answers, scientists need to see if people without kidney disease who consume more phosphorus are at greater risk.

Knowing how much phosphorus people eat is nearly impossible.

For instance, we absorb more phosphorus from some sources than from others.

He and others want Nutrition Facts labels on food packages to say how much phosphorus a food contains. That’s crucial for people with kidney disease, many of whom have to limit phosphorus.

Without food labeling, “it’s impossible for people to restrict their phosphate intake to a certain level,” says Block. “Honestly, there is no way a human being can figure it out.”

A more basic question: Why does the Food and Drug Administration allow companies to add phosphates to foods without showing that levels in the food supply are safe?

“We’re exposing people to a possible risk for decades without doing anything,” says Block. “The onus should be on companies to show that the phosphates added to foods don’t cause harm.”

Find this article about the phosphorus and phosphates in food interesting and useful? Nutrition Action Healthletter subscribers regularly get sound, timely information about staying healthy with diet and exercise, delicious recipes, and detailed analyses of the healthy and unhealthy foods in supermarkets and restaurants. If you’re not already subscribing to the world’s most popular nutrition newsletter, click here to join hundreds of thousands of fellow health-minded consumers.