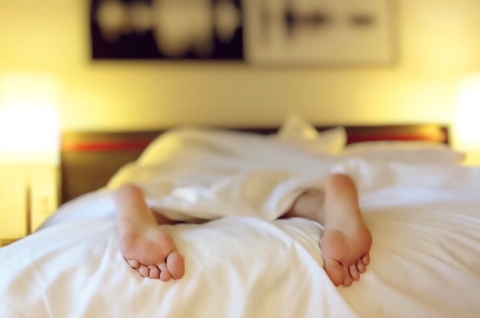 Elephants need only three to four hours of sleep a night, while mice sleep 14 hours. Humans are somewhere in the middle.  But for many of us, sleep is never long enough or good enough. Here are three important health benefits from getting needed rest that you may not know about.

It’s clear that mice need their sleep. When scientists allow mice that have been bred to have Alzheimer’s disease to sleep only four hours a night, their disease get worse.  “Sleep restriction leads to a faster accumulation of the toxic protein beta-amyloid,” says Andrew Lim, assistant professor of neurology at the University of Toronto.

Here’s maybe why.  Researchers at the University of Rochester in New York found that when mice sleep, the space between their brain cells expands from 14 percent of the brain’s volume to 23 percent, which may make it easier for toxic waste products and beta-amyloid to get flushed out of the brain.

“So when animals are deprived of sleep or their sleep is disrupted, less gets cleared,” says Lim. Whether sleep does similar housekeeping in the human brain is harder to investigate, but researchers are finding clues.

“This suggests the possibility that, especially in the roughly 20 percent of the population with the high-risk version of the APOE gene, having uninterrupted sleep may protect against the future risk of Alzheimer’s.”

But it’s still not clear if inefficient or interrupted sleep causes dementia or if dementia disrupts sleep. “We need randomized trials to be sure,” says Lim.

“People who sleep more than seven hours a night, or who are more sleep-efficient, are much less likely to develop colds,” notes Sheldon Cohen of Carnegie Mellon University. Sleep efficiency is the percentage of time in bed spent asleep.

“We followed healthy volunteers for a couple of weeks to measure their typical sleep patterns, and then we brought them into the lab and gave them nasal drops that contained a cold virus. We tracked them for five or six days to see who developed a cold and who didn’t.”

People who averaged less than seven hours of sleep a night were three times more likely to develop a cold than those who averaged eight hours a night.

Thirty or 40 years ago, who would have suspected that too little sleep could show up on your bathroom scale? Today, we sleep less and weigh  more…and the two may be related.

The average American now sleeps one or two hours less per night than he or she did 40 or 50 years ago. In 1960, an estimated 16 percent of young adults slept fewer than seven hours a night. Today it’s around 37 percent.

“We now have lots of studies on sleep and obesity,” explains Kristen Knutson, assistant professor of medicine at the University of Chicago. “And most find that short sleepers are more likely to be obese than longer sleepers.”  A “short sleeper,” she notes, is “someone who typically sleeps fewer than six hours a night.”

But the link is stronger if you look at just five-hour-a-nighters.

Hungrier after too little sleep

To find out how sleep deprivation might alter fat deposits, Knutson and her colleagues enrolled volunteers who slept overnight in a laboratory. When they were allowed to sleep for just four hours a night for one or two nights, the researchers saw more ghrelin (a hormone that increases appetite) and less leptin (a hormone that tamps down appetite) than when the volunteers were allowed to sleep for nine hours.

“We also asked each person, ‘Are you hungry?’ during the day,” notes Knutson. “People were hungrier after two days of short sleep than after the long sleep.”

In a month-long study, volunteers were confined to a lab and allowed to sleep for 5½ hours a night or 8½ hours a night. When they slept for the shorter time, they ate an average 1,090 calories a day from snacks. They got these extra calories mostly from high-carb snacks like pretzels, chips, crackers, popcorn, snack bars, muffins, cookies, pudding, ice cream, and candy. When they slept for the longer time, they averaged only 870 calories a day from snacks.

“The less people are allowed to sleep, the more they snack, and it’s not just because they’re awake for more hours,” says Knutson.

Why would lack of sleep lead to less leptin and more ghrelin? “Sleep restriction is associated with increased sympathetic nerve activity—the flight-or-fight response,” explains Knutson. That stress response “could explain why sleep affects not just leptin secretion but glucose metabolism and insulin resistance.”

And insulin resistance—which means that the body’s insulin does a lousy job of lowering blood sugar levels—raises the risk of heart disease and diabetes.

What’s the next step? “To see if extending sleep will make good things happen,” she says. “Does it benefit insulin resistance, blood pressure, inflammatory markers, and appetite hormones?”