Sugar in Drinks May Be Good for Stress, But Bad For Everything Else

Is the natural sugar in drinks like fruit juice as bad as the sugar in a soda? The answer may surprise you. 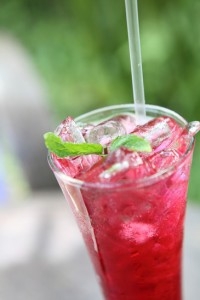 Is the natural sugar in drinks like fruit juice as bad as the sugar in a soda? The answer may surprise you.

Even modest doses of high-fructose corn syrup (HFCS) raise LDL (“bad”) blood cholesterol and other risk factors for heart disease and gout in just two weeks. The results are similar for added regular sugar in drinks.

Researchers fed 85 adults aged 18 to 40 beverages sweetened with enough high-fructose corn syrup to supply 0, 10, 17.5, or 25 percent of their calories for two weeks. Beverages with 0 percent HFCS were sweetened with aspartame. (On average, adults aged 20 to 60 get about 13 percent of their calories from HFCS, table sugar, and other added sugars, but some get far more.)

The results of testing sugar in drinks is not surprising. The higher the dose, the higher their LDL cholesterol, after-meal triglycerides, and average uric acid levels. (High uric acid is linked to a higher risk of gout.) The differences held up after the researchers accounted for the slight weight gain in the group that got the highest dose of HFCS.

What should you do? Cut back on all added sugars. Although this study didn’t test ordinary table sugar, it has roughly the same amounts of fructose and glucose as HFCS.

Why we keep coming back to sugar in drinks

Sugar may help curb stress, and that may keep us coming back for more. Researchers randomly assigned 19 women aged 18 to 40 to drink beverages (supplied by the study) three times a day with meals. About half got drinks that were sweetened with sucrose (table sugar), while half got drinks sweetened with aspartame. After two weeks, the participants were given a math test that’s designed to cause stress.

The results may explain why many people seek out sugary foods when they’re stressed.

What should you do? When you’re stressed, think twice before you reach for sweets…or stop after just a few bites and go for a walk. There’s more than one way to deal with stress.

The lowdown on fruit juice

“People have known for a long time that sugar in drinks isn’t necessarily good for you,” says  Harvard’s Walter Willett. But 40 years ago, most experts were mostly worried that sodas would rot your teeth.

“Sugar in drinks is much more of a problem than it was 30 years ago,” adds Willett. “That’s because we drink more, we’ve gained weight, and we’re moving less.”

“It’s the amount of beverage consumed, and the interaction with underlying insulin resistance due to inactivity and overweight,” he explains. “On top of that, we’re consuming too many carbohydrate calories in general, and they’re easier to over-consume in a beverage form.”

Even fruit juice has lost its all-you-can-drink clean bill of health.

In a study of 51,000 women, those who increased their juice consumption over four years gained more weight (about nine pounds) than those who cut back on juice (about five pounds). And women who drink more orange juice have a higher risk of gout.

Juice is clearly more nutritious than soft drinks, but it’s still liquid calories that don’t curb your appetite as much as solid foods do.

“Juice is a little complicated because if someone is low in vitamin C and has a small glass of orange juice every day, that’s a plus,” says Willett. “The problem is that many people consume juices as their primary beverage.” And they drink 8 to 16 ounces at a time, not the classic six-ounce juice glass.

“If you’re highly lean and athletic, you can tolerate three or four glasses of juice a day,” explains Willett. “But that doesn’t describe most of the American public. For many people who drink multiple glasses a day, the harm starts to outweigh the benefits.”

When a group of scientists issued advice on beverages in 2006, he notes, “we recommended not more than one small glass of juice a day.”