Some dietary fibers are better at helping with regularity 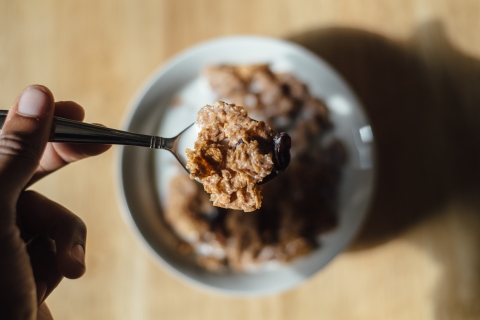 What’s the best strategy if you’re having trouble with regularity? High-fiber foods can help, but it’s not just a matter of checking the “Dietary Fiber” number on the food label. There’s more to it than that.

“Back in  1985, we studied people on their regular diets, which had 22 grams of fiber, or on a liquid diet with 30 grams of fiber,” says Joanne Slavin, professor of nutrition at the University of Minnesota. (The liquid diet was Ensure with added fiber.)

“Their stool weights were bigger on their regular diets than on the liquid diet. So we know that other things in food besides just the number of grams of fiber affect stool weight. And generally, bigger stools make you less likely to have constipation.” Prunes—or, as the industry prefers to call them, dried plums—also have more than fiber going for them. “There’s no question that prunes work,” says Slavin. “They’re interesting because they have not only fiber, but also sugar alcohols and maybe other chemicals that matter.”

Sugar alcohols can keep things moving through the gut because they retain moisture, which can soften stool in small doses. “But if you eat a large dose of sugar alcohols, some will reach the large intestine and get fermented by bacteria,” explains Slavin. “And that can cause gas and potentially diarrhea.”

What about inulin, a key fiber in many Fiber One foods and some fiber “gummies”?

“If you look at stool weight, inulin’s impact is at the low end,” says Slavin. “And inulin gets fermented, so it does increase intestinal gas.” Does that mean it’s useless for regularity? The answer isn’t clear. Consuming a big 20 gram dose every day for three weeks increased fatulence, but had no effect on regularity.

“Inulin may make stool softer because the fermentation produces more bacteria,” says Slavin. But the evidence is muddy.

What’s most likely to work? “I’ve worked on fiber for 40 years,” says Slavin. “When I started, I thought, ‘We should get this baby wrapped up in about five years.’ But we haven’t made a ton of progress on laxation. There aren’t a lot of studies, many are small, and the results are inconsistent.”

“If my goal were to increase stool weight, I’d pick wheat bran or psyllium,” says Slavin. “Wheat bran is best,” she adds. “Each gram of bran means 4 or 5 grams of stool. That’s because the bran fiber isn’t broken down in the gut, and it binds water, which adds fecal bulk.”

Psyllium is the fiber in Metamucil, and it supplies some of the fiber in Kellogg’s All-Bran Buds. “Psyllium definitely works,” says Slavin. “It’s an over-the-counter laxative.”

“Some people just want to take a laxative and be done. But they’d be better off if they eat a bowl of bran cereal with milk and throw some blueberries on it,” she suggests. Whether it’s the seeds or skins or sugar alcohols or fiber in grains, beans, vegetables, and other plant foods, something in there helps keep things moving.”

The bottom line: Don’t rely only on the “Dietary Fiber” number on Nutrition Facts labels to find foods that are good for regularity. Instead, try foods with wheat bran or psyllium…or that old standby, prunes.

This article was originally published in 2015 and is updated as needed.

Find this article about dietary fiber interesting and useful? Nutrition Action Healthletter subscribers regularly get sound, timely information about how nutrients can affect their health. They also receive science-based advice about diet and diabetes, heart disease, cancer, osteoarthritis, and other chronic diseases; delicious recipes; and detailed analyses of the healthy and unhealthy foods in supermarkets and restaurants. If you’re not already subscribing to the world’s most popular nutrition newsletter, click here to join hundreds of thousands of fellow health-minded consumers.