Salt in Soup Gives You More Than Flavor

Why is there so much salt in soup and other canned goods? The reasons may not be worth the risk. 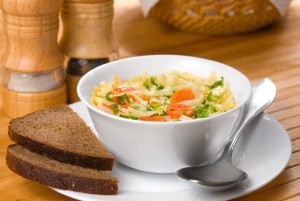 Why is there so much salt in soup and other canned goods? The reasons may not be worth the risk.

Canned soups are loaded with salt. Why is there so much salt in soup? Because it’s a lot cheaper than the flavorful vegetables, chicken, herbs, and spices that you would use at home.

Plus, when commercial soups are cooked at a high temperature for a long enough time to kill potentially harmful bacteria, some of the natural flavors evaporate. Salt is a cheap, convenient way to make up for the loss.

It’s not just soup. All canned foods are cooked to within an inch of their lives at the packing plant. It’s not because companies don’t know how to regulate their ovens. Canners need to use a temperature high enough for a long enough time to kill any harmful germs. Out with the heat goes taste.

Salt in soup gives you more than flavor

What is the problem with all this salt in soup and canned goods? Salt raises blood pressure, which boosts the risk of heart attacks and strokes. And high blood pressure, or hypertension, is epidemic in the United States. What else would you call a problem that afflicts more than half of people over age 60?

Nevertheless, the food industry keeps dumping salt into our food, especially restaurant food, as though advice to cut back – from the Surgeon General, the American Heart Association, and the National Heart, Lung, and Blood Institute—didn’t exist.

Soup is one of the worst offenders because it crams so much sodium—roughly 1,000 milligrams per serving—into a food that often has just 100 calories.

Researchers aren’t sure why. “Soups may make us feel full,” says Purdue’s Richard Mattes, “because they’re viewed as nutritive and substantial.”

How can you enjoy soup without all the salt?

Make your own soup, buy lower-sodium soup, or try this:

Voila! It may have more sodium than homemade, but you get less salt in soup this way—and more vegetables—than in canned soups.

From salt in soup to salt in bread

There isn’t much that goes better with a bowl of soup than a wedge of fresh, hot bread. But can you cut the amount of salt in bread? Are you worried that lower-salt bread won’t taste good?

When researchers offered 38 young people bread that was gradually cut in salt each week, first by 31 and then by 52 percent, they ate no less bread than 39 young people offered bread with no sodium cuts. Only when the researchers cut salt by 67 percent did the people eat less bread.

However, when the scientists replaced some of the bread’s salt (sodium chloride) with potassium chloride and yeast extract, even a 67 percent drop in sodium didn’t curb bread intake.

Look for lower-sodium breads. Aim for about 100 milligrams or less per slice. Many breads hover around 200 mg per slice.