A more appealing way to do weight-lifting exercise

And get the same benefit. 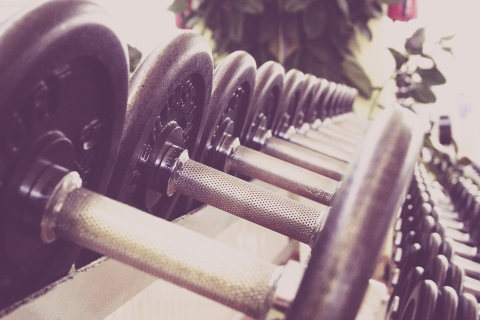 You know that lifting weights regularly is important to maintaining our strength and independence as we grow older. But the thought of lifting a heavy load with our arms or our legs again and again is not very appealing to a lot of people. Little wonder that you hear people groaning in the gym. Plus, for some of us, our joints may protest at the strain.

Researchers at McMaster University in Ontario, Canada, have discovered a new way of doing weight training that many people will find easier to tolerate and which may produce the same benefits as the traditional method.

For years, the McMaster exercise scientists had noticed that people who lifted lighter weights seemed to get just as strong as people who lifted heavier weights. That runs counter to the muscle-building dogma that you need to lift as heavy a load as you can tolerate to get the best results.

So the researchers decided to test this notion in a good study.

Choosing exercise novices would complicate matters because everyone benefits from starting a program of weight-resistance exercise. So they decided to study people who had already been lifting weights for at least a year, in this case 49 young men.

The men were randomly assigned to two groups. One group followed the conventional approach: take the greatest weight they could lift one time, then lift 75 percent to 90 percent of that weight as many times as they could until they could do no more. That was usually about 8 to 12 times (called “reps” or repetitions).

The other group used weights that were only 30 percent to 50 percent of what they could lift one time, but they also did this to exhaustion, usually about 20 to 25 times.

The men did this three times a session, four times a week, for three months.

At the end of the study, the size and strength of the men’s muscles had increased equally in both groups. Lighter weights were just as good as heavier weights for building muscle.

The key is doing the exercise to exhaustion, researcher Stuart Phillips told The New York Times. There’s something about exhausted muscle tissue that triggers the growth of more muscle, he explained.

So keep doing the exercise until the effort on the final lift is at least an eight on a scale of one to ten. “There should be some discomfort,” Phillips explained.

It’s not clear yet if these results also apply to middle-aged and older people, but we know from past research that weight lifting increases muscle strength no matter how old you are.

One possible bonus of using lighter weights is a lesser chance of injury, though that hasn’t be shown yet in a study.

Find this article about muscle-building exercise interesting and useful? Nutrition Action Healthletter subscribers regularly get sound, timely information about how nutrients can affect their health. They also receive science-based advice about diet and diabetes, heart disease, cancer, osteoarthritis, and other chronic diseases; delicious recipes; and detailed analyses of the healthy and unhealthy foods in supermarkets and restaurants. If you’re not already subscribing to the world’s most popular nutrition newsletter, click here to join hundreds of thousands of fellow health-minded consumers.