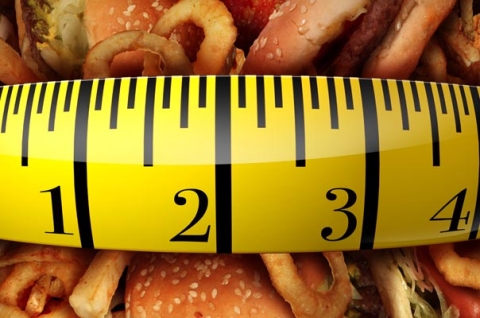 Kevin Hall is a senior investigator at the National Institute of Diabetes and Digestive and Kidney Diseases. Trained as a physicist, Hall leads a team of mathematicians, neuroscientists, and dietitians who study metabolism and weight. He spoke with Nutrition Action’s Bonnie Liebman.

Q: What caused the obesity epidemic?

A: Our working model to explain the U.S. obesity epidemic is what we call the push hypothesis, because a combination of factors has pushed calories into the food system and subsequently changed what we eat, how much we eat, and our overall eating habits.

Calories in the food supply have consistently risen since the onset of the obesity epidemic in the 1980s. The rise in calories per person is much more than enough to explain the increase in body weight.

A: Not likely. Some people have demonized individual nutrients like carbs or fat and have proposed plausible theories for how they cause obesity. For example, the carbohydrate-insulin model of obesity predicts that carbohydrates increase insulin secretion, which sequesters calories into fat tissue, and that causes people to be hungry and decreases the calories that they’re burning.

We’ve done a lot of work on that model, but the predictions didn’t turn out to be true. Of course, carbs almost certainly have contributed to obesity, but the carbohydrate-insulin model is unlikely to explain how.

Q: What about fat?

A: Experiments seem to support the idea that higher-fat diets lead to weight gain. If you covertly increase the fat content of people’s diets, they will eat more calories. And people seem to very efficiently store that extra fat.

And yet, when people were told to eat a lower-fat diet in the 1990s, that didn’t seem to prevent the rise in obesity, in part because some people replaced some fat in their diets with refined carbohydrates.

A: Not likely. Fat in the food supply went up. And so did refined carbs. We were exposed to more carbs and more fat and a little bit more protein in the food supply, and we probably ate all of those in excess.

Q: How much have calories gone up?

A: Calories in the food supply have increased by about 500 to 800 per person a day. But we’re wasting more food. So about half to two-thirds of the increase went into the trash. The rest generated the obesity epidemic.

We believe that the average adult in recent years is eating about 250 to 300 more calories a day than in the 1970s. That’s at a population level. People who have obesity are likely eating many more additional calories.

Q: What caused calories in the food supply to increase?

A: We can’t prove cause and effect, but increased crop yields, changes in subsidies, and other policies generated a dramatic increase in the production of corn and soybeans in the 1970s and 1980s. Calories in the food supply started climbing around 1980. So did the percentage of adults who are overweight or obese.

A: The Nixon administration had to deal with complaints about food prices going up. So USDA made some dramatic changes to alter the incentives for farmers to produce as much as they could.

And who could blame USDA? Those officials lived through the Great Depression, when people were starving. I’m sure the idea that you could create an obesity epidemic was not on their minds.

So with all good intentions, policy changes generated this flood of cheap commodity crops.

Q: And that led to supermarket aisles stacked with processed foods?

A: Yes. It’s not like we’ve had a flood of soybeans and corn on the cob in the supermarket. The changes drove down the price of ingredients like high fructose corn syrup. And ingenious engineers figured out how to make stable, convenient, inexpensive, and tasty processed foods. A: Yes, and some were positive. For example, changes in the food supply allowed more women to enter the workforce and not be expected to prepare all of the family’s meals from scratch.

But some changes have not been so positive. One is that we eat out more at restaurants, which is a pleasant experience, but we have less control over what we’re eating. We snack more, and we eat more convenience foods—which you only need to heat as opposed to cook.

Q: Why is that a problem?

A: To compete, companies want to make their foods as tasty as possible. Those foods are often high in salt, sugar, fat, and flavor additives and are engineered to trigger a supernormal appetite.

And many restaurants serve larger portions, especially when the price of the ingredients is low. As consumers, we’re always willing to pay less to eat more.

And there has clearly been a rise in the fraction of our calories that comes from ultra-processed foods. A: Exactly. They’re refined foods that are subjected to industrial processing to increase convenience, availability, or shelf life. We’re now doing studies to look at their health effects. Q: What will your studies look at?

A: In the first study, volunteers spend an entire month living at the NIH Clinical Center, where we provide them with one of two diets that have the same amounts of protein, fat, carbs, sugar, sodium, and fiber per calorie. In one diet, the foods are whole and unprocessed. In the other, they’re ultra-processed.

Folks eat as much or as little as they want of each diet for two weeks at a time. We want to see if people eat more calories during the two weeks when they’re eating the ultra-processed diet and if that affects their metabolic health. Does it generate a change in their whole body insulin sensitivity, for example?

Q: Are they overweight or obese?

A: Not necessarily. But in the second study, they’ll all be male and have overweight or obesity. For one month they’ll eat an ultra-processed diet. For the other month, they’ll eat a whole foods diet.

In this study, people have to eat all of the food that we’re giving them and nothing else. And we’re doing a much more detailed assessment of insulin sensitivity in muscle, fat tissue, and liver.

Q: Why is it so hard to lose weight and keep it off?

A: That’s what we’re trying to understand. When we studied “The Biggest Loser” contestants, we found that the number of calories that people burn drops as they lose weight.

But we also know that hormones—for example, leptin, ghrelin, and other hormones that are released by the gut—are sending feedback to the brain and controlling appetite.

A: Yes. When people lose weight, leptin goes down and ghrelin goes up. Those changes are persistent. But no one had quantified how important those feedback signals are for controlling appetite.

So we did a study where we collaborated with a pharmaceutical company that had a drug that increases the amount of calories that people were losing in their urine without their knowing it.

Q: They got either the drug or a placebo?

A: Exactly. We wanted to see how their bodies compensated for the loss of calories and weight. We didn’t measure appetite by asking people how hungry they were. Instead, we objectively measured how many additional calories they ate over the course of the one-year study.

And we found that when people were losing weight, their appetite increased by about 45 calories a day above baseline for every pound of weight that they lost.

Q: So if they lost 10 pounds, their increased appetite pushed them to eat 450 more calories a day?

A: Yes. Meanwhile, the number of calories that they were burning went down by between 10 and 15 per day for every pound of weight they lost.

Q: Is that why many dieters inch back to their original intake after about six months?

A: If somebody goes on a diet, they tend to cut a lot of calories initially. But as they lose weight, they’re fighting a greater battle against feeling more hunger and burning fewer calories.

For the same effort, they see diminishing weight loss returns until they plateau at a lower weight after six to eight months. Often, they don’t want to keep putting in the same effort because they’re not seeing the numbers on the scale keep falling. That’s when their efforts to stick to the diet start to wane.

Q: Because they lost less weight than they wanted to?

A: Typically, yes. They may have wanted to lose 40 or 50 pounds but lost only 10. Even though that might be great for their health, it’s not what they wanted. So they think, “Why am I sticking to this diet?”

Q: What’s your advice to dieters?

A: Choose the healthiest diet that you enjoy and that you can stick to. Right now, there’s no magic way to personalize a diet. I can’t measure something in your blood and decide that you would do better on Diet A versus Diet B. We’d love to be able to do that. And we’re working on that.

But for now, do whatever you can to improve your diet and physical activity, while honestly thinking, “This is a lifestyle that I can live with and enjoy for the rest of my life.” And let the weight changes fall where they may.

The information in this post appeared in the July/August 2018 issue of Nutrition Action Healthletter.