How to Live a Healthy Life Starting Today

If you want to know how to live a healthy life, we have a few tips to get you started. 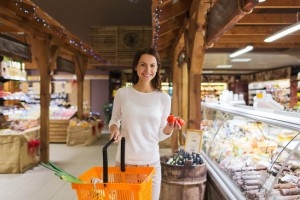 If you want to know how to live a healthy life, we have a few tips to get you started.

It’s tough to change your diet. We are creatures of habit.

Yet we change at the drop of a hat when we find a new cereal, soup, or frozen dinner at the supermarket. And we’re perfectly willing to try a new salad, sandwich, or entrée on the restaurant menu.

Maybe that’s because it’s so easy to do those things. When we wanted to know how to live a healthy life, we looked at a lot of suggestions, and made some changes. (Okay, some we’re still working on.) If any of these are new to you, why not give them a spin?

The nitrites that are added to processed meats may make them worse than other red meats. To avoid them—and to dodge some sodium—look for no-nitrite-added, lower-sodium or no-salt-added deli meats.

2. Switch to “thins” or light bread

The landmark OmniHeart study tested diets that were rich in vegetables, fruit, and low-fat dairy foods and low in saturated fat, salt, and sugar. All of them lowered blood pressure and LDL (“bad”) cholesterol.

Each had just four or five servings of grain (preferably whole grain) for someone who needs 2,000 calories a day. Instead, people got most of their carbs from vegetables, fruit, and beans. A serving of grain was just one slice of bread or a half cup of rice, cereal, or pasta. Uh-oh.

One way to stretch your grains: try thin whole-grain rolls, which have just 100 calories per bun.

Or try light breads, which have just 40 to 60 calories per slice—about half what you’d get in ordinary whole-grain breads.

People who eat more red meat have a higher risk of colorectal cancer. Seafood and poultry eaters do not.

But fish and chicken don’t taste like burgers. Some veggie burgers do.

Veggie burgers have more salt than ground beef, but at least you don’t have to worry about food poisoning from E. coli.

“People who eat a wider variety of vegetables tend to be thinner,” says Susan Roberts, director of the Energy Metabolism Laboratory at the Jean Mayer USDA Human Nutrition Research Center on Aging at Tufts University in Boston. That’s probably because the vegetables are displacing higher-calorie foods.

“Something like half of all Americans’ vegetables are iceberg lettuce, potatoes, onions, and canned tomatoes,” says Roberts. “So there’s a lot of room for increasing the variety of vegetables.”

Their omega-3 fats may protect your heart. A fatty fish like salmon or trout is best.

6. Cover half your plate with vegetables or fruit

Forget the “side” of veggies. They should occupy more plate real estate than your protein or pasta, rice, or potatoes.

Trying to cut calories? Don’t stock your kitchen with five kinds of cookies, ice cream, pastries, or other sweets. Reducing variety is a good answer if you are asking how to live a healthy life.

“Variety is one reason people eat more food at restaurants,” adds Roberts. “You never go out to eat the same thing you have in your fridge.”

Okay, you can’t just buy it. You have to wear it.

If you walk at least 7,500 steps a day, you’re in the money because you’re likely to be meeting the national guidelines for moderate physical activ­ity,” says Catrine Tudor-Locke. “Walking includes stepping, run­ning, hopping, dancing, anything that’s moving with one step following the other,” notes Tudor-Locke, who is a researcher at the Walking Behavior Lab­oratory at the Pennington Biomedical Re­search Center in Baton Rouge, Louisiana.

“Adults in the United States average just 5,000 to 6,000 steps per day,” says Tudor-Locke. “Falling below 5,000 steps is definitely a red flag, and less than 2,500 steps is a very big concern. It puts you at greater risk for chronic diseases like diabetes and for prema­ture death.”

But it’s not just the number of steps that counts, she adds. It’s also the in­tensity. “Make sure that at least 3,000 of your daily steps are at more than 100 steps per minute. People who walk at that pace in our studies are walking purposely and going some­place. That’s like tak­ing a brisk walk.”