How Food Poisoning from Eggs Happens

Can you get food poisoning from eggs? Yes, but the eggs from cage-free laying hens may not be any safer. 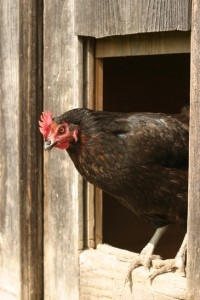 Can you get food poisoning from eggs? Yes, but the eggs from cage-free laying hens may not be any safer.

"It’s the worst thing I’ve ever been through,” Robin Shaffer recalled. “I had no energy. You’d try to keep something in you and it just comes out.”

When Shaffer ate an enchilada, bean burrito, and chile relleno combo meal at a Mexican restaurant in Bemidji, Minnesota, she had no idea that raw eggs tainted with Salmonella bacteria had contaminated her food in the kitchen. That food poisoning from eggs would knock Shaffer off her feet for three weeks. “My life was literally the toilet,” she told a local TV station.

Shaffer and six other diners at the restaurant were among the first in 2010 of what would become more than 1,600 documented victims of the largest outbreak of Salmonella enteritidis food poisoning from eggs since the government began compiling statistics in 1973.

The outbreak set off a national debate about how our eggs are produced. Is it cruel to cram hens into tiny cages, with no access to the outdoors, and with no room to nest or perch? Are “cage-free” eggs more humane? Are they less likely to make people sick?

After Robin Shaffer and restaurant-goers in at least 10 states became infected by Salmonella, epidemiologists in Minnesota and California were able to finger the likely source: two factory farms in Iowa that together produce more than a billion eggs a year.

But Wright County Egg and Hillandale Farms didn’t just supply restaurants. Their eggs were also sold in bulk to other companies that packaged them for resale in supermarkets under evocative brand names like Sunny Farms, Sunny Meadow, and Wholesome Farms.

When inspectors from the Food and Drug Administration finally descended on the two farms, what they found was anything but “sunny” or “wholesome.”

Both companies’ laying houses, which each held tens of thousands of hens, were infested with flies, maggots, wild birds, and rodents. Chicken manure was piled four to eight feet high below some of the cages. Any of that might have been the source of the food poisoning from eggs.

In fact, Congressional investigators discovered that Wright County Eggs had detected Salmonella on its equipment and in its barns at least 73 times during the previous two years. While the companies agreed to recall a half billion of their eggs, by that point most of them had probably already been eaten.

“There is no question that these farms were not operating with the standards of practice that we consider responsible,” said Margaret Hamburg, FDA Commissioner at the time.

Yet neither egg operation had ever been inspected by the FDA. (The agency rarely checks food plants.) The FDA has said since then that it intends to inspect all 600 of the major U.S. egg producers.

The owner and the Chief Operating Officer of the two egg operations eventually each paid a $100,000 fine and were sentenced to three months in a federal prison (they’re still free while their appeal continues to work its way through the courts).

Do crowded hens lead to food poisoning from eggs

Filth aside, is there a more humane way to produce the nation’s nearly 80 billion eggs each year? And, if so, is it less likely to turn out eggs that are tainted with Salmonella?

More than nine out of 10 eggs are laid by hens that are confined for their lifetimes in battery cages, typically five to eight hens to a cage. (The cages are arrayed in “batteries”—rows of cages stacked one atop another.) Within each cage, every hen has about 67 square inches of floor space, less than the size of a piece of typing paper. That’s not enough room for them to stretch their wings or engage in other activities that are natural for hens—like nesting, perching, and rolling around on the ground (dustbathing).

It’s also not enough room for them to lay their eggs like uncaged chickens can. “The birds suffer from extraordinary frustration on a daily basis,” says Paul Shapiro of The Humane Society of the United States.

“Chickens in nature have a very strong desire to lay their eggs in a private, dark, secluded nesting area, but battery cages don’t allow them to do that.

A far smaller number of laying hens live in indoor “cage-free” houses, where they can walk around, spread their wings, lay their eggs in nests, and, in some facilities, perch and dust-bathe. But most cage-free hens aren’t free to wander outside.

The list of supermarkets, food processors, and restaurants that have rejected eggs from battery cages in favor of cage-free eggs is growing. Why the movement to cage-free production?

Hens. Most companies that switch to using cage-free eggs cite its more humane treatment of laying hens. “It’s clear to us that cage-free farms, when certified to meet third-party standards, give hens more space to do as they please: scratch around, roost, and gossip about the henhouse,” says Ben & Jerry’s Ice Cream.

Eggs. Does cage-free reduce the risk of food poisoning from eggs? Are they more likely to be free of Salmonella and other contaminants? It’s not clear. “The evidence suggests that cage-free facilities have significantly lower risks of Salmonella infection,” says The Humane Society’s Paul Shapiro.

That evidence comes from Europe. In 2004 and 2005, for example, the European Food Safety Agency took samples from more than 5,300 egg-laying facilities in 24 countries.

“Across the board, it found a higher risk of Salmonella in the caged facilities,” says Shapiro.

But European egg facilities are smaller and are different in other ways, argue U.S. producers. Battery cages are the most effective way to separate hens and their eggs from bacteria-containing excrement, they maintain. And keeping five to eight birds in their own cage reduces the possibility of their transmitting disease to other hens in the flock.

“We really don’t know if there is a big difference” between Salmonella levels in caged and cage-free hens, says Jeffrey Armstrong, president of California Polytechnic State University. “Anyone who says that the evidence is clear, they’re not reading all of the scientific literature.”

Armstrong has consulted for the board of the Animal Welfare Advisory Committee of the United Egg Producers, an industry group.

Eggs are cheap enough for most people that they can probably afford to pay extra for cage-free or organic eggs that are more humanely produced than battery-cage eggs.