How to Avoid Getting Sick from Mechanically-Tenderized Meat

What to look for on the new labels. 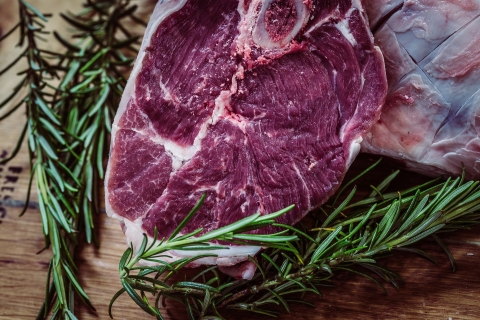 About a week after eating a medium-rare steak at a family restaurant, 87-year-old Margaret Lamkin of Iowa “started having diarrhea and it didn’t let up,” she told The Kansas City Star. Stricken with an E. coli O157:H7 infection, Lamkin was admitted to a hospital where she had her colon removed and was given a colostomy bag to use for the rest of her life.

“I had a very difficult time adapting to this bag, changing and cleaning,” she said. “Oh, we had so many accidents. It was just terrible,” she recalled.

Margaret Lamkin’s misfortune: the beef that she ate was contaminated with disease-causing bacteria by a process called mechanical tenderization and wasn’t cooked enough to kill the bacteria.

What is mechanical tenderization?

To make beef easier to chew (and to be able to charge a premium price), meat processors puncture raw beef with needles or blades to break down muscle fibers and connective tissue. About 11 percent of the beef sold in the United States is processed this way.

The needles or blades can push disease-causing bacteria from the surface of the meat deep into the muscle where the bacteria can survive if the meat isn’t cooked well enough. (Beef that isn’t mechanically tenderized doesn’t have bacteria deep inside the tissue.)

Six outbreaks of foodborne illnesses due to mechanically-tenderized beef, including one death, have been recorded since 2000 by the Centers for Disease Control and Prevention (CDC).  That doesn’t include additional outbreaks that were likely never reported or illnesses involving just one person.

Until now, consumers had little way of knowing if the kind of beef they were buying was mechanically tenderized and needed to be cooked more carefully. The needles and blades don’t leave traces and companies haven’t had to label the meat as tenderized.

Finally, after years of haggling and delay, the U.S. Department of Agriculture (USDA) is now requiring beef processors to label mechanically tenderized beef that’s sold to consumers and restaurants. And they must include on the label an explanation of the proper way to cook the meat to avoid getting sick.

(The Center for Science in the Public Interest, which publishes the Nutrition Action Healthletter, was one of the consumer groups pressing USDA to take action on this.)

So, now if you buy beef, look for any of these three terms on the label:

If you see any of these terms on the label, be sure to follow the cooking instructions to kill the bacteria that may be inside the meat. Most likely, the label will say to cook the beef to an internal temperature of 145 degrees F as measured by a meat thermometer and then let the meat sit off the heat for 3 more minutes. Or, it will say to cook it to 160 degrees F without having to let it sit for 3 minutes.

As for Margaret Lamkin, her encounter with under-cooked mechanically-tenderized beef changed her life and not for the better. She stopped flying, avoids wearing dresses, and worries about infections and odors from her colostomy bag. And she doesn’t visit her grandchildren much anymore.

Find this article about safe eating interesting and useful? Nutrition Action Healthletter subscribers regularly get sound, timely information about staying healthy with diet and exercise, delicious recipes, and detailed analyses of the healthy and unhealthy foods in supermarkets and restaurants. If you’re not already subscribing to the world’s most popular nutrition newsletter, click here to join hundreds of thousands of fellow health-minded consumers.